The claim originated in a tweet posted by @LauraKronen on November 8, 2022 (archived here), which read:

My son and I were just KICKED OUT OF BEING A FULTON COUNTY POLL WORKER because I posted on Twitter this morning that I was working at the polls to ensure a free and fair election. HELP!

Johns Creek Police arrived at the polling station in response to a "disorderly person" report about 15 minutes before the 7 a.m. opening of the voting booths, according to the police report obtained by Lead Stories. The supervising police officer wrote that when he arrived, he was told that "poll worker Laura Kronen had been relieved of her duties and asked to leave the polling place" by the poll manager and that her son was also "relieved of his duties." County elections official Nadine Williams "informed me that it was brought to her attention that Laura Kronen had made derogatory posts on her (Laura's) social media account," the officer wrote:

Also from the police report:

Fulton County Registration & Elections shared those concerns with the Secretary of State's office, who contacted us this morning with additional concerns.

After further discussion with the Secretary of State's office a decision was made by Fulton County Registration & Elections to terminate two poll workers. This decision is in alignment with our commitment to elections integrity.

While the statement did not specify what social media post triggered the firing, an elections official with direct knowledge of the decision told Lead Stories it was this now-deleted Facebook post in which Kronen boasts about being at the January 6, 2021, U.S. Capitol insurrection, The post included several images appearing to show her at the Capitol along with this text:

I stood up for what's right today in Washington DC. This election was a sham. Mike Pence is a traitor. I was tear gassed FOUR times. I have pepper spray in my throat. I stormed the Capitol Building. And my children have had the best learning experience of their lives." 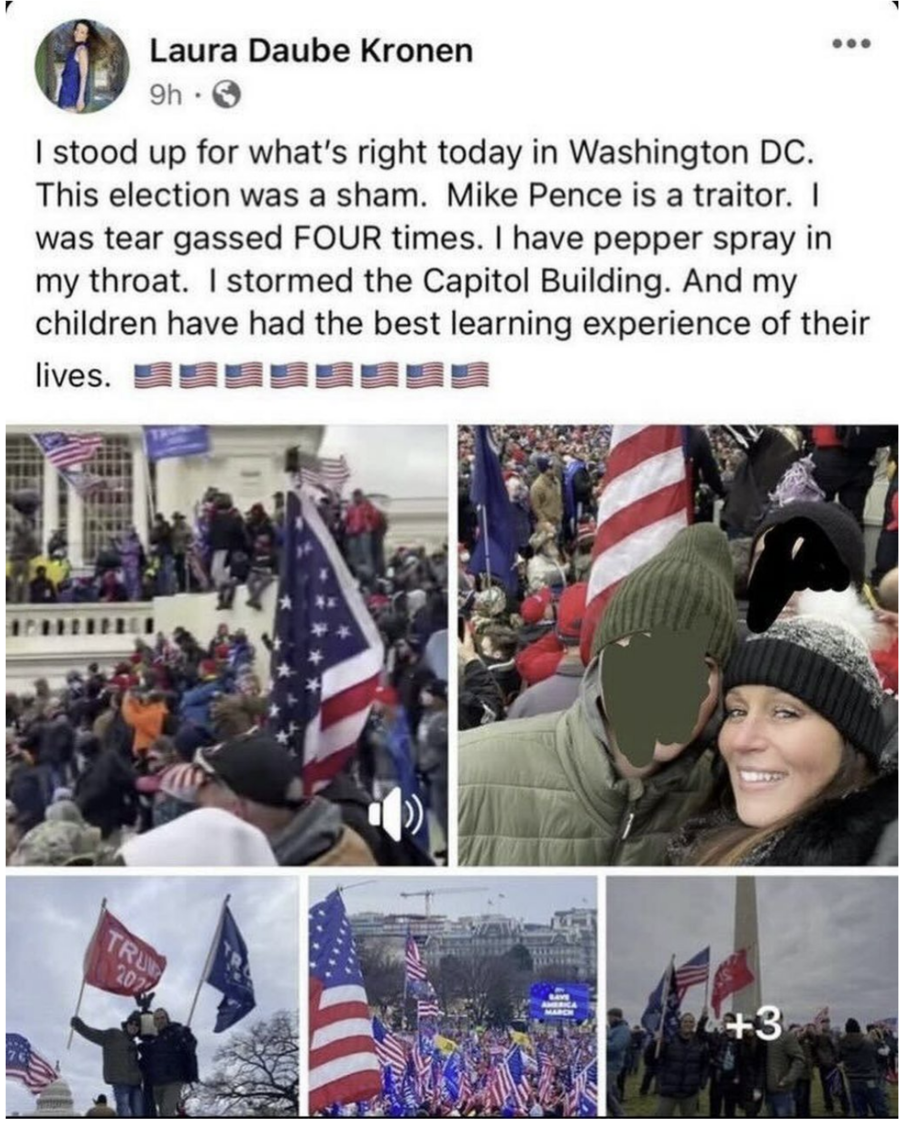 Lead Stories found other active social media posts in which Kronen confirmed she was among the protesters storming the Capitol on January 6, 2021, including this September 2, 2022, tweet:

How come they only make it seem like there were less than 10,000 people at January 6 where there were clearly over a million. (I know. I saw it with my own eyes). I also didn't see a single person enter the capitol from my vantage point.

How come they only make it seem like there were less than 10,000 people at January 6 where there were clearly over a million. (I know. I saw it with my own eyes). I also didn't see a single person enter the capitol from my vantage point.

Just got a text from the team of @ReverendWarnock As IF I'd EVER think about voting for him. pic.twitter.com/6lfPqUFOJJ

Yes. You are a slimy, shady, shifty politician. And @HerschelWalker is putting America First.

This tweet was against Democratic gubernatorial nominee Stacey Abrams:

I wonder what would fix Stacey Abrams? Any ideas?

Still, it was the Facebook post about the January 6 insurrection -- not the tweets about the current election -- that resulted in the firing of Kronen and her son, according to the election official.

A lawyer for Kronen in an email to Lead Stories on December 8, 2022, said election officials were not being truthful about why the mother and child were asked to leave the polling station:

The 'finding' of the Jan 6 post occurred well after Mrs. Kronen's (and her minor son's) 'firing' and then used as a deflection and pretext from the actual truth of them being fired -- that they were discriminated against for their conservative political beliefs.