UPDATE (8:38 PM MT): Voy Finicum (pictured below with tarp)-- the Oregon militant who gained fame for conducting a television interview from beneath a blue tarp -- has reportedly been shot and killed by law enforcement officers. 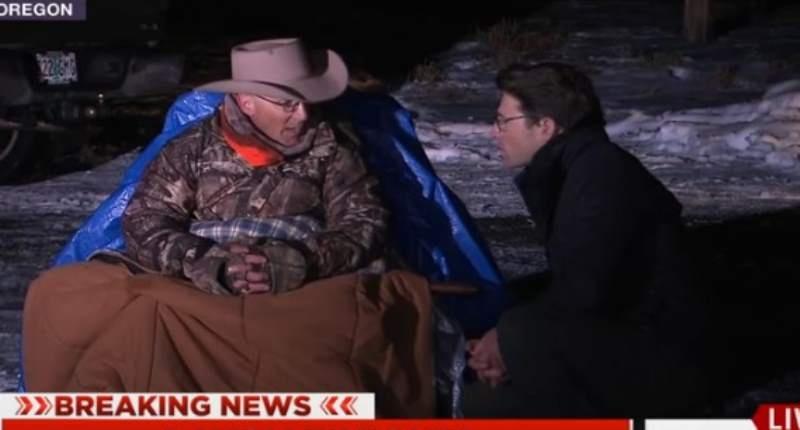 At approximately 4:25 p.m. (PST) on Tuesday, January 26, 2016, the Federal Bureau of Investigation (FBI) and Oregon State Police (OSP) began an enforcement action to bring into custody a number of individuals associated with the armed occupation of the Malheur National Wildlife Refuge. During that arrest, there were shots fired.

One individual who was a subject of a federal probable cause arrest is deceased. We will not be releasing any information about that person pending identification by the medical examiner's office.

One individual suffered non-life threatening injuries and was transported to a local hospital for treatment. He was arrested and is currently in custody.

The arrested individuals include:

These probable cause arrests occurred along Highway 395.

All of the named defendants face a federal felony charge of conspiracy to impede officers of the United States from discharging their official duties through the use of force, intimidation, or threats, in violation of Title 18, United States Code, Section 372.

We continue to work with Harney County Sheriff Dave Ward and his deputies; Oregon State Police; and the United States Attorney's Office to address any further outstanding issues. As the investigation is ongoing, we cannot comment further at this time.

All defendants should be presumed innocent until proven guilty.

UPDATE (7:30 PM MT): Police will be releasing a statement shortly

Police say a statement will be released soon about developments involving law enforcement action and the refuge occupiers. Details scarce.

Bundy's capture was first reported by one of his supporters, Pete Santilli, on a YouTube broadcast. Three other people were taken into custody.

Santilli also stated that two people were shot during the encounter that led to Bundy's arrest. Oregon Public Broadcasting confirmed that Harney District Hospital in Burns, near the wildlife reserve that Bundy's group seized, is on lockdown and that there was a "shooting incident."