How we find claims and stories to fact check

Lead Stories looks for claims and stories to fact check using several tools and methods, here are the most important ones:

Lead Stories created the Trendolizer™ engine to monitor the internet and look for newly trending content. It can measure the engagement rate (likes, views, comments, retweets etc.) of links, images and videos appearing on various platforms (Facebook, Twitter, YouTube, TikTok...) and gives us an overview of what is currently going viral. 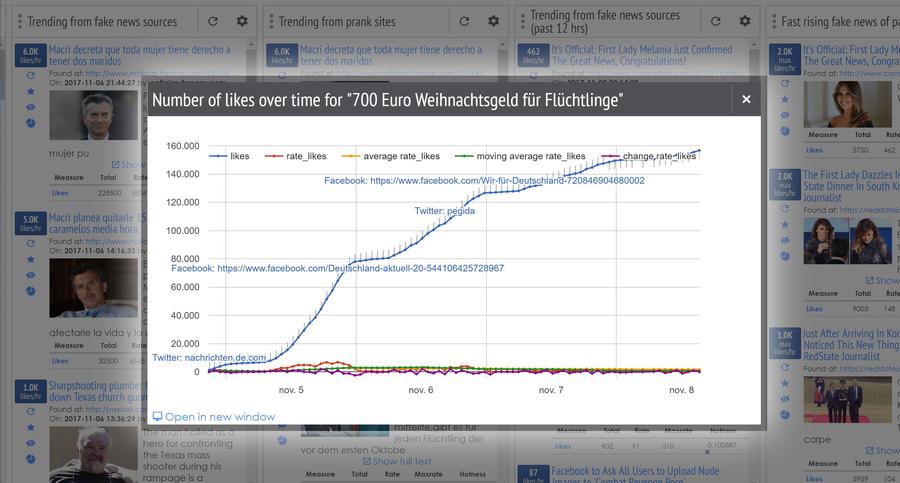 (screenshot from our Trendolizer™ dashboard)

We use Trendolizer to monitor the internet for viral content in general but also look at popular content from specific sites that have posted false information in the past, along with viral content matching keywords and phrases associated with false narratives or conspiracy theories.

We use Google Trends daily to check which search queries related to fact checking phrases ("fake news", "fact check" etc.) are popular on Google. This usually indicates people are searching for answers about a particular story because they have doubts about the veracity.

Lead Stories is part of Facebook's Partnership with Third Party Fact Checkers and as such we get access to lists of content that has been flagged as potential candidates for fact checking (via a custom tool for fact checkers provided by Facebook) . Note that Lead Stories is free to pick items from that list or to ignore them, Facebook does not tell us which stories we should do.

In order to determine the virality of certain links we also use CrowdTangle, a Facebook-owned tool that provides statistics on social engagement on Facebook, Reddit and Twitter.

Readers can always contact us via our contact page if they have a tip about an online story that is potentially false and harmful. In practice we get very few tips like this but we would love to get more.

How we select claims and stories to fact check

On a typical day we will look for the most trending stories/videos/posts/... with these tools and pick the ones that meet following criteria:

Generally we prioritize stories related to current events and new and never before seen claims but we also tackle older claims sometimes, especially if they have a tendency to keep coming back periodically (think old hoax articles that keep getting reposted to new sites by financially motivated spammers or fake quotes attributed to a politician that keep showing up whenever that person is in the news).

We do not take political slant into consideration when choosing what to check. We check claims that harm (or benefit) people, causes and groups all over the political spectrum.

We do sometimes check claims that originated on satire websites or that are satirical in nature but only in cases where it seems significant numbers of people believe it is real. You can see our Satire Policy here.

Reader tips are judged by the same criteria listed above: if we get sent claims that are uncheckable, harmless or not very widespread there is very little chance we will follow up on them. Conversely, a concrete, harmful and viral story will get our attention.

One of the aims of our fact checking is to help stop or slow down the spread of trending false information. This means we rarely publish fact checks to point out something is indeed true: if the truth is going viral by itself we are quite happy to leave it alone.

How we fact check claims and stories

Each claim is different and not all of them require the same approach. Generally we first try to reframe the claim as a question ("Is it true that X?") and then our goal is to provide an answer to that question along with the reason and the available evidence.

There are questions we usually ask and try to answer in order to be able to say if a claim is true or not (although not all of them may apply in all situations):

Our goal is to serve our readers by publishing an article reliably proving or disproving a claim as quickly as possible. This means we tend to publish as soon as we have collected enough information to confidently make the call but we sometimes continue updating the story while we collect even more supporting evidence or when sources get back to us (more experts/sources calling back, FOIA requests being answered...).

In the (fortunately rare) case where our initial assessment was wrong or when newer evidence requires changes to the conclusion we will update the story in accordance with our Corrections Policy.

Note that in some cases it is impossible to prove or disprove a claim, simply because no good evidence is available. In such cases we will point out there is no evidence we could find for or against the claim and that the person or website that made the original claim is doing so without providing any proof. We will also explain how and where we looked for evidence.

All our articles generally follow the same structure to allow for easy scanning and to avoid accidentally spreading false information.

We know many people will only ever see our headlines and thumbnail images on social media and that the vast majority of people who see a social media post will not click through to read the full article. Of those who do, many only read the first paragraph.

So we aim to put as much information in the headline, thumbnail image and first paragraph as we can.

Generally we try to stick as close as possible to the headline of the original article or video or to the text of a meme/tweet/screenshot we are fact checking, but with the addition of the words "Fact Check:" and a capitalized word to negate the meaning (when the original headline or claim is not true).

For example: "This Is An Apple" becomes "Fact Check: This Is NOT An Apple".

Note that we also don't reflexively negate every headline or claim because proving the opposite is sometimes equally impossible or the negated headline has a different meaning than what we intend to say. If the claim is "X Killed Y" and there simply is no evidence either way that X did it or not, it would not be correct to say "X Did NOT Kill Y". In such cases we would say something like "NO Evidence X Killed Y".

And when a headline reads "X Causes Y According to Scientists" and it turns out the scientists did not actually say that, our headline would likely be something like "Scientists Did NOT Say X Causes Y" rather than "X Does NOT Cause Y According To Scientists".

The goal of our headlines is to immediately tell our readers the conclusion of the fact check so that even if they don't read the rest of the article they have not been exposed to false or misleading information. That is also the reason why we don't use question headlines. If someone only sees "Fact Check: Did X Kill Y?" they might still get it stuck in the back of their mind that maybe X really was the murderer of Y or that questions are being asked about it.

Our stories all contain a screenshot of the original post/article/website/tweet/video that made the claim (or at least a representative example of it). This screenshot will have a caption superimposed over it that can contain a maximum of fourteen characters. This captioned image is also the thumbnail image when our stories get shared on social media.

Since the spring of 2020 we ask our writers not to put a summary of the *conclusion* of the fact check in the caption anymore because that information should already be in the headline. So you shouldn't see things like this on recent stories:

Instead we ask our writers to boil down and summarize the reason for the conclusion there in one to three words.

Why is there a problem with the claim? Why is X NOT Y?

Some good examples of what the caption can be include:

Here is an example for a hypothetical post with the headline "Fact Check: This Is NOT An Apple": 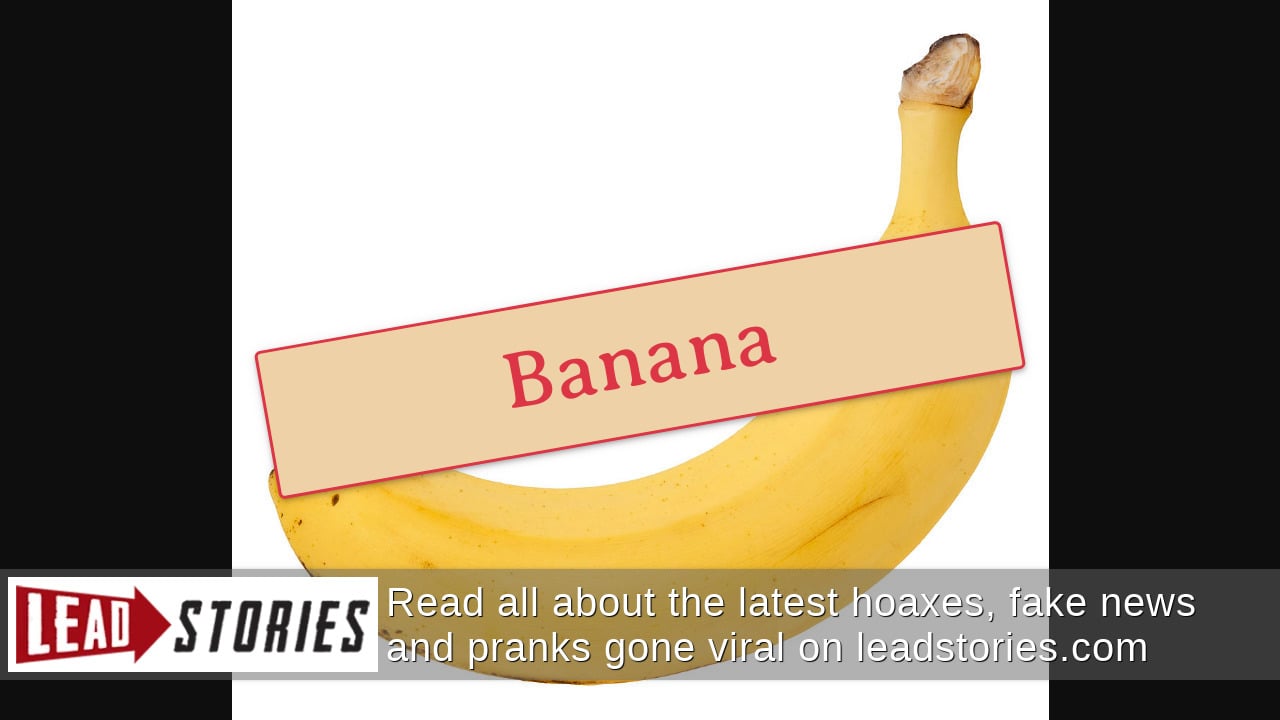 Why is this not an apple? Because it is a banana!

Our articles all have the same basic structure:

There are also some key principles we ask our writers to adhere to:

Lead Stories does not use a standardized rating scale or score to rate claims on our website. When we investigate a false or misleading claim we simply aim to explain what exactly is wrong with it and why. It would only be a source of confusion to also attempt to add a score, rating, number or a standardized description to say precisely how wrong it is. What is the difference between "half wrong", "partly real" or "mixed"? Is a claim that is 72% false really that much worse than one that is 28% true? Are five "TruthPoints" really better than four and what does that one point difference mean?

Most of our readers don't care or don't have the time to worry about distinctions like that.

They just want to know if that story they saw online is true or not. So we do our best to tell them.