Did a nurse save a woman from an abusive boyfriend when the woman secretly passed her a message asking for help? No, that's not true: This scene, designed to look as if it was captured by a security camera, is a staged production using actors. The page that shared the video, "Jalals," is labeled as being from a comedian. The page has many such "caught on camera" videos. Another scenario, posted with no disclaimer that it is staged, features this same basic plotline and the same actors wearing the same clothes, only they are in a restaurant rather than a doctor's office when the woman passes a message to the waitress asking for help.

The video appears in a post (archived here) published by Jalals on April 20, 2021, under the title "NURSE SAVES GIRLS LIFE..". It opened:

Always look out for each other 😱🙌
NURSE SAVES GIRLS LIFE..

Another video published by the Facebook page Jalals, titled, "WAITRESS SAVED HER LIFE 😱🙏"shows a similar story purportedly caught on the security camera of a restaurant. In both skits, the boyfriend reacts with jealousy when the woman glances at a man wearing a brown sweatshirt who walks past. Below are screenshots from both videos showing the actors in both scenarios. 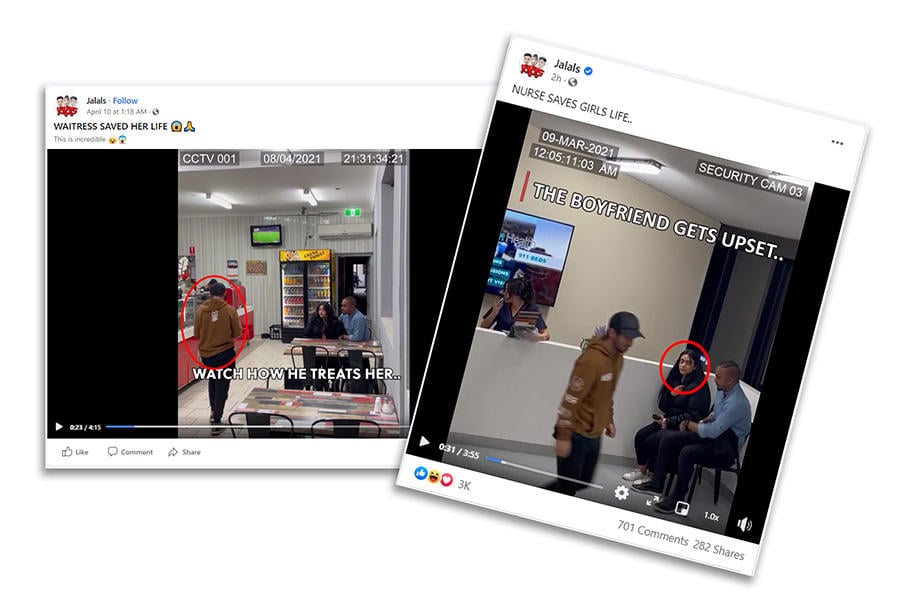 A situation similar to what is represented in these videos did really happen in Florida. The Volusia Sheriff's Office reported that On May 25, 2018, a woman was able to escape from her boyfriend who was threatening her at gunpoint, by convincing him to let her take their dog to the vet and then slipping a note to a veterinary staff member who alerted police. That scene was captured on the security cameras at the vet's office.