Did President Joe Biden and Vice President Kamala Harris visit Area 51 -- a U.S. Air Force facility that has spawned numerous conspiracy theories -- on January 8, 2022, by plane? No, that's not true: Biden and Harris flew to Nevada to attend the memorial service of the late U.S. Sen. Harry Reid of Nevada.

The claim appeared in an article (archived here) published on the Hal Turner Radio Show website on January 8, 2022. The article discussed the alleged start of a so-called "World War 3" between numerous countries. One section of the article, updated the evening it was published, read:

Things just took the single most dramatic turn for the worse imaginable. Both the President, and the Vice-President of the United States were quietly flown to AREA 51 in Nevada, about 80 miles north-northwest of Las Vegas, for a personal briefing and demonstration of the United States most advanced, and most secret, "deployable" military weaponry.

Satellites Would Be Attacked First, Then These Radar Stations if WW3 Commences next week

The situation between the US/NATO and Russia has become critical. If you hear news that any of these radar stations has had

While the ADS-B Exchange screenshots used in the article do show that Biden's and Harris' separate aircraft were in Nevada on January 8, 2022, the screenshots do not show the exact location where those aircraft landed in Nevada. After searching for the same aircraft in ADS-B Exchange, Lead Stories found that both Air Force One and Air Force Two were in Las Vegas, as shown respectively in the detailed screenshots included below: 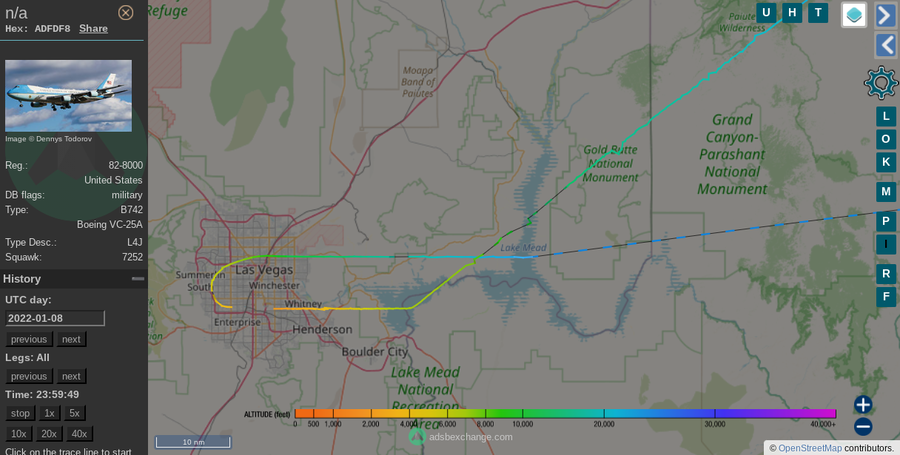 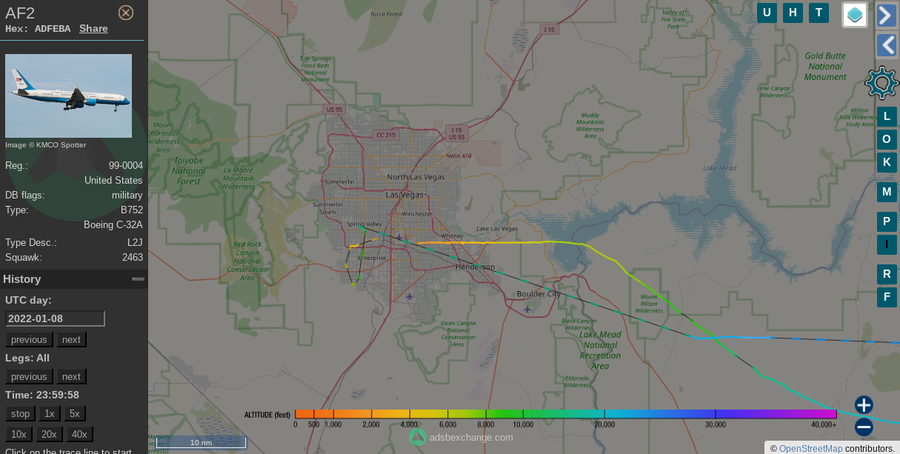 Both Biden and Harris were in Las Vegas for Reid's memorial service. Footage of Biden landing in Las Vegas on the evening of January 7, 2021, ahead of the memorial the next day can be found here. A database that tracks Biden's public schedule also showed that he was at the memorial on January 8, 2022:

The article correctly mentions that Area 51 is about 80 miles away from Las Vegas. The data from ADS-B Exchange do not show Biden or Harris traveling outside the Las Vegas area via aircraft.

Other Lead Stories fact checks related to Area 51 can be found here.