My name is Jackson Mulholland & I'm one of many ppl here working at @Twitter in charge of developing terms & conditions for users. We're not stripping away 'free speech', we're protecting users from bullies, bigots, & spam. I refuse to work with or for @elonmusk. I'm resigning. 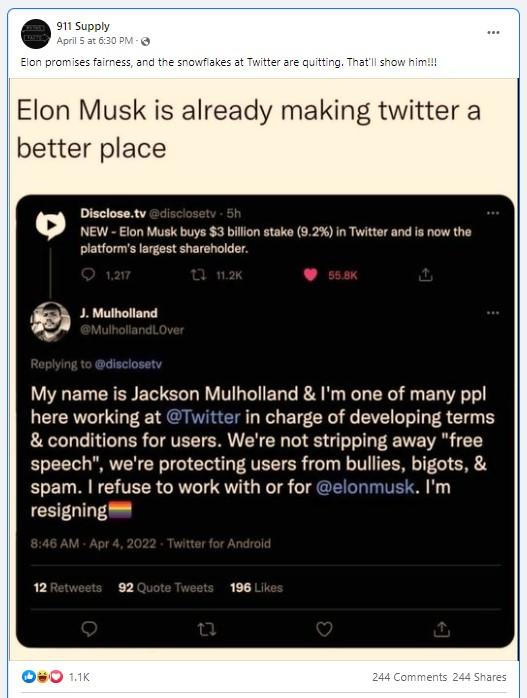 On April 4, 2022, it was reported that Elon Musk, the world's richest person, had purchased a 9.2% stake in Twitter. In late March, he posted criticism of Twitter for "failing to adhere to free speech principles."

The image above, including the caption, "Elon Musk is already making twitter a better place," is from the tweet of Zero HP Lovecraft @0x49fa98. This account posted a screenshot of the original @MulhollandL0ver reply rather than simply retweeting it. Using a screenshot in this manner separates the tweet from the context of the clearly marked satire account of J. Mulholland. This screenshot copy has been retweeted over 23,000 times from the @0x49fa98 account, while the original reply was retweeted less than 3,000 times.

Mulholland's regular followers would have recognized a device that he sometimes uses in constructing tweets about current events: Posing as an employee or professional close to the event, he shares a fictional insider's perspective. Additional examples of this can be seen in a tweet by Verification Handbook author @CraigSilverman who reminded @RubinReport, "Always read the bio!" Mulholland's bio reads: 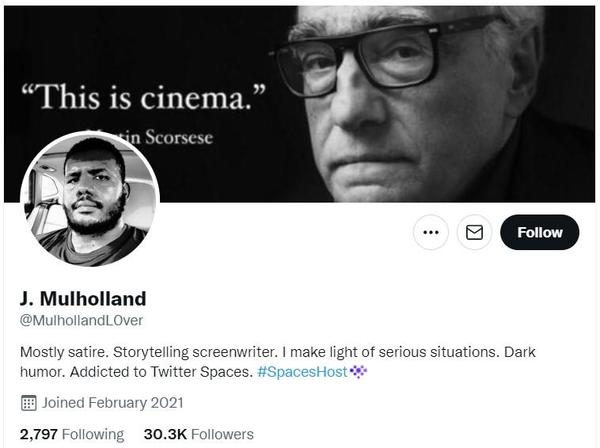 Many of the people quote tweeting Mulholland's original reply did not seem to be aware that the tweet was satire. Several high-profile accounts including Dinesh D'Souza, Rand Paul and Sebastian Gorka quote tweeted the original or posted a screenshot.