Fake news website Viralmugshot.com recently posted an article titled "Angry Woman Cuts Off Man's Penis for Not Making Eye Contact During Sex" which prominently features a mugshot of a cross-eyed woman. The story is not true and is basically a repeat of an old hoax. The article starts off:

A woman in Scottsdale, Arizona, has been arrested after she cut off her partner's penis in a fit of fury. Shania Jones, 34, told detectives that she was sick of the man - who has been named locally as Bruce Fox - refusing to make eye contact with her during sex. Fox is currently in intensive care at Scottsdale Liberty Hospital, where he is expected to make a recovery.

The attack took place in Fox's home last Thursday. According to the man, the pair were having sex, when all of a sudden, Jones got up, grabbed a kitchen knife, and sliced the tip of his penis off. Jones fled the scene as the man lay on the bed, bleeding profusely. Emergency services were called to the scene, and luckily for Fox they were able to stem the flow of blood before he lost consciousness.

Viralmugshot seems to be part of a network of fake news websites that also includes The Celebtricity and TMZhiphop, which is one reason not to believe the article. Another reason is that the mugshot used is a photoshop of a real mugshot of a woman named Launa Whitney Sharpton who was arrested in 2013 for theft and drug paraphernalia possession. 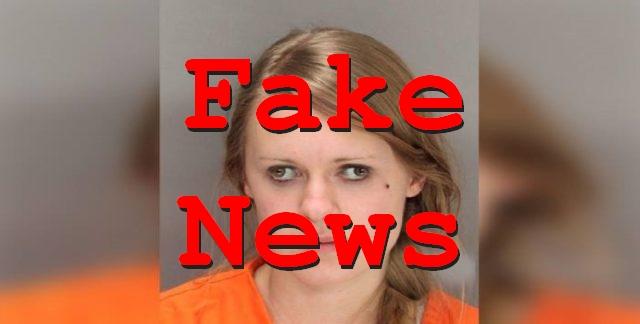 The story has been repeated on dozens of fake news websites over time, often with slight changes in details. In some versions she is 'Crazed' while in others she is described as 'Angry'. Check for yourself on Google.

Lead Stories wasn't the only fact checker suspicious about this story: it was fact checked and found false by Snopes too:

A fake news article reported that a cross-eyed woman cut off her partner's penis after he refused to look her in the eye during sex.