Florida Governor Rick Scott was taken by Lifeflight to Mercy General In Sarasota this morning after taking part in a cleanup effort in his home town that went terribly wrong. Scott's Chief of Staff, Morton Valdy, told Fox News:

"Governor Scott was struck in the head with a ceramic roof tile this morning while helping a neighbor in his home town clear debris from his driveway. The tile fell from the neighbor's roof and fwell nearly 30 feet before striking the Governor, knocking him unconscious.

After Lifeflight got to him and stabilized him he was moved to Mercy where his condition has been downgraded to critical. The next few hours in the ICU will be critical. Doctors will drill a small hole in his skull to relieve the pressure or internal bleeding.

Our thoughts and prayers are with him and his family."

The article is actually the first in a series of two articles posted so far to various websites all owned or operated by Christopher Blair (aka Busta Troll), a notorious satirist and fake news writer whose work often gets copied by "real" fake news sites without attribution or satire disclaimer. 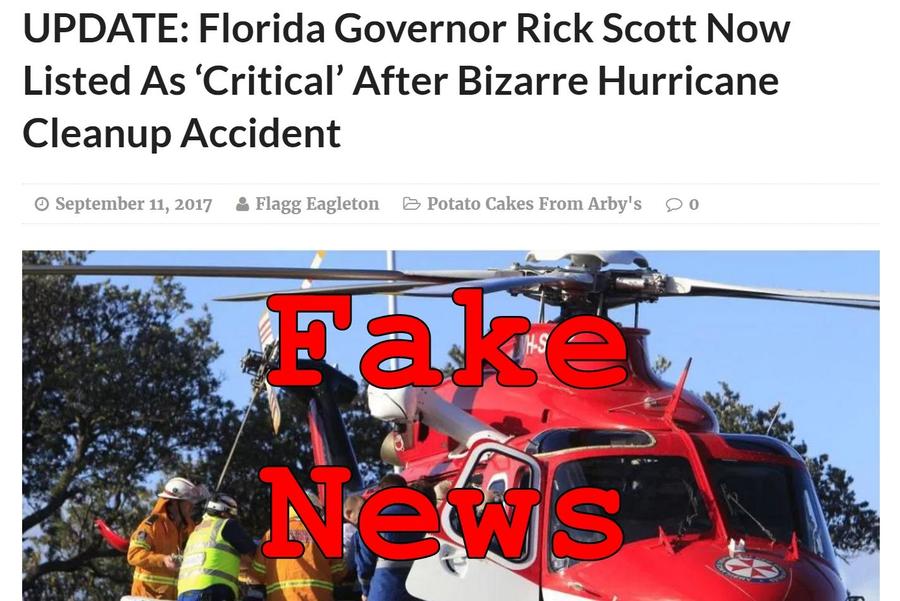 Of course the entire article is made up, since The Resistance: The Last Line of Defense is a well known hoax website with a disclaimer that reads:

The article got an unusually large number of likes and shares compared to Blair's most recent fake news articles. But that doesn't mean you should fall for this one.