Are hackers posting sexual videos and pictures on people's Facebook walls without them noticing? No, that's not true: an old hoax rumor from 2011 keeps on circulating but it is not real.

An image bearing following text is still making the rounds in 2019:

Hackers are posing sexual videos and pictures on your walls! You don't see them, but your friends do, then it seems as if you posted it. If you see any such garbage posted under my name, please let me knw because

Here is an example of the image being circulated: 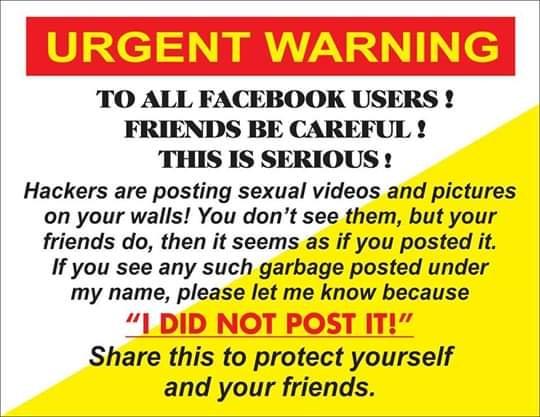 The story seems to be a variation on a hoax that has been making the rounds on Facebook since at least 2011 according to Snopes:

In September 2011, warnings about hackers invading the accounts of Facebook users to post pornographic movies on their walls without their knowledge began circulating in e-mail and on social networking sites.

Several other variations of the post exist, as reported in 2017 by Hoax Slayer:

'Hacker' alert messages circulating on Facebook claim that, without your knowledge, hackers are posting insulting or sexual messages that appear to come from you onto your Facebook Timeline. The messages are simply too vague to have any real merit as security warnings.

The text on the image seems to be mostly a copy of the contents of this post on a Nigerian forum from 2013 (archived here):

Friends be Careful...This is Serious...

Hackers are posting sexual videos and pictures on your walls!

You don't see them, but your friends do, then it seems as if you posted it.

If you see any such garbage posted under my name, please let me know
because I didn't post it!

There are no current reports of hackers posting such images or videos to people's timelines on a large scale and even if there were sharing the message would not offer any protection.