Did actor Ken Kercheval, best known for his role as Cliff Barnes on the "Dallas" TV series, die? Yes, this is true: Kercheval died on Sunday, April 21, 2019 in his hometown of Clinton, Indiana, after a fight with lung cancer, according to a spokeswoman at Frist Funeral Home in Clinton. His talent agency also confirmed his death to Lead Stories. This confirms a report published by the local newspaper The Daily Clintonian on Monday, April 22, 2019.

Kerheval will be wrapped in a blanket and placed in a pine box to be buried next to a niece who passed away years ago, according to a friend. The burial will be in a small cemetery in his native Vermillion County, Indiana, the friend said.
News of Kercheval's death has been confused by false reports that the local newspaper story -- which is not online -- was false. A Dallas fan group Twitter posting and a FaceBook page said its source was Kercheval's son, Caleb, and it referenced a post on Kercheval's personal FaceBook page saying "That J.R.'s at it again. He's hacked the Daily Clintonian." The fan post read:

"No one can accuse Ken Kercheval of not having a sense of humor. The man himself has just posted this on his own personal Facebook Page. #Dallas"

"No one can accuse Ken Kercheval of not having a sense of humor. The man himself has just posted this on his own personal Facebook Page. #Dallas"

The publisher of the Daily Clintonian told Lead Stories that what was hacked was Kercheval's FaceBook account, not his newspaper. George "Sonny" Carey said he has asked the Clinton Police to investigate who made that false post.

Kercheval was hospitalized during the week before his death in Clinton for treatment of pneumonia, Carey said. He had also been hospitalized in Terre Haute previously, he said.

The Frist Funeral home said Kercheval's funeral arrangements are not final, but the service is expected to be private.

This is the printed version of the Daily Clintonian article headlined "Clinton resident, actor Ken Kercheval has died" from April 21, 2019: 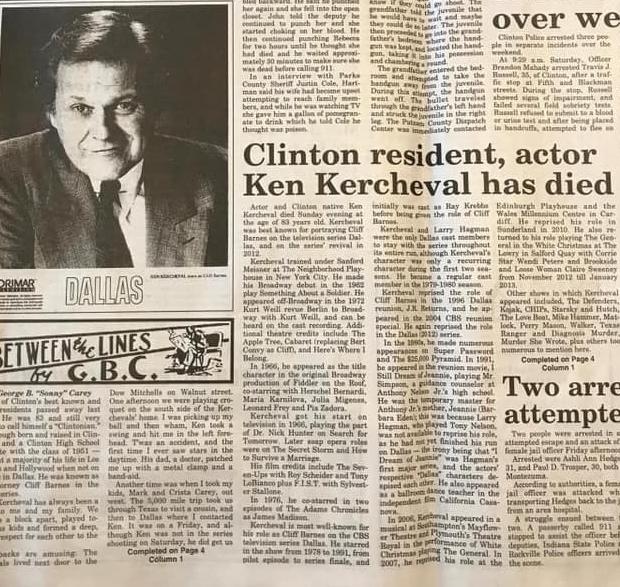 Confirming Kercheval's death was complicated since he has not worked for several years as an actor in Los Angeles because of poor health and a lack of acting roles, according to a talent agent and a former business manager. When Lead Stories knocked on his Granada Hills apartment door to see if the actor was alive, there was no answer. The apartment manager told us he moved sometime in 2016. We later confirmed he had moved to his hometown of Clinton, Indiana.

Carey, the publisher of the local paper, told Lead Stories that Kercheval's son, Caleb, was apparently trying to delay release of the death notice by posting on social media that the paper had been "hacked" by J.R., a reference to the Larry Hagman character on the Dallas show.

Disbelief continued even hours after Lead Stories published confirmation from several named sources of Kercheval's death. Dallas co-star Sheree Wilson tweeted that she had been assured by the son that Kercheval was "very much alive."

Ken IS VERY MUCH ALIVE! This is fake new at it's most disturbing! We have talked to his son and he is just fine and thanks everyone for their well wishes.

Ken IS VERY MUCH ALIVE! This is fake new at it's most disturbing! We have talked to his son and he is just fine and thanks everyone for their well wishes.

In addition to the local funeral home, the local newspaper publisher, and a talent representative confirming to Lead Stories that Ken Kercheval has died, a Clinton resident who said she has known him since childhood told us "I'll bet you a zillion dollars he's no longer with us."

A virtual Twitter war erupted between disblieving fans and Clinton residents over the death news.

Dude, sorry to break it to you, but Ken passed.
We hicks in "the sticks" knew Kenny, & his health, etc. His granddaughter broke the news to her class Monday.

Those who don't beiieve the longtime friend could pick up the phone and call the funeral home, as we did at Lead Stories.

I will testify to anyone that it is a fact and not a hoax, Ken Kercheval died on Sunday, April 21, 2019 at his residence. Anyone who does not believe me can contact the Funeral Director of Frist Funeral Home in Clinton, Indiana at the following phone number:765-832-3511.

If a living Ken Kercheval surfaces, it raises serious questions about whose body is at the Frist Funeral Home in Clinton, Indiana.