Did Japan abandon the development of 5G wireless networks for the health of its citizens? No, that's not true: a now deleted article from a Russian website falsely made that claim in June 2019 but a copy of the story on the Internet Archive has recently gone viral again.

The story can be read on the Internet Archive here (archived a second time here) where it was published by Top News Russia On June 9, 2019 under the title "Japan abandoned the development of 5G networks for the health of citizens". It read:

Japan will not develop and invest in the creation of fifth-generation mobile networks. This is stated on the official website of the Ministry of High Technologies of the country. Officials expressed the opinion that the creation of a faster Internet than previously is dangerous for the population and may adversely affect people's health and labor productivity. Japan A study by the University of Nagasaki provides figures confirming the increase in the number of mental disorders and fatigue among high-speed Internet users. According to scientists, the more a person manages to conduct intellectual operations per minute, the more he is prone to the development of stress, absent-mindedness and an increase in nervous excitement. The Ministry of Health supplements colleagues and assures that using 5G networks can reduce the average life expectancy in the country for the first time in 60 years, and the impact of high-speed Internet is comparable to the effects of radiation on the human body. "We need to think about the health of the Japanese. Our country has already accelerated economically so that today we have nowhere to hurry. It is necessary to stabilize this state. 5G is fraught with great danger. So we think not only we, yesterday this information was confirmed by the US ambassador to Japan. If America, China or the EU countries are ready to risk their people for the sake of progress, then such a strategy is unacceptable for our welfare state, "said Nobunari Kabato, Minister of High Technologies. The bill to ban fifth-generation mobile networks in the country has already been submitted to the Japanese parliament. 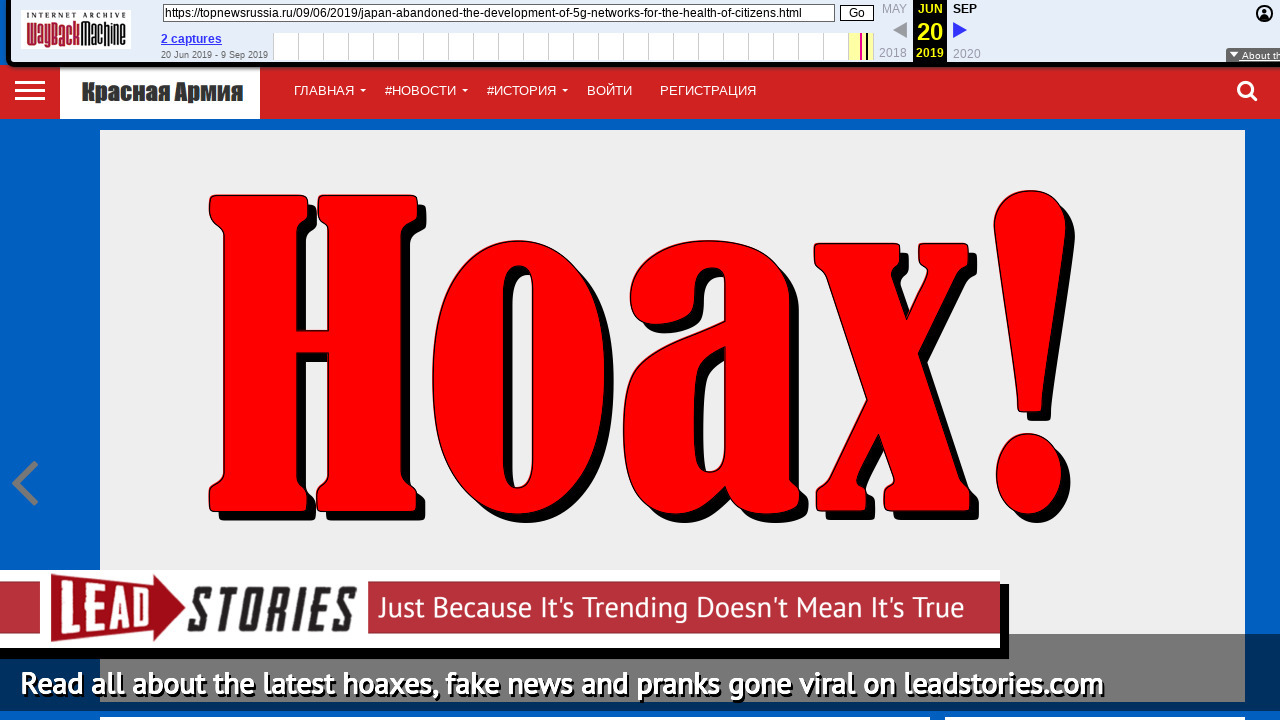 The whole story is a hoax: Japan does not have a "Ministry of High Technologies" and we were unable to find a trace of a Japanese minister named "Nobunari Kabato". You can check for yourself in the official directory of Japanese ministries at the website of the Japanese government:

This page contains links to websites for the Cabinet, Ministries and Agencies, the Diet, the Supreme Court and other government agencies.

Similarly you can verify the lists of ministers and the list of state ministers on the same website.

Judging by the coverage of the Japan Times the rollout of 5G networks in Japan is definitely happening:

Mobile phone carrier NTT Docomo Inc. said Wednesday that it would begin on Friday a trial service allowing people in Tokyo and other major cities, including Nagoya and Osaka, to experience using fifth-generation, or 5G, communications networks, ahead of its full commercial 5G rollout next spring.

Don't get your telecommunications news about Japan from poorly sourced deleted articles originating on Russian websites...