Did former President Obama respond to the Inspector General Watchdog report saying Attorney General William Barr is Trump's lap dog? No, that's not true: the self-proclaimed satirical article says Obama is being investigated, which he is not. The former president has not come out with recent comment on the report.

The story was published by a liberal satire website that tries to mislead Trump supporters and Republicans into sharing made up stories that are clearly marked as satire when you actually click them. Articles from the site are frequently copied by foreign-run fake news websites. The people liking and sharing these stories are enriching foreign website operators or a liberal from Maine via the ad revenue generated with the content which is probably not what they expected or wanted.

The story originated from an article published by Obamawatcher on December 12, 2019, titled "Obama Responds To Report:'Barr Is Trump's Lap Dog. He Lies For Him'" (archived here) which opened:

Faced with mountains of supposition from AG Barr with regard to the findings of the IG Watchdog report into the lead-up to the Russian collusion probe, former President Barack Obama is lashing out, as the guilty tend to do when the walls start closing in on them. Asked about the conclusions drawn by the investigation, Obama responded with some very strong words:

"Haha. You want me to give any credence to the report that Trump demanded to take attention from him. That thing is a joke. I won't even read it. It's not worth my time.

Think about who actually initiated it. Attorney-General Gay Barr. That man was hired by Trump specifically to perform hatchet jobs against Trump's political enemies. That's it. That's the only reason he holds that position. He's Trump's lapdog, a devoted servant. There isn't a word in that report that can be trusted and taken as fact." 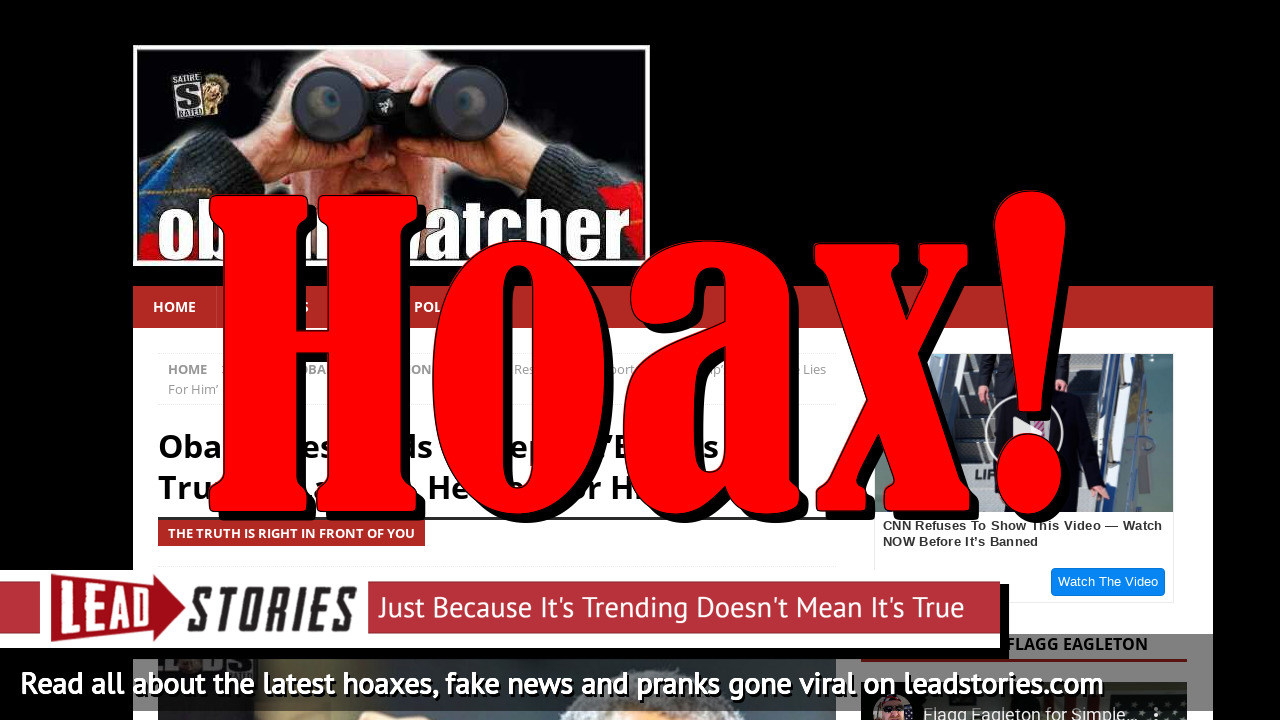 Obama Responds To Report:'Barr Is Trump's Lapdog. He Lies For Him'

Faced with mountains of supposition from AG Barr with regard to the findings of the IG Watchdog report into the lead-up to the Russian collusion probe, former President Barack Obama is lashing out,...

Barr was nominated by President Trump last year. The IG watchdog report, developed by Inspector General Michael Horowitz, found the Russia probe was justified. Horowitz was nominated and confirmed in 2012 under the Obama administration.

The report, numbering over 400 pages, debunked claims made by Trump to undermine the Russian Investigation. Additionally, Barr said he doesn't believe Obama officials committed treason while conducting the Russia investigation. The IG watchdog report had more to do with whether the FBI had sufficient grounds to open an investigation of the Trump campaign and possible ties to Russian interference.

As for Obama calling Barr "Trump's lap dog," there is no evidence such a statement was said. However, the defense attorney in the Stormy Daniels' case, Dean Steward, did reportedly call Barr a lap dog for Trump. The term has also been used in some opinion editorials in response to Trump's relationship with the attorney general.