Did Jeffrey Epstein have plastic surgery and is alive and well in Cuba? No, that's not true: The story was fabricated by a Canadian entertainment website that publishes fictional stories about bizarre crimes, weird sexual acts, and other made-up events. Despite a flurry of conspiracy theories, there is no evidence to suggest that Epstein is alive. New York City's medical examiner ruled Epstein's death a suicide on August 16, 2019.

The claim originated from an article published by World News Daily Report on December 30, 2019, titled "Jeffrey Epstein had plastic surgery and is alive and well in Cuba believes British journalist" (archived here). It opened:

Months after Jeffrey Epstein was found dead in a Manhattan jail cell, a British journalist now claims he has tracked down the sex offender who is now allegedly living in Cuba under a new identity.

Brook McAnnister, a British freelance journalist who made headlines earlier this year for revealing that Bill Clinton had been on Epstein's private jet an impressive 27 times, now claims Epstein is alive and well on the island of Cuba. 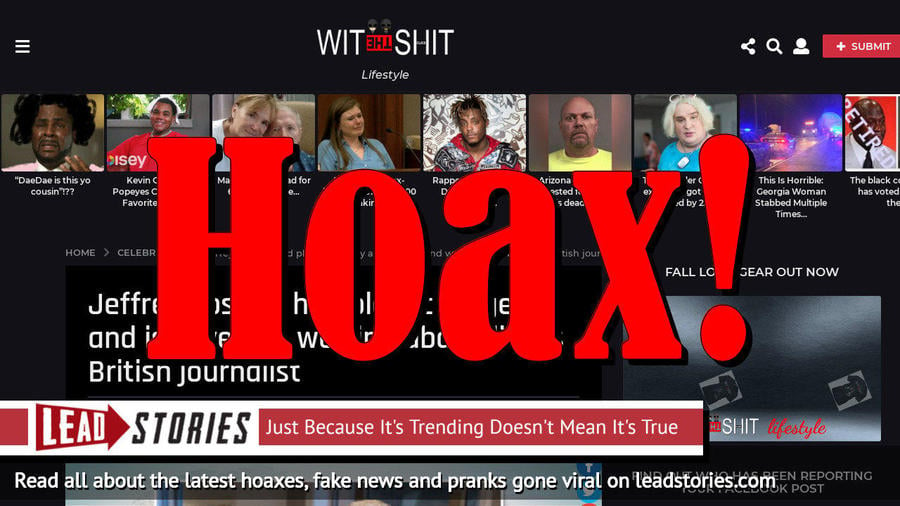 Months after Jeffrey Epstein was found dead in a Manhattan jail cell, a British journalist now claims he has tracked down the sex offender who is now allegedly living in Cuba under a new identity. Brook McAnnister, a British freelance journalist who made headlines earlier this year for revealing th

The original post has since been deleted, but it has been copied word-for-word by a few other websites (here and here). The new posts remove any references to the article being a work of satire.

The story attributed the claim to a British freelance journalist, Brook McAnnister. That name appears to be made up.

Epstein was found dead on August 10, 2019, at the Metropolitan Correctional Center in New York City. Inconsistencies about the manner in which the disgraced financier, who was indicted on sex-trafficking charges, have fueled speculation that he was murdered or, in this case, escaped.

On January 5, 2019, 60 Minutes reported that it had obtained new photographs from Epstein's jail cell and of his autopsy. CBS News noted the photos raise new questions:

The photographs shed new light on the circumstances of the disgraced financier's apparent suicide, which has fueled online conspiracy theories. But multiple forensic pathologists 60 Minutes spoke to came to a consensus that without one image--the position of how Epstein's body was found in his cell--it is difficult to determine the cause of death with certainty.

Even so, CBS News added that there is no dispute over whether Epstein is dead. It said fingerprints of the body found in the cell match those taken after he was booked during an arrest in Florida in 2006.

The website World News Daily Report is a humor website specializing in posting hoaxes and made up stories. The disclaimer on their website is pretty clear about that, even though you have to scroll all the way down the page to find it:

On March 20, 2019, the site added a new header that included the slogan "Where facts don't matter" to make it clear to casual visitors the published content is fictional:

The site often uses images stolen without attribution from real news websites, and they sometimes show real people who have nothing to do with the story. For example, here:

It is run by Janick Murray-Hall and Olivier Legault, who also run the satirical Journal de Mourréal, a satirical site spoofing the (real) Journal de Montéal. Very often their stories feature an image showing a random photo found in a mugshot gallery on the Internet or on a stock photo website superimposed over a background of flashing police lights or crime scene tape.

NewsGuard, a company that uses trained journalists to rank the reliability of websites, describes worldnewsdailyreport.com as: