Did House Speaker Nancy Pelosi say President Trump must apologize to Iran "Or Else"? No, that's not true. The satirical story was published by a liberal website that tries to mislead Trump supporters and Republicans into sharing made-up stories that are clearly marked as satire when you actually click them.

Articles from the site are frequently copied by foreign-run fake news websites and this one was no exception: it was stolen by at least five different sites within hours of publication. The people liking and sharing these stories are enriching foreign website operators or a liberal from Maine via the ad revenue generated with the content, which is probably not what they expected or wanted.

The claim originated from an article published by Taters Gonna Tate on January 4, 2020, titled "Nancy Pelosi Says Trump Must Apologize To Iran 'Or Else'" (archived here) which opened:

Nancy Pelosi has really outdone herself this time. In what can only be described as a drunken rant, the commie Speaker of the House demanded that President Trump apologize to the Iranians for killing one of their generals "or else." What does she mean by "or else?" from the rest of the rant, we couldn't really tell:

"I have a great relationship with the Iranians. Probably better than anyone. I know them and have dealt with them on many, many occassions. There's probably nobody better, more qualified to talk to them and you know, we're going to go and see what we can do to be the United States of American and talk to them because we're looking at those things and we're also looking at other things." 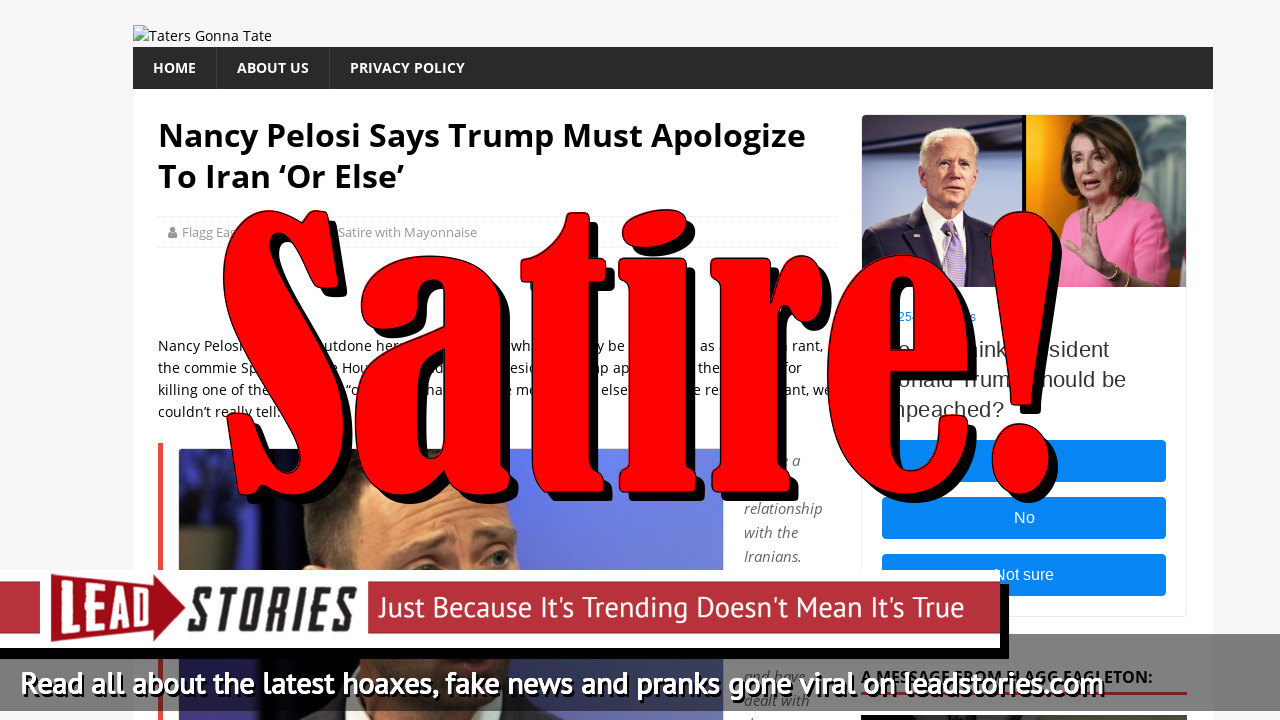 Nancy Pelosi Says Trump Must Apologize To Iran 'Or Else'

Who the heck does she think she is?

The original story was published in a category named "Pelosi Satire with Mayonnaise" and nobody with a half a brain would expect a website named "Taters Gonna Tate" to be a serious news outlet.

Articles from Blair's sites frequently get copied by "real" fake news sites who often omit the satire disclaimer and any other hints the stories are fake. Blair has tried to get these sites shut down in the past, but new ones keep cropping up. In this case, the story was stolen by newsservis.com, conservativenation.online, conservativeleague.club, massachusettsdaily.com and d20news.com, all relatively new websites registered anonymously.