Did Pope Francis bow down to the "Order of the Illuminati" and kiss their hands and feet? No, that's not true: The Pope kissed the feet of once-warring Sudanese leaders in the hopes of urging them not to return to a civil war. The video being shared contained false captions and ascribed the actions to a "secret world government" conspiracy theory that has long been proven false.

The story originated from a video published by FromDeath2Life 6 on January 4, 2020, titled "POPE BOWS DOWN TO THE ORDER OF THE ILLUMINATI - KISS FEETS AND HANDS" (archived here). 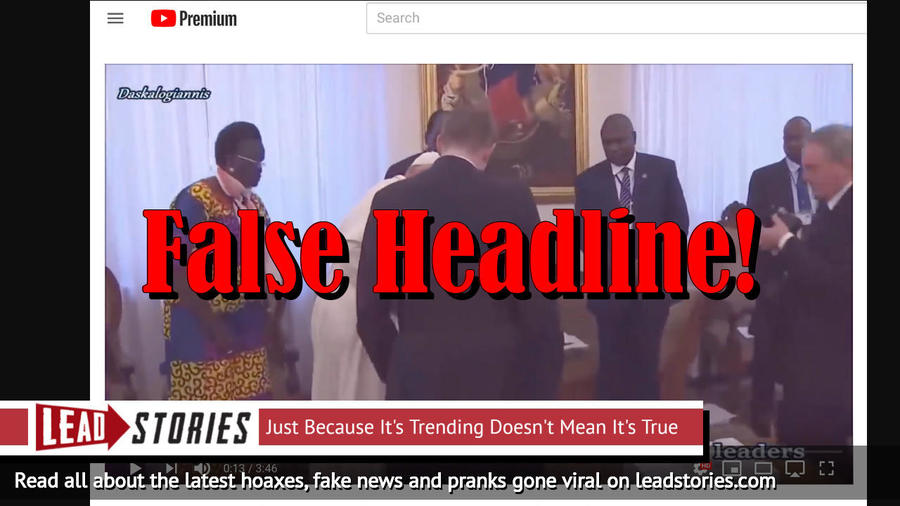 The video stitched together various clips of Pope Francis over the years kissing feet or hands of multiple individuals. Off the top, a caption reads: "Pope Francis kisses feet of Sudan's muslim leaders."

On April 11, 2019, the Pope made this dramatic gesture after a two-day spiritual retreat with South Sudan's previously warring rivals. The Vatican said it brought the leaders together to help keep the peace. According to Reuters, Pope Francis said:

I am asking you as a brother to stay in peace. I am asking you with my heart, let us go forward. There will be many problems but they will not overcome us. Resolve your problems."

This is not true. The video was taken from the Pope's May 26, 2014, visit to Yad Vashem, Israel's official memorial to the victims of the Holocaust, in Jerusalem. The pontiff was meeting with Holocaust survivors, as Euronews reported at the time, not members of the Rothschild or Rockefeller families.

The Yad Vashem website features similar images from the event, including captions of the names of the six Holocaust survivors. No one named Rothschild or Rockefeller was greeted by the Pope.

The video is likely trying to suggest that the pontiff is an unholy man or subservient to a secret world order, the "Order of the Illuminati."

As the BBC noted in 2017, the Illuminati conspiracy theory was created by a couple of authors, Robert Anton Wilson and Kerry Thornley, who wanted to force people to question their own realities. The BBC quoted author David Bramwell, who has "dedicated himself to documenting the origins of the myth":

According to Bramwell, Wilson and one of the authors of the Principia Discordia, Kerry Thornley, "decided that the world was becoming too authoritarian, too tight, too closed, too controlled". They wanted to bring chaos back into society to shake things up, and "the way to do that was to spread disinformation. To disseminate misinformation through all portals - through counter culture, through the mainstream media, through whatever means. And they decided they would do that initially by telling stories about the Illuminati."

The video concludes with a hand-drawn map illustrating a web of conspiracies that reads like the makings of a Dan Brown thriller. It claims the "House of Rockefeller, " a wealthy American family, and the "House of Rothschild," a prominent Jewish family from Europe, feed into this global network secretly running the world. That conspiracy theory has been circulating for years - dating at least to the 1960s - but has long since been debunked.