Was a young Pete Buttigieg arrested for dog slayings in 1998? No, that's not true: That is a rumor being circulated over the Internet after someone created a fake newspaper account about the alleged incident involving the former mayor of South Bend, Indiana, and current Democratic presidential hopeful.

The rumor began on Sunday, February 9, 2020, after tweets like this one began popping up (archived here). The tweet alleged:

Buttigieg arrested Aug 30 1998 in South Bend Indiana for strangling 5 dogs! If he does that to a dog what will he do to humans as President? 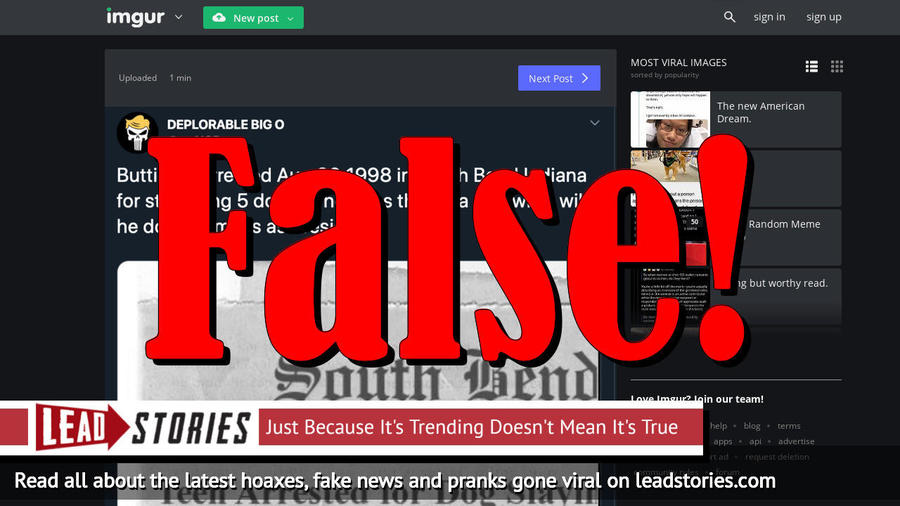 Buttigieg arrested Aug 30 1998 in South Bend Indiana for strangling 5 dogs! If he does that to a dog what will he do to humans as President? pic.twitter.com/C70CEIn3Ed

The fake newspaper clip was generated by The Newspaper Clipping Generator, where anyone can create what appears to be a legitimate article.

Even as the fake news was being shot down, others tried to keep the false report alive.

Buttigieg, meanwhile, stuck to the issues on Monday ahead of the key New Hampshire primary. The Democratic presidential hopeful shocked the political world with a razor-thin margin of victory over U.S. Sen. Bernie Sanders in the disputed Iowa caucuses. The campaign is hoping for a strong finish in New Hampshire and seize further political momentum.

Americans shouldn't have to spend their life savings to care for themselves or their loved ones. Barb and Vicky, thank you for sharing your families' stories and advocating for all Americans to be able to age and retire with dignity: https://t.co/aSxsnuJC9F pic.twitter.com/f6P9v8An4X