Did U.S. military tanks roll into American towns in advance of martial Law? No, that's not true: A video showing U.S. military tanks on a train do not mean troops are moving into towns across the United States to impose martial law amid the coronavirus outbreak.

The latest such claim appeared as a post (archived here) on Facebook by Letty Gomez Franklin on March 25, 2020, under the title "This Is Real". It opened:

This is real. This morning 03/25/20 in Moorpark Ca. This long long train full of Military tanks and equipment headed south (who knows where and why) I lived in Moorpark many years by the tracks and never ever saw something like this . You make your own conclusions.

The video does show U.S. military tanks being moved on a train, but it does not show the military moving into American towns to impose martial law as the COVID-19 infection rates and related disease deaths rise dramatically across the country.

Let's break this down, starting with the location of the video - Moorpark, California. Moorpark is a city in Southern California that is only 20 miles from the Naval Base Ventura County, so it's likely the tanks were being moved to or from there.

Even so, the post raked up 4,100 views, with one commenter noting the train's route:

NBVC continues to support the Department of Defense in routine air and port operations to support our nation's warfighters. Any logistical movements at Port Hueneme and Naval Air Station Point Mugu are just routine in nature to keep America's deployed forces ready. pic.twitter.com/13yVIOosNC

Rumors of martial law being enacted in the United States since the coronavirus outbreak have increased. Martial law would be the U.S. military imposing direct control over civilian life in the case of a temporary emergency.

This is not happening in the United States.

California is home to several military bases and the movement of tanks is routine for them. There is extensive tank-training acreage across the state, and former members of the military pointed out that tanks are often stored in the desert to prevent them from rusting in the elements.

Los Angeles Mayor Eric Garcetti said in a news conference on March 25 that there were no National Guard troops in Los Angeles.

We are strengthening our response to the COVID-19 emergency every day: taking new steps to relax parking enforcement, and ensuring Angelenos can get unemployment assistance and other support during this crisis. https://t.co/REbWd1uk5z pic.twitter.com/yBrkeiCRV1

"They have armories, they travel through Los Angeles, but officially have not been mobilized," he said. Moreover, officials noted that the National Guard was working on humanitarian projects, including at food banks in Sacramento, Riverside, Santa Cruz, Santa Clara, Amador and Monterey, California.

Melinda Larson, a public affairs officer with the Naval Base Ventura County, gave Lead Stories this statement on March 26, 2020:

Lead Stories has published stories that debunked claims that videos of the tanks on trains were a sign that the United States is preparing for martial law.

Here, a video that showed military trucks, not tanks, on a train, causing some alarm that the nation was readying to impose martial law.

In another piece, Lead Stories noted an amateur video was at least seven years old and did not show the beginning of martial law being enacted in Philadelphia. In that story, a video of military troops walking on a sidewalk claiming to be in Philadelphia went viral, with people claiming officials there were about to invoke martial law and round up citizens to be "hauled off the FEMA camps."

Pennsylvania Gov. Tom Wolf has issued a disaster declaration in the state, but the troops were not there detaining American citizens. No troops had been activated in Philadelphia as of March 14, 2020, the spokesman said. In fact, Lead Stories asked the Pennsylvania National Guard to examine this viral video claim. Lt. Col. Keith Hickox, the state public affairs officer, replied:

The quality of the video makes it very difficult to tell exactly who these Soldiers may belong to but the uniforms contain the outdated ASU pattern which makes me think this is not a recent video of any Army unit.

Additionally, this appears to be a classic "road march" which is done with heavy packs as a form of exercise. As that, it could be a local Guard, reserve or ROTC unit. This form of movement is rarely practiced in any sort of real mission, especially domestically.

Last but certainly not least, I can confirm that there have been no PA National Guard Soldiers activated in Philadelphia this past week in response to the virus or any other domestic response.

In conclusion, even if the video is a recent video, the information written in this post is completely fabricated.

President Donald Trump on March 13, 2020, declared a national emergency over COVID-19, the scientific name for the new coronavirus. Many places in the United States have been quarantined, or have ordered schools, restaurants and bars closed. But no national lockdown has so far been imposed. And no martial law has not been declared. 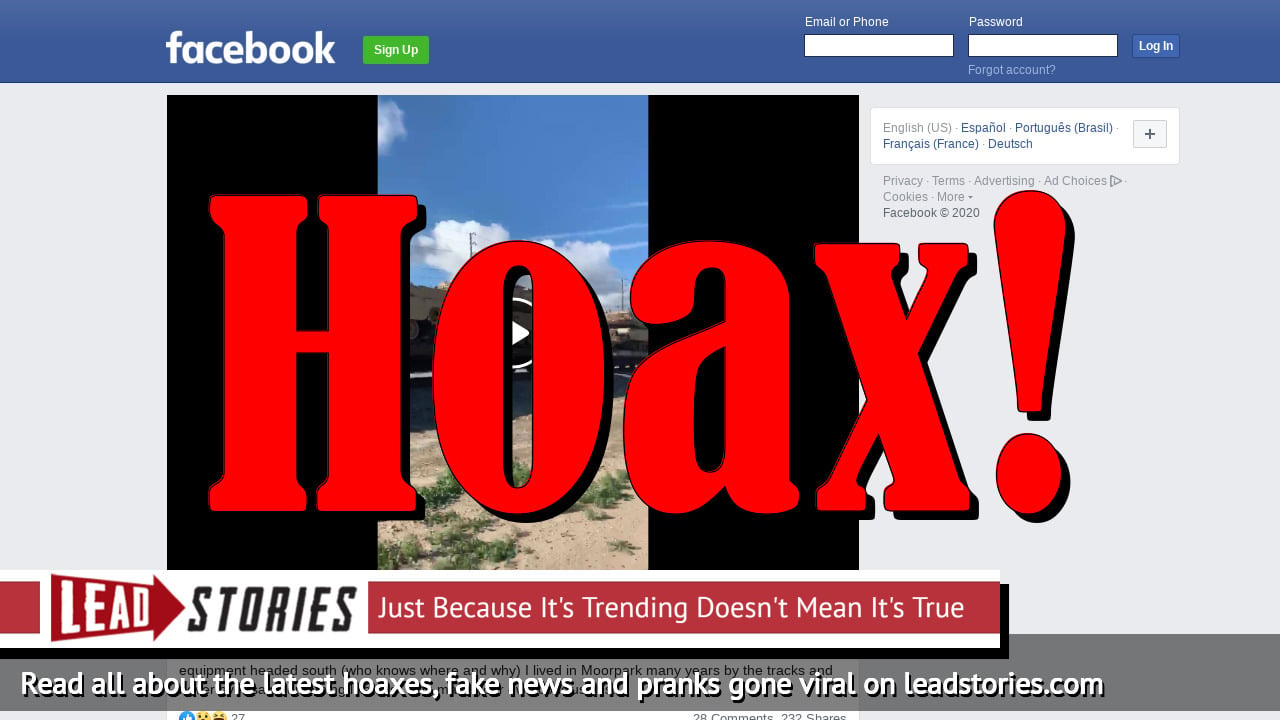