Have more than 120 million people died in the United States from COVID-19, as Democratic presidential candidate Joe Biden is heard saying in a campaign speech? No, that's not true: the number, as of June 25 -- the day the comment was made -- was roughly 120,000 dead, according to the Johns Hopkins Coronavirus Resource Center. A pool reporter covering the Biden event in Pennsylvania later forwarded a statement from the campaign, saying that Biden did immediately correct himself.

The quote from Biden appeared on social media and in multiple media outlets, including an article (archived here) published by Fox News on June 25, 2020, titled "Biden slammed after wrongly saying 'we have over 120 million dead from COVID'". The story opened:

The Fox story acknowledged that Biden tried to correct himself, writing:

As of Thursday, there have been more than 122,000 - not million -- coronavirus deaths in the United States, according to Johns Hopkins figures.

While Biden appears to immediately catch himself after his gaffe -- the pool video of Biden's comments cuts off after he made the remark - Republicans were quick to jump on the former vice president's comment.

"WHAT IS GOING ON WITH JOE BIDEN?" Steve Guest, the Republican National Committee's rapid response director, tweeted out with a link to the clip.

Here is the full video of Biden, as shown by the YouTube channel of PBS (The quote of the 120 million figure is at about the 23:25 mark):

At the time, Biden was talking about impact of the virus on mental health due to lost jobs and more. He then says:

Now we have over 120 million dead from COVID.

Biden then closes his eyes and attempts to correct himself very quickly: "Or, 100, I mean...," before the video cuts out.

Here is the Twitter comment that Fox was referring to, from the Rapid Response Director for the Republican National Committee, or RNC:

WHAT IS GOING ON WITH JOE BIDEN?

Joe Biden just said, "Now we have OVER 120 MILLION dead from COVID." pic.twitter.com/QBQTDyzzZt

Biden has come under attack from Republicans for his age and what President Trump described in a current ad as being "diminished." Biden, 77, is three years older than Trump.

Here is the Trump campaign's quick hop on the gaffe, as tweeted June 25:

He just falsely claimed 120 million Americans (more than one-third of the country) died from the coronavirus.

This is after he previously claimed 150 million Americans died from guns.

He's not playing with a full deck, folks. #BarelyThereBiden pic.twitter.com/GwKgdiFjdb

Here is a screenshot of the coronavirus page on the site for the Centers for Disease Control and Prevention, showing the totals from June 25, the day of Biden's slip-up: 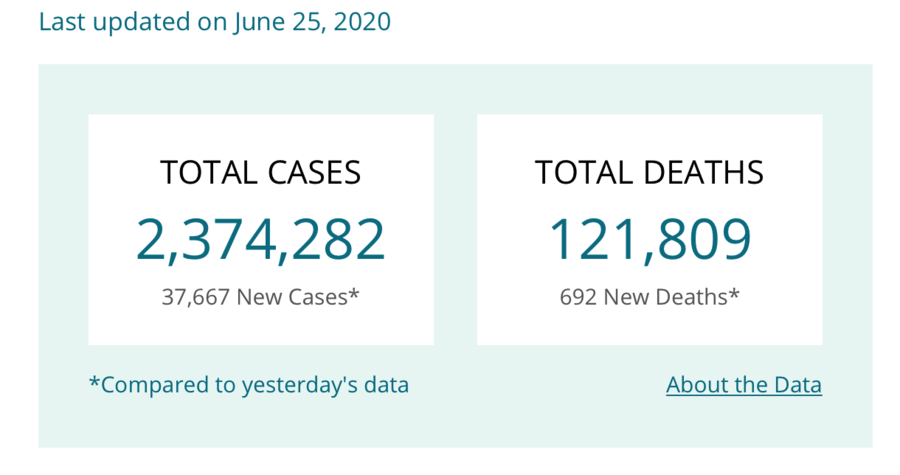 A pool reporter from the event on health care said the comments were made just prior to Biden's prepared remarks. The campaign forwarded the reporter a statement that included what it said was Biden's full comment: