Is China putting California garlic growers out of business? No, that's not true. The amount of garlic the United States imports from China has gone down for the past four years, according to the United States Department of Agriculture.

The claim appeared as a post (archived here) where it was published on Facebook on May 5, 2020 under the title "Know Your Garlic." It opened:

China is putting California garlic growers out of business, and YOU can stop it. Less than ten years ago, all of our garlic was grown in this country, primarily in CA. Now less than 40% is grown here and most of it (60%) is coming from China.

You can tell the difference by looking at the bottom. If the roots are all removed, leaving a concave, clean spot, it is Chinese. This is required by the Ag Dept. to prevent soilborne plant diseases from entering our country. If the roots are still there, as shown below, it is California garlic. The Garlic Growers Assoc. says not one single US grower cleans out the root end.
Is there a difference in quality? Yes, CA garlic routinely scores a higher BRIX scale rating (sugar content) than Chinese and Chinese garlic is noted by chefs for its metallic bitterness.
Let's say no to Chinese garlic.
Will you please share this post on your timeline?China is not putting California garlic growers out of business.

But China is not putting California garlic growers out of business.

Dried garlic imports from China for the past four years:

The combined total imported from China for the past four years: 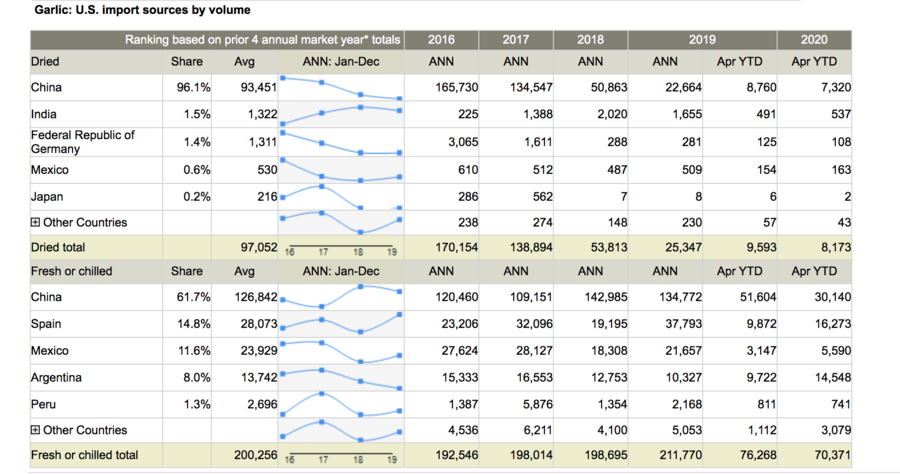 Garlic production for the past four years in the United States:

In an article from Reuters in 2019, California garlic growers celebrated the trade war with China waged by President Trump.

Sales of California-grown garlic are now increasing after decades of losing ground to cheaper Chinese imports. Sales are poised to get even better as Chinese garlic faces even higher tariffs, with no end to the trade war in sight.

An 11-year-old blog post by Christopher Ranch is the source behind the claims in the viral meme, including the details that Chinese garlic has the roots cut off. 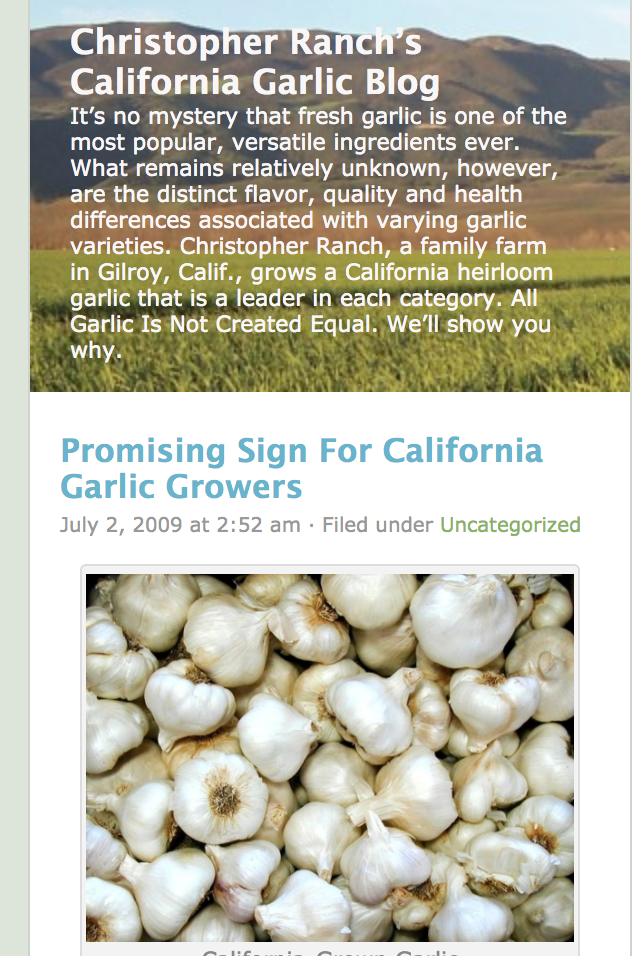 Cheaper Chinese garlic has been wreaking havoc on the domestic garlic market for several years, cheating consumers and customers with a lower-quality product, and threatening the livelihood of domestic, local growers.
Although California-grown garlic is proven to be a more flavorful, fresher and safer product, Chinese garlic is produced and exported to the U.S. in such mass quantities that it can be sold at a considerably lower price. Christopher Ranch, on the other hand, faces higher costs to grow quality, safe garlic, including equitable wages to farmers and workers; maintaining an exclusive heirloom seed program; following an extensive food safety program; sustainable farming practices; cost of land and inputs, etc.
Additionally, because many aren't aware various garlic varieties exist (particularly Chinese, Mexican and Argentine, which offer significant flavor, freshness, safety, healthy, sustainability discrepancies), they take whatever they get, assuming it's the same. And thus, 160 million pounds of Chinese garlic was exported into the U.S. in 2008 - more than all domestic producers combined."

According to the USDA garlic from China, among other bulb produce and other countries around the world, must have the tops/roots removed:

Bulb--A mass of overlapping membranous or fleshy leaves on a short stem base enclosing one or more buds that may develop under suitable conditions into new plants and constituting the resting stage of many plants, such as the onion. NOTE ON ALLIUMS: In the genus Allium, the bulbs may range from large, as in the onion, to poorly developed, as in the leek. From countries outside of North and South America and their adjacent islands (the Western Hemisphere), only the bulbs of alliums without their tops are admissible. However, the entire leek plant is admissible from Belgium and the Netherlands. The above ground portions of Allium spp. are inadmissible because of rusts and pests like the leek moth. Thus, onions, garlic, leeks, and other onion relatives (Allium spp.) are admissible from countries outside the Western Hemisphere only if the above ground portion of the plant is removed."

Ken Christopher of Christopher Ranch confirmed to Lead Stories that the garlic business in California has seen a significant increase in the past years after the Chinese growers flooded the market with cheap garlic in the 90s.

He explained the the Chinese garlic producers flooded the market in the 1990s. "

We learned how to adapt. We learned how to get sophisticated very quickly. We are now going to DC and learning how to lobby congress. We started to see a gradual decline and a gradual expansion of California's garlic. We are getting better at identifying illegal dumping. You'll always see it here but the days of garlic flooding in are numbered subject to the grower.

Articles that contain the claim about American garlic having roots and Chinese garlic cutting off the roots often cite raw food enthusiast David Wolfe as the source. Snopes.com reported on the Chinese garlic claim making the rounds in 2015 and as far back as 2012.

The coronavirus outbreak had an initial effect on the garlic industry when the supply chain from China was temporarily broken and demand from restuarants plummeted as they were forced to shut down. However, the business bounced back with home cooks dramatically increasing their purchases via grocers.

Christopher told the Mercury News on May 20, 2020, that the company typically sold 500,000 pounds of garlic per week and that skyrocketed to 800,000 pounds a week to grocers amid the COVID-19 outbreak. He confirmed that number to Lead Stories.

Christopher said "close to half of the garlic consumed in California is grown in-state by three major farms including Christopher Ranch."

The USDA numbers from 2012 would also not match up to the claim that the United States imported 60% of its garlic from China.

The amount of garlic imported from China that year was only 36%.