The claim appeared in a post (archived here) on Twitter on October 16, 2020, and showed an image of a purported Iowa Farm Bureau email, under the title, "Rumor has it via a Farm Bureau email update that it is withdrawing its endorsement of Joni Ernst." The email featured in the post opened:

As many of Audubon County Farm Bureau members have observed, following last evening's debate between incumbent Senator Joni Ernst and challenger Theresa Greenfield, our current Senator may not be as in tune with the needs of Iowa agriculture and the membership of Iowa Farm bureau, as may have been previously portrayed. In light of this development, we can no longer emphasize the need for our membership to cast their ballots for Senator Joni Ernst.

The Iowa Farm Bureau said in a statement on October 18, 2020, that the email circulating through social media announcing the withdrawal of the organization's endorsement of Ernst is fake. The statement included:

Iowa farmers know Senator Joni Ernst understands agriculture and works tirelessly to increase the economic opportunities for Iowa farmers and rural America, and that is why the Iowa Farm Bureau was proud to designate her as a Friend of Agriculture. She continues to have our full support.

The Farm Bureau is an insurance company and lobbying group that represents the American agriculture industry, from small family farms to large agricultural corporations.

The post on Twitter includes a photo of an email sent on October 16, 2020, with the subject line, Iowa Farm Bureau Daily News Update. It states that after the previous night's senate debate between Ernst and Democratic candidate and businesswoman Theresa Greenfield, "our current Senator may not be as in tune with the needs of Iowa agriculture and the membership of Iowa Farm bureau, as may have been previously portrayed."

While she will remain a 'Friend of Agriculture,' Senator Ernst will no longer receive the extensive backing of Farm Bureau and its partners. 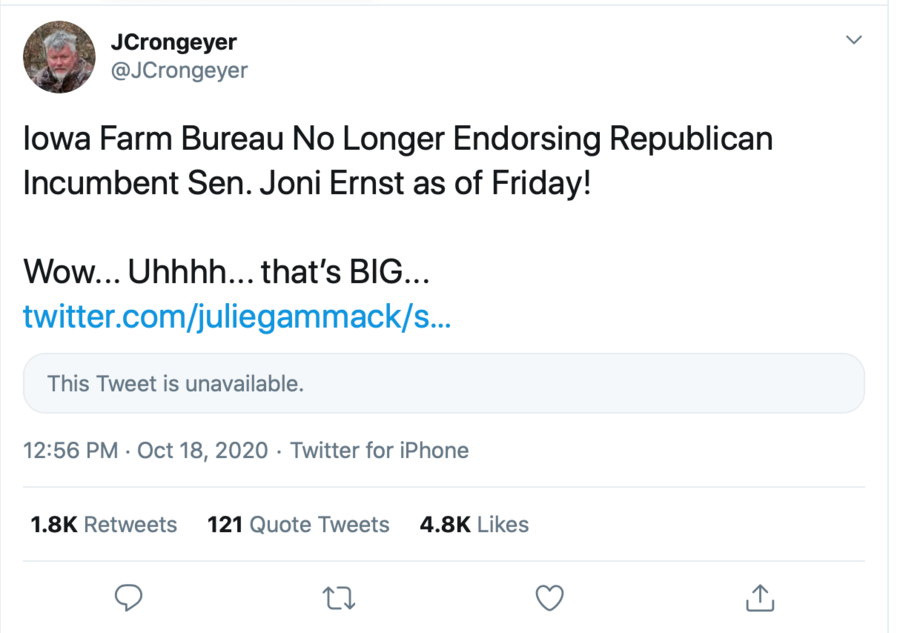 Although Ernst has held the seat since 2015, and received attention when she initially won and became the first woman to represent Iowa in either house of Congress, this year's race is tight. According to analysis by FiveThirtyEight, it's considered a toss-up race.