Did Occupy Democrats post a meme that said Joe Biden admits to voter fraud? No, that's not true. A meme with a photograph of Biden shows the quote, "We have put together the most extensive and inclusive voter fraud organization in the history of American politics and you guys did it for President Obama's administration before this." That is a real quote from Biden that has been taken out of context, as Lead Stories previously reported, however, the meme is fake and was not posted by Occupy Democrats.

The meme appeared as a post (archived here) published by Patrick D. Hampton on Facebook on November 4, 2020. It opened:

He actually said this....

The meme uses the yellow lettering that Occupy Democrats frequently use but it does not appear on the Occupy Democrats Facebook page. There is a tag on the lower right corner of the meme that says "CounterFIT Memes." 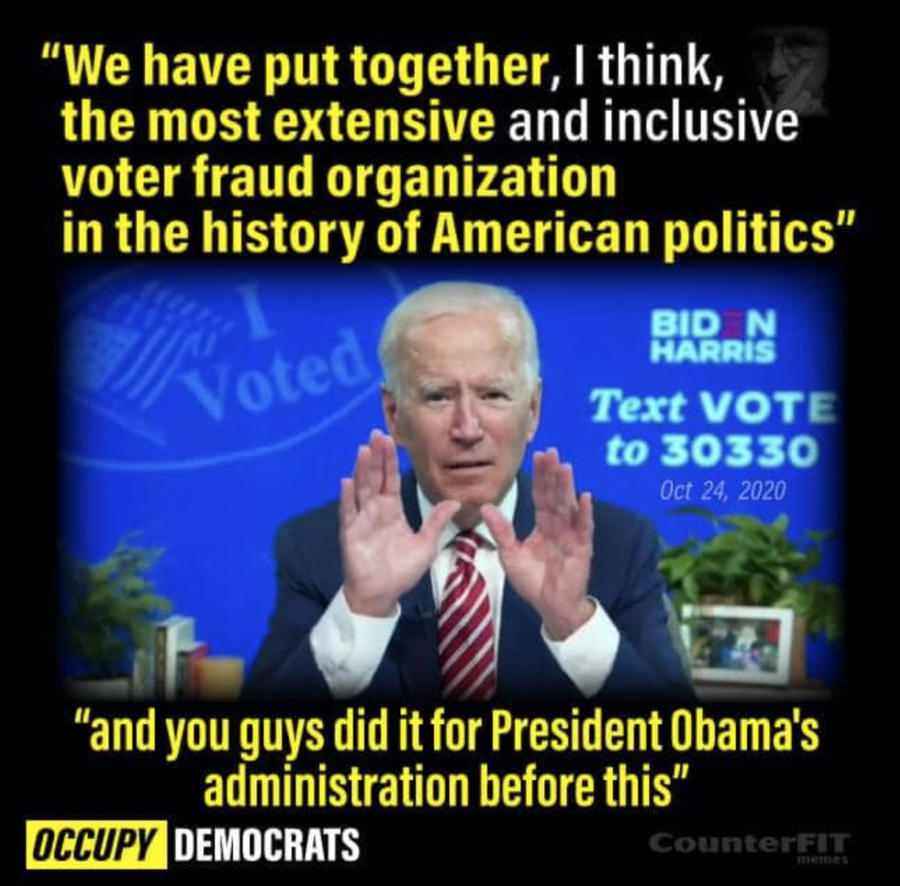 The contents of the meme have been debunked by Lead Stories as missing context. A 24-second video clip of the former vice president shows him saying, "We have put together the most extensive and inclusive voter fraud organization in the history of American politics." That sentence was selectively clipped from comments he made on the Pod Save America podcast on October 24, 2020, in which he was answering a question about how the campaign was prepared to prevent suppression of Democratic votes.

That video was edited to remove context, making his answer (about work the campaign had done to prevent suppression of votes) sound like he was planning to commit voter fraud.

Here is Biden's three part answer to the question of what he would tell people who hadn't already voted or who didn't have a plan to vote yet, asked by Dan Pfeiffer, a former adviser to President Barack Obama.

Secondly, we're in a situation where we have put together, and you guys did it for our administration -- President Obama's administration before this -- we have put together I think the most extensive and inclusive voter fraud organization in the history of American politics. What the president is trying to do is discourage people from voting by implying that their vote won't be counted, it can't be counted, we're going to challenge it and all these things. If enough people vote, it's going to overwhelm the system.

You see what's happening now, you guys know it as well as I do, you see the long, long lines and early voting. You see the millions of people who have already cast a ballot. And so, don't be intimidated. If in fact you have any, any problem go to -- and I don't have the number but it's 833-DEM-VOTE... Call that number. We have over a thousand lawyers, over a thousand of them, they'll answer the phone, if you think there's any challenge to your voting. Go to 833-DEM-VOTE, dial those letters on your phone. That will get you the assistance that we have already put in place.