Did "The Simpsons" animated TV sitcom predict Donald Trump's 2016 victory 15 years before he even announced his candidacy? Did the show also foretell the full electoral map of the 2016 election results? No, that's not true: The cartoon images in this meme do not match the story or date attached to them. The cartoon image of Donald Trump was made after the real Donald Trump announced he was running for president and was drawn to closely match photography from the actual event. It does not eerily predict something that would happen years in the future. The picture of "Mr. Burns" in front of the map did not have anything to do with Donald Trump. When it was aired in 2012, the skit showed Mr. Burns trying to make his hound Shamus choose between Mitt Romney and Barack Obama.

The meme resurfaced as a post (archived here) published by "Weird Fact" on October 30, 2020. The meme's captioning said:

Not only did the Simpson predicted Trump winning, They even predicted the electoral map and they got it right.

This meme's false premise has appeared in several forms. This version has been cropped, but bears remnants from the previous edition (below). The full six-panel meme shows Trump's famous June 16, 2015, escalator descent to announce his intention to run for president in 2016. This deceptive collection of images began appearing on Twitter the day after the 2016 election with the false claim that this was a prediction from 15 years earlier. The two cartoon panels on the left did not originate in the year 2000 but in July of 2015, just a few weeks after the real Trump Tower escalator ride took place. 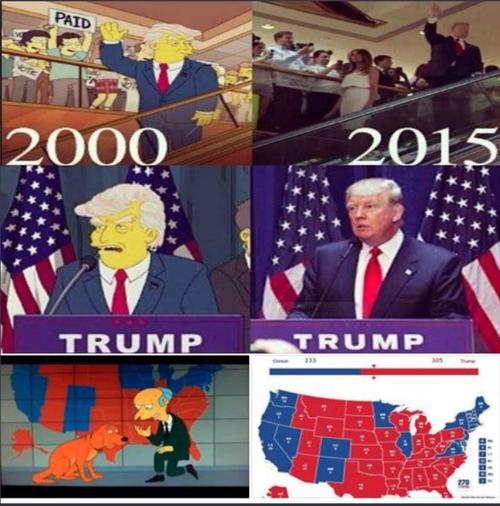 This short video, "hosted by the "Animation Domination on FOX" channel on YouTube shows the animator's after-the-fact rendition of the Trump Tower escalator scene.

The image in the lower left corner of the false meme, Mr. Burns in front of an electoral map, has nothing at all to do with Donald Trump. It was posted to the "Animation Domination on FOX" channel on YouTube in the week before election day of 2012. Mr. Burns tries to entice his hound dog Shamus to choose between Mitt Romney and Barack Obama:

There is little point in showing the discrepancies between the maps. The cartoon was depicting an entirely different election, incumbent President Barack Obama and the Republican candidate Mitt Romney, not the 2016 match between Republican candidate Donald Trump and Democrat Hillary Clinton, but the maps don't compare either.

This illustration shows the areas of difference between the maps from "The Simpsons" 2012 election map and the Actual 2016 Election Results. Pennsylvania, Ohio, Michigan, Wisconsin and Iowa -- all showing blue on "The Simpsons" map -- were actually red in 2016, while Virginia, blue in 2016, showed red with Mr. Burns. 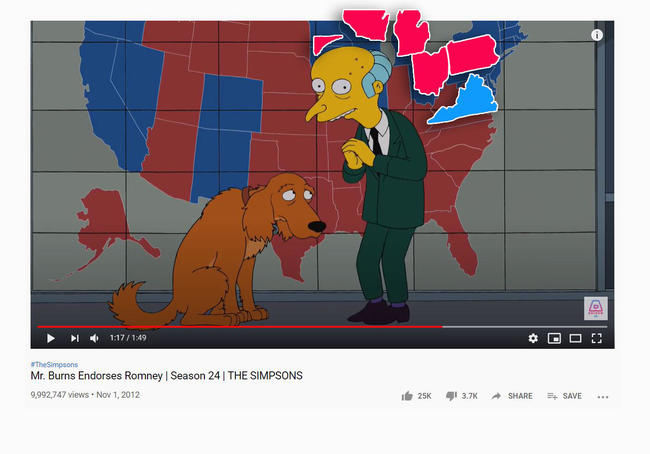 How did Mr. Burns do as far as predicting the Election results in 2012 between Romney and Obama? Much better. Only two states had returns differing from the cartoon. Florida and Virginia, both red on Mr. Burns' map, wound up going blue.