If President Trump invokes the Insurrection Act after the election does it mean that "DemSocialist Anarchists" can be "chased down and legally shot" for the Texas Day of Purge"? No, that's not true: Shooting American citizens beause of their political affiliations is illegal in Texas and every American state even if the president invokes the federal Insurrection Act.

The claim originated in a post (archived here) shared in the Tip for Trump Facebook group on November 1, 2020. The text read: 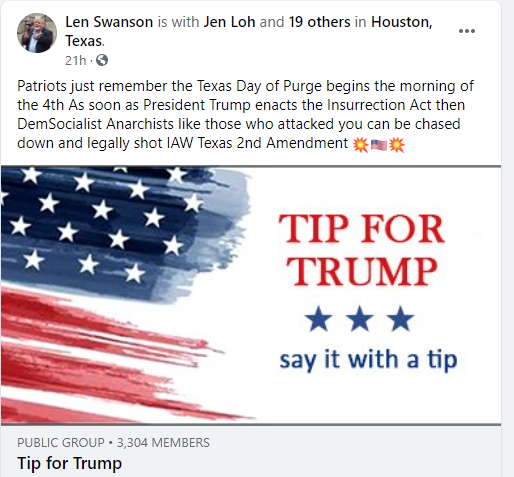 The Insurrection Act of 1807 originally read:

An Act authorizing the employment of the land and naval forces of the United States, in cases of insurrections

It has been amended several times. Click here to see the current law.

Nowhere in the law does it allow the chasing down or killing of people.

President Trump suggested on June 1, 2020 -- when protests and violence were occuring in Washington and other cities -- that he might invoke the act to allow federal troops to police cities. He has not indicated that he is considering a November 4, 2020, order to invoke the act.