Was a real UFO with Aliens filmed in Saudi Arabia? No, that's not true: This video was edited to add the fictional silver spacecraft and alien humanoid in a desert landscape. It's clear this video is the result of editing as the lighting on the spacecraft and the shadow it casts is coming from the opposite direction to the lighting of the sun shining on the buildings nearby. The audio track of this fictional 2016 UFO video was taken from a viral 2014 video purportedly showing a horse flying over a city during a thunderstorm.

This video (archived here) was published by the 'Alien Planet' channel on YouTube on June 15, 2016 under the title "". It opened:

Real UFO With Aliens Caught On Camera From Saudi Arabia | UFO Or Military Vehicle? Alien Sightings
Do aliens exist? Hundreds of pictures and videos of UFOs are taken every year and enthusiasts believe many of them could be proof or even a hidden conspiracy. While some have been debunked as fake, there are still dozens that have left even the experts scratching their heads and wondering if we really have been visited by creatures from another planet. Unidentified flying objects (UFOs) are things seen in the sky that cannot be identified or explained. UFOs are often associated with aliens and conspiracy theories.

Below, a still from the video shows a white building in the background that is lit on the right side, while the UFO is lit from the left. Later at the one minute mark in the video, another building in the foreground comes into view. Like the building in the background, it is lit from the right side. Lead Stories was unable to identify the exact location of the hilly arid landscape featured as the backdrop in the UFO video, but it is clear that wherever it was, this visit from outer-space didn't really happen, but was instead the work of science fiction video editing. 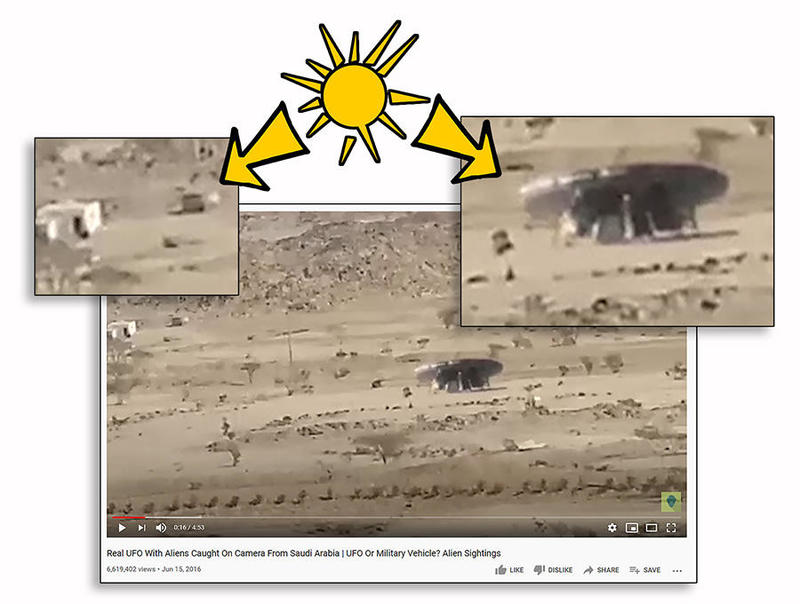 The audiotrack dubbed in the first half of the UFO video was copied from a Flying Horse video that went viral in 2014. The flying horse video was taken during a thunderstorm in the city of Jeddah, Saudi Arabia. During the storm, when lightning flashed, a dark silhouette of a horse was visible against the sky. People in the video could be heard calling out excitedly. This flying horse video went viral and was then featured in several articles debunking the sighting. On November 28, 2014 NaijaGists.com published, "Video Of Black Horse Flying In Jeddah Saudi Arabia Sky Is A Balloon, Hoax." In December of 2014, Snopes published, "Flying Black Horse in Jeddah, Saudi Arabia?" These articles concluded that the horse seen in the sky was a novelty mylar balloon in the shape of a horse.

Below is a copy of the Flying horse video.