Is this Joel Osteen's house? No, that's not true: The sprawling mansion, shown in a Facebook post, is not Joel and Victoria Osteen's River Oaks, Texas, home. It is the Hidden Hills, California, home of Kanye West and Kim Kardashian, according to published reports. The related claims about Osteen's taxes and federal aid are made vaguely and without evidence and the point being made would be sharpened with added context. It's not Osteen who doesn't pay taxes and received "over 4 million in aid", it's his church.

The claims appeared in a post (archived here) where it was published by Fight For Equality on December 22, 2020 with the caption, "Greed and Religion. You know...JE$U$!" The text inside the screenshot of a tweet opened:

This is Joel Osteen's house.
Joel doesn't pay taxes.
Joel received over 4 million in aid.
You got $600.

Claim: "This is Joel Osteen's house"

False: The mansion in the meme has many similarities to the home of Joel and Victoria Osteen, but it is not their house. The two mansions can be compared below. The Hidden Hills, California, home of Kanye West and Kim Kardashian is on the left, and the Osteen's River Oaks, Texas, home is on the right, according to reports. In an article with plenty of photos, DailyMail.co.uk wrote about Kim and Kanye's move just after it happened in January of 2015, "Kim Kardashian and Kanye West finally 'move in to $20million mansion in Hidden Hills following renovations." On August 29, 2017 Heavy.com published an article about what was the Osteen's second home, which includes the aerial view pictured below, "PHOTO: Joel Osteen's $10.5 Million River Oaks Mansion."

The Heavy article was published just days after hurricane Harvey hit Texas on August 25, 2017, with record rainfall that caused widespread flooding. A controversy developed regarding Lakewood church and the ability or willingness for the stadium-sized church to take in and shelter people displaced by the storm. In the article the Osteen's River Oaks home is described and it is mentioned that the year they bought the home their property taxes were $260,000.

Osteen's net worth is around $40 million, and his wife of 30 years, Victoria, is a co-preacher at Lakewood. The couple have two grown children who are known to perform actively in services at the church.

In 2010, the Osteen family moved from their home in Tanglewood, which was valued at $2.9 million, to a $10.5 million mansion in River Oaks, Culture Map reported.

The River Oaks home is a 17,000-square-foot stone mansion in the Tall Timbers subdivision. It's located on 1.86 acres of land and reportedly had six bedrooms, six bathrooms, three elevators and five fireplaces when it was purchased. It also had a one-bedroom guest house along with a pool house. When the couple purchased the home, they had to pay $260,000 in property taxes for the year.

A July 9, 2010, article by Houston.Culturemap.com "After move to $10.5 million River Oaks mansion, Joel Osteen offers Tanglewood land for $1.1 million" This article describes the two Texas homes owned by the Osteens and spells out the technicality that the River Oaks mansion is owned by a trust:

The Tanglewood house is owned by Joel and Victoria Osteen according to Harris County Appraisal District records. The River Oaks home is technically owned by the Covenant Trust, which means the Osteens do not qualify for a homestead exemption on it. They will pay around $260,000 in property taxes on the new home this year.

"The homestead exemption would reduce that amount, but they probably put the ownership in a trust for federal tax purposes that outweighs the benefits of the property tax exemption," surmised a home appraisal specialist who asked not to be identified.

According to reports, Osteen hasn't drawn a salary from the church since 2005. His income comes from best-selling books and related products, such as calendars, daybooks and inspirational pamphlets.

False, worded as it is. Osteen is not exempt from the same property and personal income taxes as any other American and in addition to the property taxes he pays on his personal home, he has discussed his personal tax load publicly on several occasions. On November 18, 2019, FoxBusiness.com published, "Kanye West & Joel Osteen's tax tales led both to million dollar church." This story includes a personal anecdote told by Joel Osteen about how he has paid taxes.

False, as worded. Osteen the individual would not have been eligible for Paycheck Protection Program funds under the first round of COVID-related relief, the CARES Act.

Administered by the Federal Small Business Administration, the program aimed to help keep employees on the payroll through the hardships of the coronavirus pandemic. There was a limited window to apply for these loans, which closed on August 8, 2020. In the early months of the pandemic, the Lakewood Church did not apply for the loan because church officials did not think the shutdowns would last very long. At some point when asked if the church had applied for the loan the answer was no -- but as the coronavirus crisis lagged on, Lakewood Church did eventually apply for the PPP loan and was granted $4.4 million dollars. This triggered accusations Osteen had lied about the loan.

Robert Downen, a writer for the Houston Chronicle, tried to clear up the matter with this article on the loan issue: "Joel Osteen's Lakewood Church got $4.4 million in federal PPP loans." He tweeted:

The person who wrote the article #Lakewoodhttps://t.co/Xhz4z7EnBx

In the article, a spokesperson from Lakewood Church, Don Iloff, is quoted:

Believing the shutdown would only last a few weeks, Lakewood did not initially apply for PPP assistance during the first half of the program. However, as the shutdown persisted month after month, given the economic uncertainty, Lakewood finally applied for the PPP loan and has been able to provide full salaries and benefits including health insurance coverage to all of its employees and their families.

Neither Osteen nor his wife Victoria have received salaries from Lakewood since 2004, and the PPP loans do not provide any personal financial benefit to them, whatsoever.

The Lakewood Church spokesperson said that the Osteens have not drawn a salary since 2004, while most press reporting says the year was 2005. Lead Stories does not have access to documents that would resolve the discrepancy, but none of the Paycheck Protection funds would make their way to his pocket.

While researching this article, Lead stories discovered several other mansions which were falsely presented as Joel Osteen's home. Below are examples of Facebook posts critical of Joel Osteen, but illustrated with other people's mansions. The brick home pictured on the left is in Thousand Oaks, California. It was once the home of Wayne Gretzky, and then Lenny Dykstra. In an October 22, 2020, article in the LA Times, an article, "Wayne Gretzky eyes $22.9 million for Thousand Oaks estate" explains that Gretzky purchased the home again and has now put it back on the market. The home with the tile roof, pictured on the right, is in Beverly Park, Los Angeles. The home was built by the Al Saud family and belongs to Prince Turki bin Nasser of Saudi Arabia. Dirt.com featured the home, one of two mansions on the property, in a June 14, 2020 article, "Saudi Prince Asks $40 Million for 39-Bathroom Beverly Park Compound" 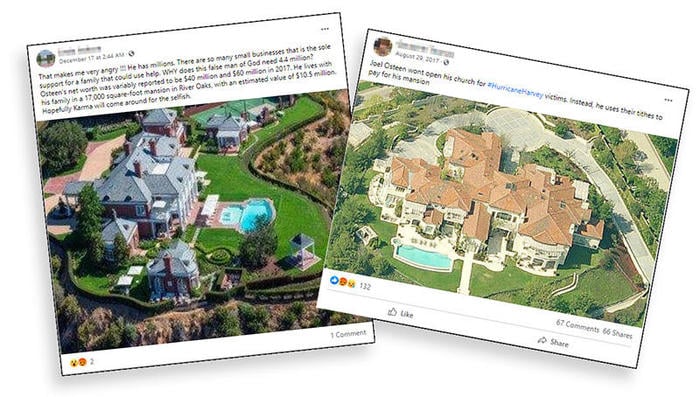 This Beverly Park home of Prince Turki bin Nasser is also featured in some memes, one making a false comparison between Billy Graham's home and Joel Osteen's. The brick house in the meme on the left was Billy Graham's childhood home on the outskirts of Charlotte, North Carolina. The Graham Family Homeplace is now a part of the Billy Graham Library. Another satirical meme featuring the Beverly Park home makes a comparison between Osteen and Mark Zuckerberg, whose home was featured in this Architectural Digest article, "Inside the $7 million home of Mark Zuckerberg in Palo Alto, California."

Joel Osteen is not the only famous preacher to be misidentified as the owner of the Prince Turki bin Nasser's Beverly Park mansion, many image search results return with the aerial photo mislabeled as the home of now-deceased televangelist Paul Crouch. 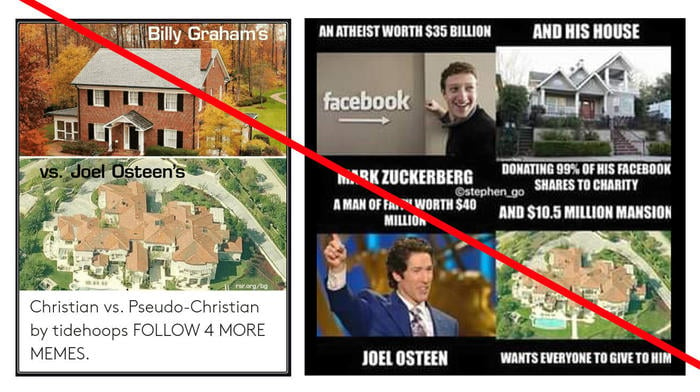