Is a "China man" who stayed close to Joe Biden before his inauguration his "Chinese handler"? No, that's not true: The man identified in a video as Biden's "Chinese handler" is actually a member of the secret service team protecting the new president. The same man, seen walking close behind Biden as he exited an airplane at Joint Base Andrews on January 19, 2021, is the person identified by the U.S. Secret Service in an Instagram post as a secret service agent protecting President Biden in the hours after his inauguration.

The claim appeared in a video in a Facebook post (archived here) shared by the British-based Patriots United page on January 20, 2021. The video, which showed the agent walking with Biden, was introduced with this text message:

Biden his wife and a China man arrive in Washington DC!
Biden the communist puppet. this is really an eye-opener on how dangerous and real China's influence is in America 🇺🇸. His Chinese handler is never more than 3 feet away.
🦅🇺🇸 JOIN OUR SNOWFLAKE FREE COMMUNITY 🇬🇧🌹

The "Chinese handler" claim appeared in various forms on social media, including in a Telegram post which featured another video of the agent with Biden and the text:

Biden's Chinese handler is sitting two seats directly behind him and Jill. During the national anthem, everyone turned around to face the flag, except for his handler. He stared at Biden the entire time.

The Secret Service was not so secret about pointing out that the man is their man, not China's. This Instagram post features his photo:

Lead Stories zoomed in to give you a closer look at the agent: 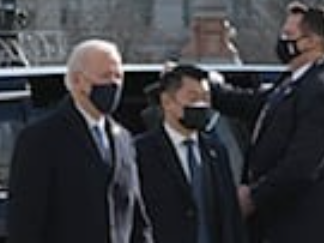 He is the same person as the man pinpointed in the Patriots United video: