Does this collection of photos show the inner workings of airplanes that spray "chemtrails" and has this information been "declassified"? No, that's not true: These photos do not show "chemtrail spraying equipment." The photos are either misidentified, are a joke, or are intentionally unidentified, but they have been presented in a false context allowing imaginations to run wild. There is no evidence that longer-lasting condensation trails behind jet aircraft are part of a large-scale covert (or declassified) government chemical spraying program that produces "chemtrails."

The claim reappeared as a collection of photos in from a post (archived here) published by the Facebook page 'Nikola Tesla' on January 14, 2021, with the caption:

So Chemtrails are declassified

The 27 photos in the collection are not captioned, leaving much to the imagination. In the comments some people offered their own debunks while others offered additional photos and questions. Images in this collection have been heavily reproduced on other chemtrail conspiracy websites, making for a daunting amount of conspiracy clutter to wade through in order to find the original source of the image with an explanation of what it shows.

"Chemtrails" -- like condensation trails, or contrails, left in the sky by aircraft, only supposedly laced with chemicals -- have become fodder for several conspiracy theories. A 2018 BBC.com article explained:

"Chemtrail" conspiracy theorists vary in their claims. But some of the most popular include the belief that governments control the weather on a massive scale, that scientists carrying out legitimate research about how to counteract climate change through a process called geo-engineering are secretly poisoning us, or even that secret powerful groups are spraying us with chemicals to make us pliant and easy to control.

Lead Stories has debunked several chemtrail-related claims in articles you can see here.

The National Weather service has presented an article on clouds and contrails, explaining contrails this way:

A contrail is the condensation trail that is left behind by a passing jet plane. Contrails form when hot humid air from jet exhaust mixes with environmental air of low vapor pressure and low temperature. Vapor pressure is just a fancy term for the amount of pressure that is exerted by water vapor itself (as opposed to atmospheric, or barometric, pressure which is due to the weight of the entire atmosphere above you). The mixing occurs directly behind the plane due to the turbulence generated by the engine. If condensation (conversion from a gas to a liquid) occurs, then a contrail becomes visible.

If contrails persist for a long enough period of time, say on the order of an hour or more, they can spread out across the sky due to the prevailing winds at the level at which they formed ... Persistence of contrails is neither an indication that they contain some kind of chemical, nor that it is some kind of spray. As a matter of fact, sailors have known for some time to look specifically at the patterns and persistence of jet contrails for weather forecasting. On days where the contrails disappear quickly or don't even form, they can expect continuing good weather, while on days where they persist, a change in the weather pattern may be expected.

On August 12, 2016, the results of a survey of 77 scientists were published in, "Environmental Research Letters." Smithsonian Magazine covered this with a short article titled, "Science Officially Debunks Chemtrails, But the Conspiracy Will Likely Live On - A panel of 77 atmospheric scientists and geochemists weigh in on the controversial streaks in the sky." The article summarizes:

Conspiracy theorists have amassed huge dossiers of "evidence" claiming that chemtrails are longer, brighter and do not dissipate as quickly as normal aircraft contrails. They have photos, anecdotes and samples collected from the air and water. Though scientists have long battled against these unfounded claims, they haven't made much headway. But with a recent study, researchers from the Carnegie Institution for Science hope to put these rumors to rest.

The researchers provided the available chemtrail evidence to 77 atmospheric scientists and geochemists for evaluation. "I felt it was important to definitively show what real experts in contrails and aerosols think," Ken Caldeira, an atmospheric scientist and author on the study, says in a press release. "We might not convince die-hard believers that their beloved secret spraying program is just a paranoid fantasy, but hopefully their friends will accept the facts."

In the study, published in the journal Environmental Research Letters, the scientists were asked if they had ever uncovered possible evidence of a government chemtrail program in their research. Of the 77 scientists, 76 said no.

Many of the photos in this collection show ballast barrels inside airplanes that are being tested before being put into service. The barrels, filled with water, simulate the weight of the passengers, interior fittings or cargo that the plane would eventually carry. Some ballast tank systems include piping that can shift the water to simulate different weight distribution scenarios.

Two of the photos show the chancellor of Germany, Angela Merkel, with a group of people. A photo archived on the German federal government website shows another view of this tour of an Airbus A350 on May 20, 2014. 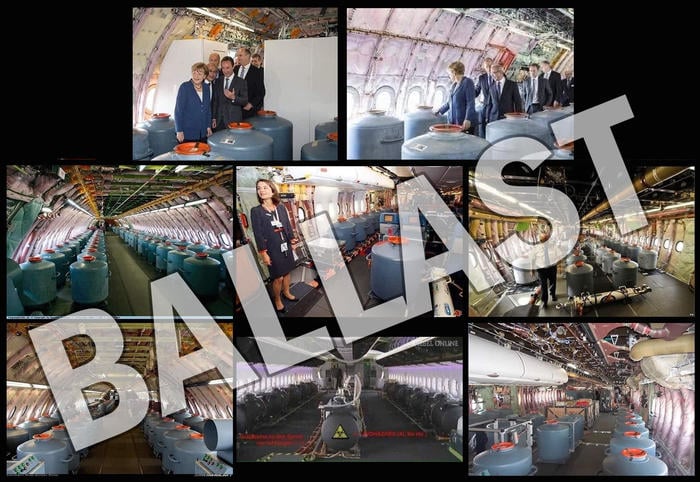 One photo, of the interior of an airplane with purple cabin lighting, appears to show a black ballast tanks marked with a triangular yellow biohazard sticker. Red text has been added which says "Schläuche zu den Spruh vorrichtungen" (translation: Hoses to the spray devices) and "Biohazard (Al, Ba etc.)" This biohazard sticker is photoshopped into the picture, and the captioning is false. An interior photo of this Boeing 747-8JK cabin set up for testing and photographed from the same perspective appears on the Airliners.net website. The Boeing jetliner was photographed at the 2011 Paris Airshow and the photographer's caption says, "The rear section of the main deck. The barrels are used to hold water for weight balance purposes."

Another group of photos in this album feature the patches and challenge coins of #TeamChemtrail. These novelty patches are a running joke with pilots and several websites and social media accounts have spring up over the years including a Twitter account originating from the Ramstein Airbase in Germany. The original teamchemtrail.com website is no longer running. The archive of the page explains:

We are happy to present to you the official TeamChemtrail website where we work hard to bring forth some of the most entertaining pilot products you can find. Deep in the Chemworks we are constantly working hard to bring you new and improved ways of enlightening and scaring all conspiracy theorists.
Our operation took off unexpectedly after creating our TeamChemtrail patch and selling it to a few friends. Before we knew it the worldwide web had created a firestorm of orders and controversy, and we realized we had to grow fast to meet the excitement generated! 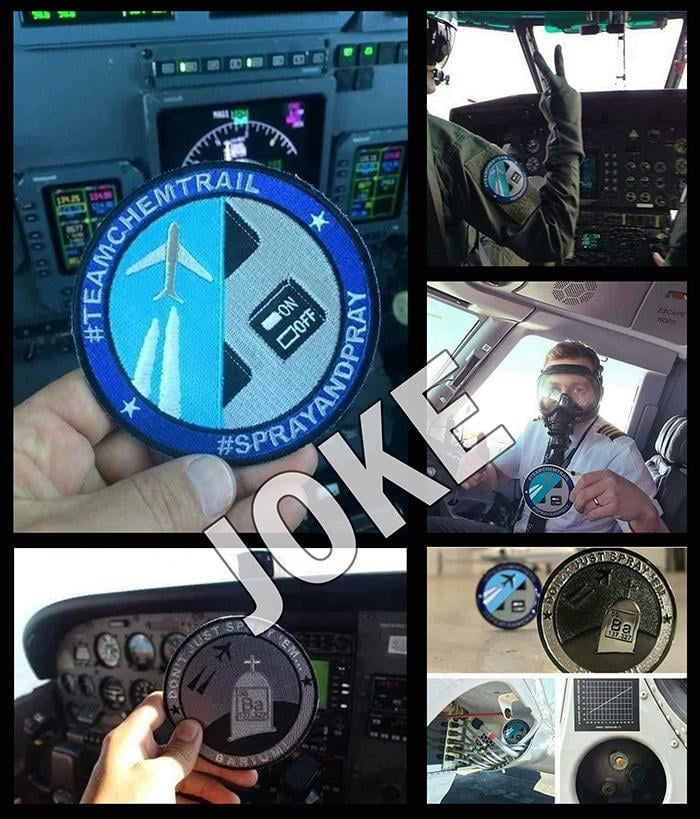 Yet another joke image from this collection shows a toggle switch for chemtrails with two settings, on and on. This photoshopped meme image is a remade spin-off from a series of memes originally about Huey helicopters and the 1969 Creedence Clearwater Revival song "Fortunate Son." 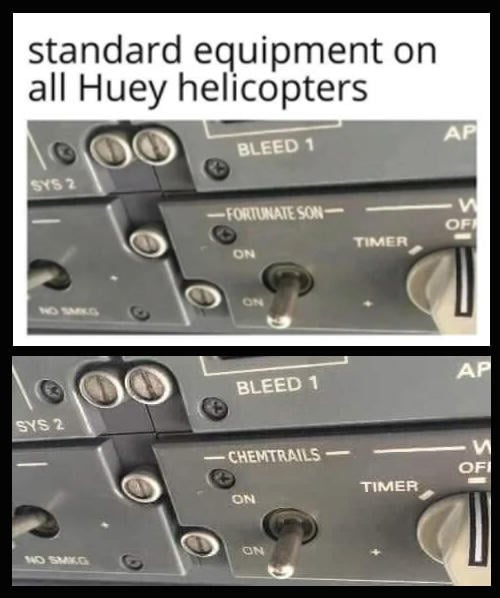 Some of the images in the collection show large tanks inside the airplanes. The image below in the upper left corner is a U.S. Air Force photo showing a C-130H Hercules aircraft set up to control mosquitos in East Texas. The photo in the upper right shows the cargo bay of a DC-4 and the four tanks that can each carry 3,000 gallons of oil dispersant to spray on an oil spill. The lower pair of photos show slightly different views of the same planes fuel carrying tanks. The photo on the left appears on a German language chemtrail conspiracy debunking site and the photo on the lower right is a September 22, 2013, photo of the UK Air Force Vickers VC10-K3 that has been converted to carry 78 metric tons of fuel. 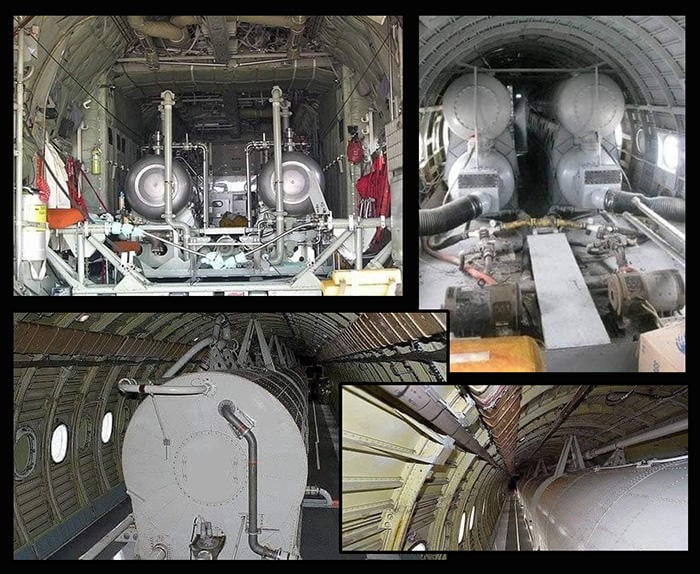 The red funnel shaped object pictured below is a drogue which will stabilize a long trailing antenna. TheDrive.com published an article, "Here's Why An E-6B Doomsday Plane Was Flying Tight Circles Off The Jersey Shore Today," which explains what the five-mile-long Very Low Frequency (VLF) communications system is used for. The original photo by /-/ooligan was published on Flickr on November 13, 2010.

On the upper right, is a photo from June 23, 2008. It depicts a North Carolina Air National Guard C-130 Hercules being loaded with a modular system of tanks that would hold fire retardant for fighting wildfires.

The lower right photo of the silver cylinder mounted under a wing is heavily reproduced on chemtrail websites but the original source of the photo is elusive. Other photos of cloud seeding equipment (here and here) that can spray silver iodide show nearly identical canisters to the one in this photo. Cloud seeding is a weather modification practice that aims to cause precipitation by introducing condensation nuclei materials to a cloud, either from above or below. The practicality and effectiveness of cloud seeding is questioned, and its adoption varies around the globe, but the practice of cloud seeding is not a secret. 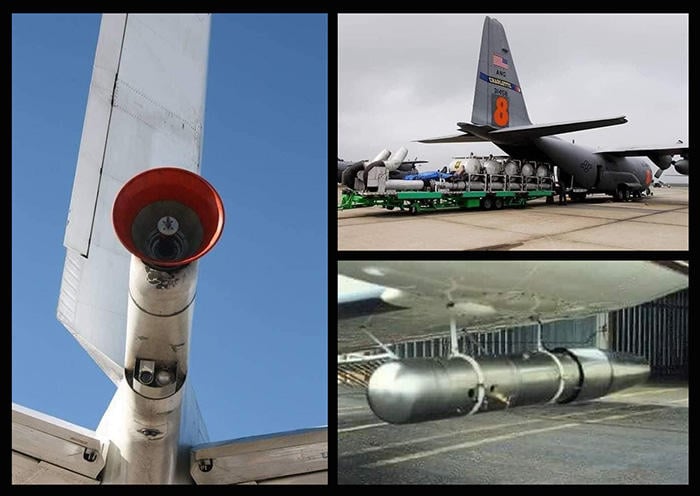 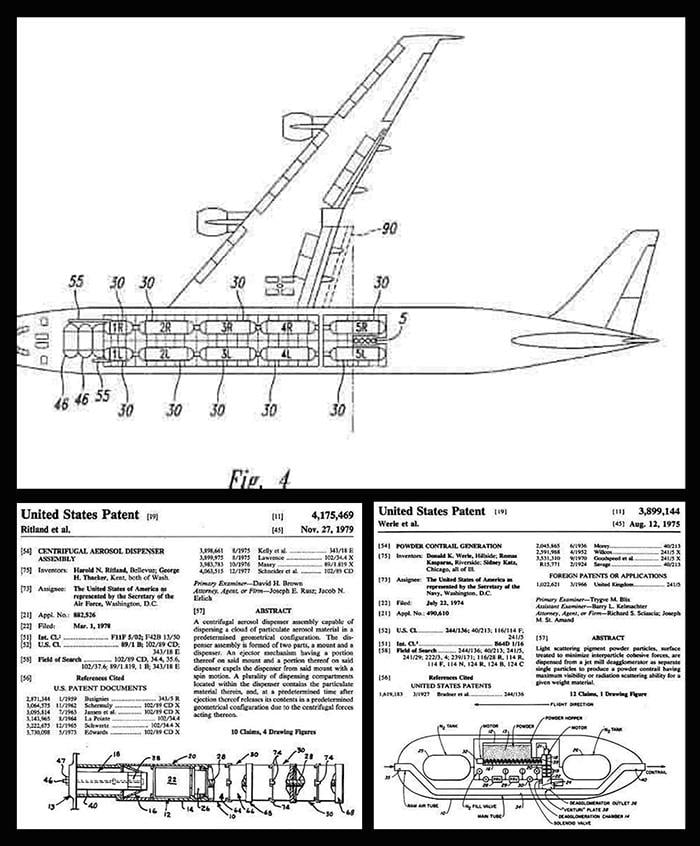 The photo below depicts a trailing wake vortex study conducted by NASA in 1974. The original NASA image has been flipped horizontally, perhaps to defeat efforts to do a reverse image search. The flipped image is marked up to show "chemtrail proof" that there are only four engines but six "nozzles." This plane is not spraying "chemtrails." The NASA writeup explains:

Six smoke generators were installed under the wings of the 747 to provide a visual image of the trailing vortices. The object of the experiments was to test different configurations and mechanical devices on the747 that could be used to break up or lessen the strength of the vortices. The results of the tests could lead to shorter spacing between landings and takeoffs, which, in turn, could alleviate air-traffic congestion.

One image shows a "Certificat D Analyse." This document has additional text added to it that says, "Chemtrails Analyse" and "Der Aluminium Wert is 10,000 Fach zu Hoch! Aluminium verursacht unter anderem Alsheimer!" (translation: The aluminum value is 10,000 times too high! Among other things, aluminum causes Alsheimer!) The original water test result certificate without the added text was published on an August 14, 2015, blog titled, "They Are Killing Us With Chemtrails In Switzerland!!!! (Stunning Pictures)" One of the photos included in the blog happens to be the 1974 NASA vortex study image featured above. According to the blog, the test was ordered by the author and they state that the water sample was collected from their jacuzzi cover.

Last but not least... in June I had rainwater that accumulated on my jacuzzi cover analyzed and guess what I found...among other things 38mg/liter of aluminium...that is 38'000 microgram/liter!!! Normal acceptable amounts found in rainwater are between 10 and 1200 micrograms!!!! YOU DO THE MATH!
And there should be ABSOLUTLY NOBarium (440ug/l) or Strontium (260ug/l)!

Lead Stories has reached out to the Swiss water testing firm Interlabor for comment and will update this article, as appropriate, when they respond. 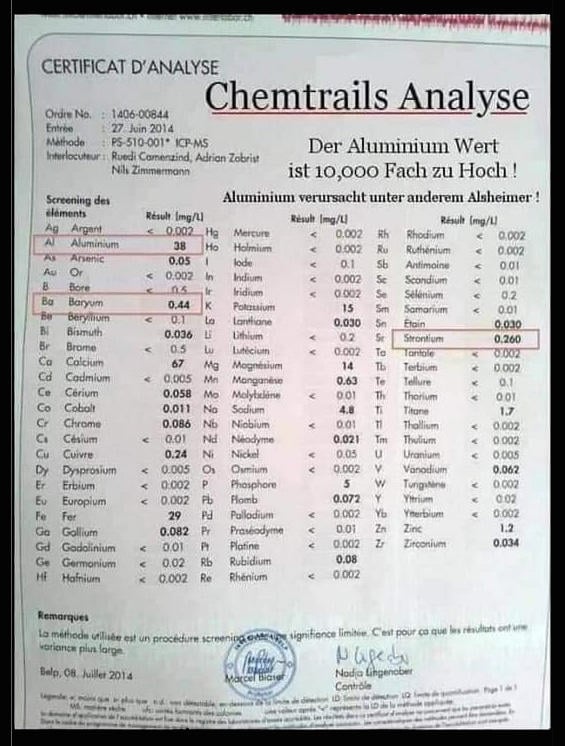 This final photo shows a Boeing 777-21H flying from Frankfurt to Dubai. The image shows an uncommon perspective, but regular water vapor contrails that are caused by temperature and turbulence of the passing jet's engines. 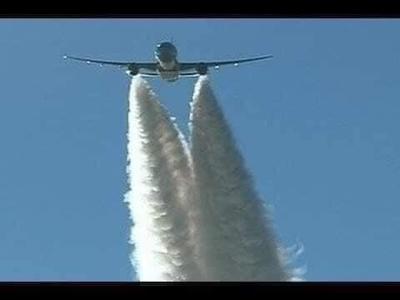