Did a broken link that included the word "Guantanamo" on the website of the Office of Military Commissions have any special significance? No, that's not true: There's no evidence the link, which took users to a dead page on the site of the U.S. District Court for the District of Columbia, had any import at all. The federal court has handled cases related to detainees held at Guantanamo Bay, Cuba. Information on such cases can still be seen online. Sometimes, a bad link is just a bad link. After Lead Stories contacted the Office of Military Commissions for comment on this story, the link was corrected.

The claim appeared in a Facebook post (archived here) visible to the public on January 19, 2021. It opened:

Step 1: Visit this official Military website https://www.mc.mil
Step 2: Click "Calendar" under the Calendar icon
Step 3: Click: "US District Court for DC
STEP 4: The link is dead but look at the last word in the URL

At the time of writing, the post was no longer visible. This is what it looked like before: 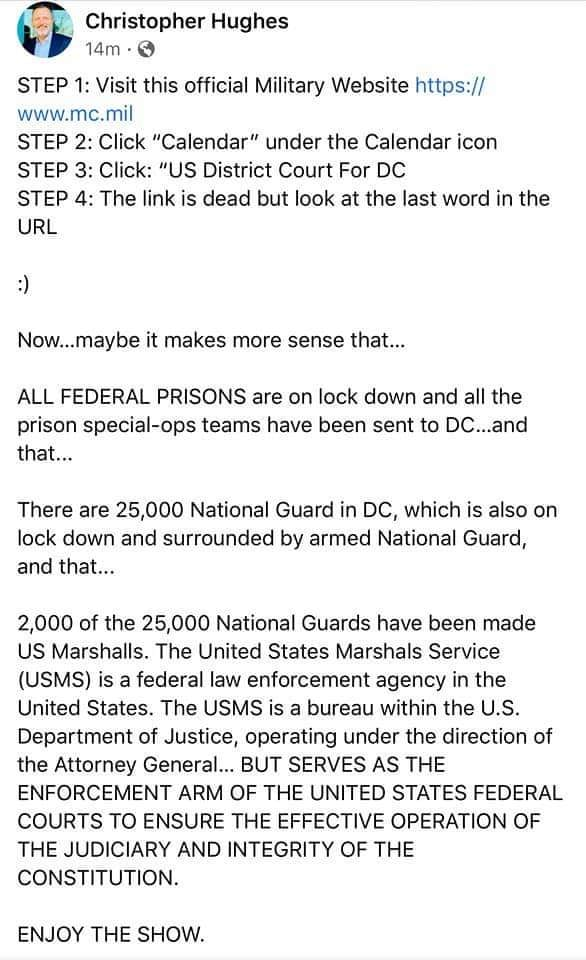 Now...maybe it makes more sense that... ALL FEDERAL PRISONS are on lock down and all the prison special-ops teams have been sent to DC...and that...There are 25,000 National Guard in DC, which is also on lock down and surrounded by armed National Guard, and that...2,000 of the 25,000 National Guards have been made US Marshalls. The United States Marshals Service (USMS) is a federal law enforcement agency in the United States. The USMS is a bureau within the U.S. Department of Justice, operating under the direction of the Attorney General... BUT SERVES AS THE ENFORCEMENT ARM OF THE UNITED STATES FEDERAL COURTS TO ENSURE THE EFFECTIVE OPERATION OF THE JUDICIARY AND INTEGRITY OF THE CONSTITUTION.

This fact-check does not encompass all of the post's claims. It just looks at the claim that a broken link means that something unusual or significant is about to happen. First, a bit of background is needed to understand the post.

Believers of QAnon, a conspiracy theory that claims Donald Trump is fighting an evil cabal of Democratic pedophiles, often speak of something called the "Storm." The Storm is supposedly the moment when Trump will expose the cabal and punish all those involved. Exactly how and when the Storm will unfold is a matter of great speculation within the QAnon community.

The post was clearly referring to the Storm, suggesting that the broken link and other signs pointed to an upcoming reckoning.

It was true that if you followed the post's step-by-step instructions, you'd arrive at a URL with the word "Guantanamo" in it. The page, on the site of the U.S. District Court for the District of Columbia, was down. However, the page wasn't always down, as can be seen in this archived version of the URL. Also, it shouldn't be surprising that the federal court has information related to "Guantanamo" on its site, given that it has handled cases related to detainees held at Guantanamo Bay, Cuba. Information on such cases can still be seen on the site.

The mc.mil page has been corrected so that the correct site (https://www.dcd.uscourts.gov/guantanamo) is now linked when you click on "U.S. District Court for D.C." under the "Cases" header.

Bottom line, the fact that there was broken link does not prove anything. Sometimes, a bad link is just a bad link. It was corrected.