Did a woman walking her dog bravely step out into the road to wake a person passed out asleep at the wheel of a moving car that was accurately circling a roundabout? No, that's not true: This is a "caught on camera" skit from Rick Lax Productions that was designed to look like it had been captured by a traffic camera. The driver of the car was just pretending to be asleep.

The video appeared in a post (archived here) published by The Tus House on January 31, 2021, under the title "When she hit the windshield...😲". The captioning of the video with a suspenseful music soundtrack reads:

This driver is asleep.
The woman walking her dog is about to notice
Things are about to get INTENSE
But the sleeping driver keeps circling...
Every second counts as the driver could hit someone at any moment
Now she realizes the driver is out cold!

The suspense builds as the woman, with a little dog on a leash, talks on her cellphone and makes no progress in dealing with the situation of a passed-out driver circling the roundabout. The captions continue to drag out the suspense, a few words at a time:

She tried to get the attention of the driver behind them...
But they drive off. She realizes SHE needs to help
Unbelievably, the car keeps circling...
The woman tries to call 911, but realizes she needs to do something ASAP
There's a lot of traffic, so she waits for the next pass
This is her chance...
She yells but the driver doesn't wake up!
The woman starts to panic...
This time she risks herself and approaches the roving car
Thankfully, she awakens the driver before an accident happens
What would you do if you saw this happening?
SHARE THE LOVE FOR THIS GOOD SAMARITAN!

Finally, two minutes and forty seconds into the video, the woman, with the little dog still trailing behind, steps off the curb and pats the side of the circling car which lurches to a stop. Only after the car stops does the seemingly sleepy driver make a theatrical gesture of being startled awake. No one in the video ever hit the windshield, that title is pure clickbait.

This video was posted to the Facebook Page "The Tus House," labeled "just for fun," which is one of several Facebook pages that are part of Rick Lax Productions.

Lead Stories on February 2, 2021 wrote about a skit involving a staged traffic stop that was made to appear as though filmed by the officer's patrol car dashcam. That video was posted on the Facebook page of The Jibrizy Show, which is under the umbrella of Rick Lax Productions, a company that has received national media attention for its shows from The New York Post, Tubular, Vegas News, and Bustle. The website describes the company:

Rick Lax Productions specializes in magic shows (Making Magic, The Justin Flom Show) and comedy shows (The Pun Show, The B Family). But we've got lifestyle shows (The Adley Show) and inspirational shows (The Elly Brown Show), too. Some of our shows transform popular 'found footage videos' through unique editorialization and other meaningful alterations (like Rick Lax's Favorite Videos). But most of our shows feature fully original videos (like The Rick Lax Show and The Ryan And Amber Show)."

Although The Tus House was not mentioned in the statement, the profile image of The Tus House page is labeled "Rick Lax Productions." There are many similarities in these videos on this page and others. The palm trees, the ticking timestamps and cam lettering, the green ghillie suit which shows up in prank videos posing as a bush or a Christmas tree, but the most consistent element shared by the videos is the length, typically just over three minutes. 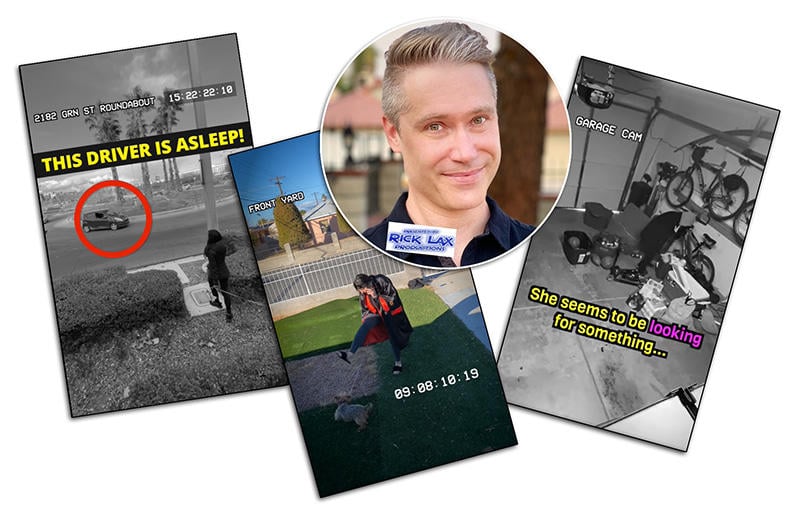 Currently Facebook has a monetization program that will allow some content creators to make money from ads that are shown along with their content. Not all content qualifies to be monetized. A creator needs to be popular and have a large audience. Two of the requirements for eligibility for "in-stream ads" listed on the Facebook for Business lessons mention three-minute-long videos:

Have 30,000+ 1-minute views
This metric helps determine how successfully you'll be able to monetize with in-stream ads. In the last 60 days, you need to have had at least 30,000 one-minute views on videos that are at least three minutes long.

Some currently ad-free content has been produced with the long-term goal to become a monetized channel but that has not happened yet. This has given rise to some creators making content that is designed to keep the viewer on the hook to at least the one-minute mark, and producing videos that drag along to a few seconds past the three-minute mark to make the cut for in-stream monetization if and when that would happen.