Is Kamala Harris' book in "welcome bags" for illegal migrant children in California? No, that's not true. The spokesperson for the city of Long Beach told Lead Stories there was one copy of the book that appeared in a widely circulated photo, but the vice president's book was not part of the welcome bags.

The claim appeared in an article (archived here) where it was published by DJHJ Media on April 26, 2021 under the title "White House Denies Knowing Anything About Kamala Harris' Book Ending Up In 'Welcome Bags' For Illegal Migrant Children in California". It opened:

President Joe Biden handed the border crisis off to Kamala Harris so that she could get a handle on the humanitarian catastrophe the Biden administration created. 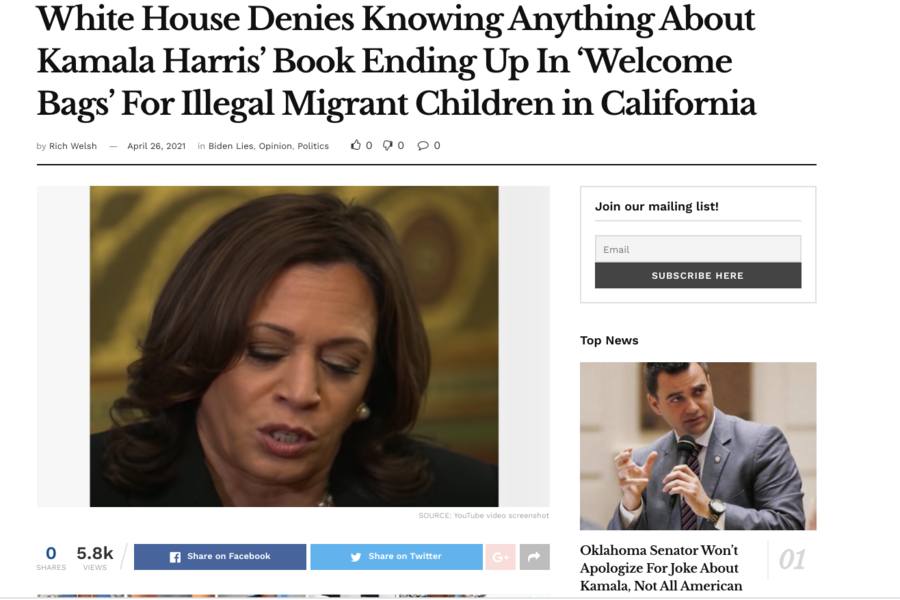 "It was a single book and was not part of a mass donation of that specific title," city of Long Beach spokesperson Kevin Lee told Lead Stories about the one copy of Vice President Harris' book, "Superheroes Are Everywhere," that was seen in a photograph taken at a shelter for migrant children in Long Beach, California.

Harris may not have made it to the border yet but her book has already made it there to be dropped into welcome bags that are given out to unaccompanied illegal border crossing migrant children at a Long Beach, California shelter where they are being held."

On April 27, 2021 Lee emailed Lead Stories and explained the situation:

The City of Long Beach, in partnership with the Long Beach Convention and Visitors Bureau, has a citywide book and toy drive that is ongoing to support the migrant children who are temporarily staying in Long Beach at the U.S. Department of Health and Human Services shelter. The single book you reference is one of now thousands of various books that have already been donated. The book was not purchased by HHS or the City. It was a single book and was not part of a mass donation of that specific title.

The donated books are part of an inventory, or library if you will, at the shelter. They are not part of a set welcome kit, but rather, children will be able to pick and choose what they read from the available donated inventory. Being able to make individual and personal choices on what they read, what they play with, what they wear and the like, is so important during these very challenging times for the children."

The claim began in a New York Post front page headline "Kam On In" that accompanied an article on April 23, 2021.

Unaccompanied migrant kids brought from the U.S.-Mexico border to a new shelter in Long Beach, Calif., will be given a copy of her 2019 children's book, 'Superheroes are Everywhere,' in their welcome kits."

There was one photograph in the article of a copy of Harris' book in the shelter. 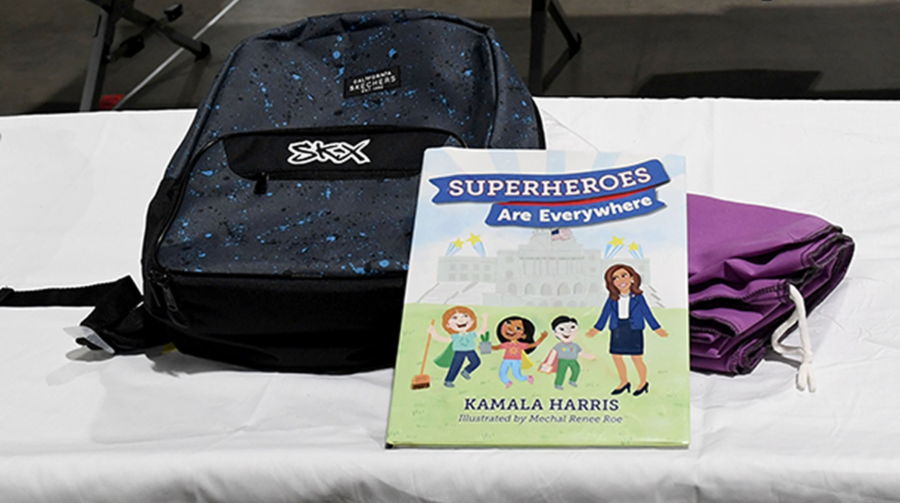 Fox News published a similar article on April 24, 2021, with the headline, "Kamala Harris isn't at the southern border -- but migrant kids are getting Veep's book," according to the archived version of the article on WayBackmachine.com. It read:

Unaccompanied migrant kids brought from the U.S.-Mexico border to a new shelter in Long Beach, Calif., will be given a copy of her 2019 children's book, "Superheroes are Everywhere," in their welcome kits."

Fox News updated its article on April 27, 2021 with the headline, "Kamala Harris' office stated ignorance of how her book was available for migrant kids at California shelter," to read:

At least one copy of Harris' children's book, "Superheroes Are Everywhere," was made available for migrant children arriving at the Long Beach Convention & Entertainment Center, a recently converted influx facility, along with basic hygiene supplies and clothing. The book was part of a citywide book and toy drive to support the migrant children staying there."

An editor's note on the story read:

EDITOR'S NOTE: In a previous version of this story, it was implied there were multiple copies of Harris' book available for children in welcome packs.

The New York Post reporter who wrote the article has resigned over the story. Laura Italiano tweeted about her resignation on April 27, 2021:

An announcement: Today I handed in my resignation to my editors at the New York Post.

The NY Post originally deleted the article but then reposted with an updated headline and an editor's note at the bottom of the article:

Editor's note: The original version of this article said migrant kids were getting Harris' book in a welcome kit, but has been updated to note that only one known copy of the book was given to a child."