Did a woman prove with a short video that the area where she received the Pfizer COVID-19 vaccine has become magnetic, or that she was microchipped? No, that's not true: The 20-second long video describes no methodology and does not offer convincing proof of anything. There are no microchips in any of the COVID-19 vaccines.

The claim appeared in several different videos posted on social media. One video (archived here) was published by missioninactionpodcast on May 10, 2021. The captions on the video read: 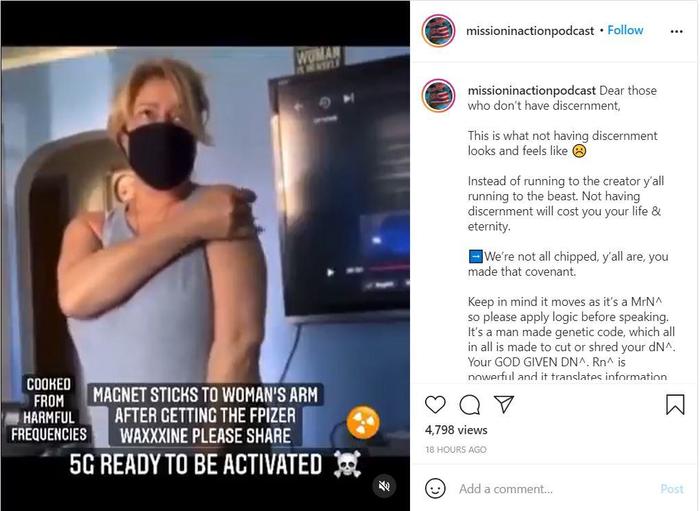 The caption written by missioninactionpodcast reads:

Dear those who don't have discernment,
This is what not having discernment looks and feels like ☹️
Instead of running to the creator y'all running to the beast. Not having discernment will cost you your life & eternity.
➡️We're not all chipped, y'all are, you made that covenant.
Keep in mind it moves as it's a MrN^ so please apply logic before speaking. It's a man made genetic code, which all in all is made to cut or shred your dN^. Your GOD GIVEN DN^. Rn^ is powerful and it translates information given to all of your cells and regulates the activity of ALL of your cells.
You see the complicated language and sneakiness satan uses to get you away from God?
Are you ready to wake up now? Bc it's kinda too late for many.
Go and refresh all over again in my Mark highlight.
Let those who have spiritual eyes see, and let him understand.
Love, those who are running after Christ and His word.

The woman doing the demonstration is wearing a face mask and a sleeveless top. She starts the demonstration by carefully positioning a small silver disc on her left upper arm. Then she gingerly moves her arm up and down as if to show how the "magnet" is stuck. She moves the "magnet" to the other arm to prove that it doesn't stick but does not carefully position the disc as she had before -- this time she seems to simply touch the disc to her arm before snatching it away and declaring that we're chipped:

And there it is.
(off camera voice says, "Come closer.")
Sticking to my arm. That's where I got the shot.
And here is the magnet on the arm where I didn't get the shot.
You go figure it out! We're chipped! We're all f----d.

Below is an assortment of screenshots showing similar videos made by other people, also purportedly demonstrating a magnet sticking to the site of their vaccine (here, here, and here). In all of these videos the position of the magnet appears to be in an area of the upper arm at a position where the skin's surface is less than vertical, 70° or 80°. The magnets -- if they even are magnets -- appear to be placed where they can stick to bare skin, and the angle of the tests is such that gravity does not cause the magnets to fall. None of this has anything to do with the vaccine other than the shoulder muscle being the place where vaccine injections are given. 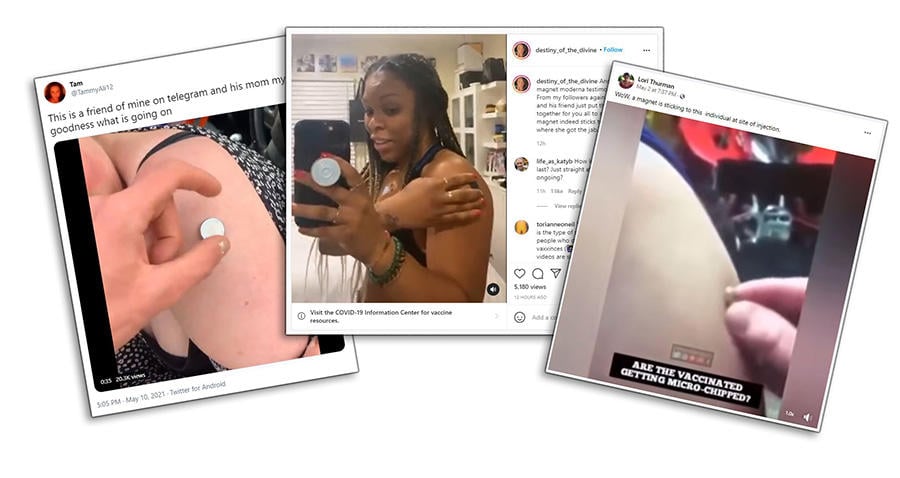 Other than the first video, these people do not make specific explanations about what it is that they claim is causing this magnetism. The woman in the first video says, "We're chipped," but this microchip claim is baseless. There are no microchips in the vaccines. Lead Stories has debunked several claims about microchips in the past. Another possible cause might be if there were a metallic ingredient in the vaccine -- but none of the COVID-19 vaccines, Pfizer, Moderna or Johnson & Johnson, have any metal ingredients.

In 2011 a doctor wrote up a case report about using an ordinary magnet to find a piece of metal which had somehow become embedded under his patient's skin. The article, published by Reuters with the title "Metal under the skin? Find it with a magnet: doctor" includes a dramatic photo of the magnet pulling at something under the skin. In contrast, the videos circulating on social media do not show anything of the sort, not even the slightest tug of resistance at the skin's surface.

The persistent conspiracy about microchips being surreptitiously added to vaccines defies logic and practical evidence.

RFID Microchips (radio-frequency identification) are a type of passive, unpowered, device. They can be used externally, as found in a security badge, or a cattle ear tag, and some are designed to be inserted under the skin. They can be read with a scanner at a very close proximity. These are commonly implanted in pets and livestock. Some people have also elected to have one implanted. A RFID chip is not delivered with a COVID-19 vaccine injection. These chips are typically sized 3 X 13 millimeters or 2 X 12 millimeters and are encased in glass.

To operate correctly, RFID tags must be inserted between the muscle and the skin in the fascia layer. The microchip injector is inserted at an angle in line with, and just under the skin. The device should be directly under the skin where a scanner can detect it. If a RFID chip has a ferrite rod coil, it is possible that a magnet could lightly stick to it through the skin. But COVID- 19 vaccine is injected into the muscle of the arm, with the syringe perpendicular to the skin, using a very fine needle through which a microchip would not pass. If a microchip were to be inserted into the arm muscle, it would be painful, it could migrate or be encapsulated with scar tissue and it would be useless because a scanner could not detect it.

Pfizer recommends that syringes with a very fine needle gauge are used to dispense each of the six doses of vaccine a vial contains. For reference, the outer diameter measurement of the recommended 22 - 25 gauge vaccine needles is 0.70 - 0.53 millimeters, many times smaller than the 2 or 3 millimeter RFID chips.

Below is a video of a person having one of the smaller - 2 X 12 millimeter - RFID chips injected under the skin of their hand with a very large gauge injector.