Did U.S. first lady Jill Biden have a medical license stripped from her by a medical board? No, that's not true: Biden is not a medical doctor and the publication that made the claim is a known satire website.

The claim appeared in an article (archived here) titled "Medical Review Board Revokes Jill Biden's License" that was posted on the website Potatriots Unite. It opened:

Dr. Jill Biden may want to stop calling herself "doctor." The former Second Lady and wife of Democrat nominee Joe Biden has been stripped of her license by the Medical Review Board. 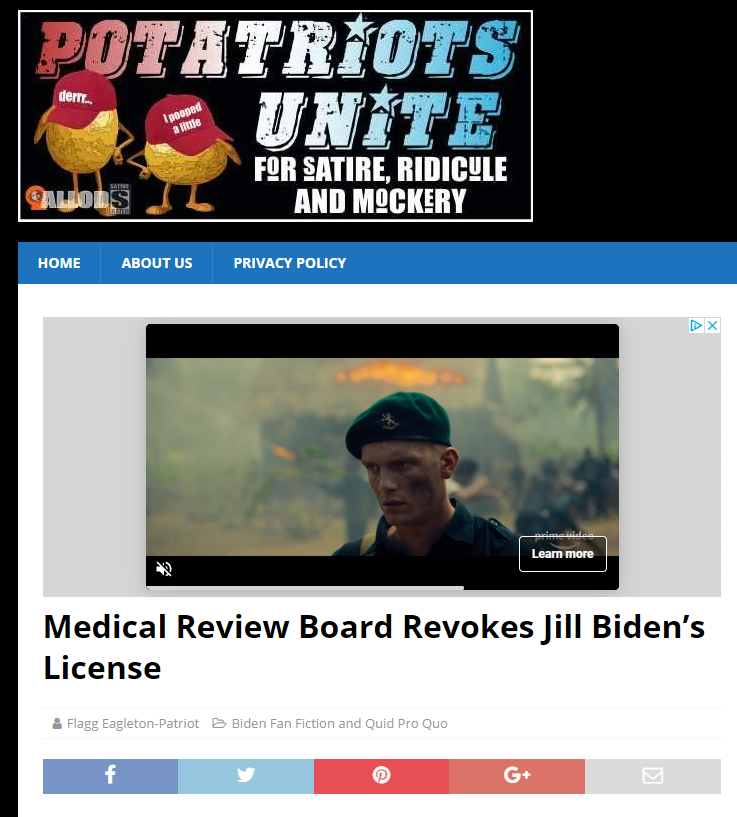 Articles from Blair's sites frequently get copied by "real" fake news sites that omit the satire disclaimer and other hints the stories are fake. One of the most persistent networks of such sites is run by a man from Pakistan named Kashif Shahzad Khokhar (aka "DashiKashi") who has spammed hundreds of such stolen stories into conservative and right-wing Facebook pages in order to profit from the ad revenue.

Just in case readers still did not realize that the Potatriots Unite article was satire, it ended by stating:

Further review of the story led us to the conclusion that Dr. Diden (sic) isn't a medical doctor at all and that it might be better if we decided not to publish such nonsense, but let's face it. The bulk of our readers stopped after the first quote in the story confirmed their bias, then they clicked one of the shiny ads.

The hyperlink attached to "The bulk of our readers" led readers to a Google search of the term "morons."

In December 2020, the Wall Street Journal ran an opinion piece by Joseph Epstein in which Epstein described Biden's use of the tern "Dr." before her name as feeling "fraudulent, even comic." Biden and her husband President Joe Biden appeared on The Late Show with Stephen Colbert on December 17, 2020, and discussed the piece. In the interview, Biden doubled down on her pride in her educational degree. The video of the Bidens' interview is below and Colbert's question about Biden's feelings regarding the opinion piece begins at the one minute and two-second mark:

Lead Stories has previously written about Biden's doctorate in education and her career in education.