Does the photo in this social media post show the first version of the Statue of Liberty, and was it sent back to France? No, neither is true: The photo is of a different statue, in the Caribbean nation of St. Martin. The first Statue of Liberty, sent to the United States in 1884 by France to celebrate the abolishment of slavery and the alliance of the two nations, still stands in New York.

The claim appeared in a Facebook post (archived here) on September 27, 2021, featuring an image of the statue of a woman holding up a lantern. The post starts:

The first statue of Liberty was # a Black woman!

The caption on the image reads:

The First Lady Liberty-gift from France. Sent back because she was black. 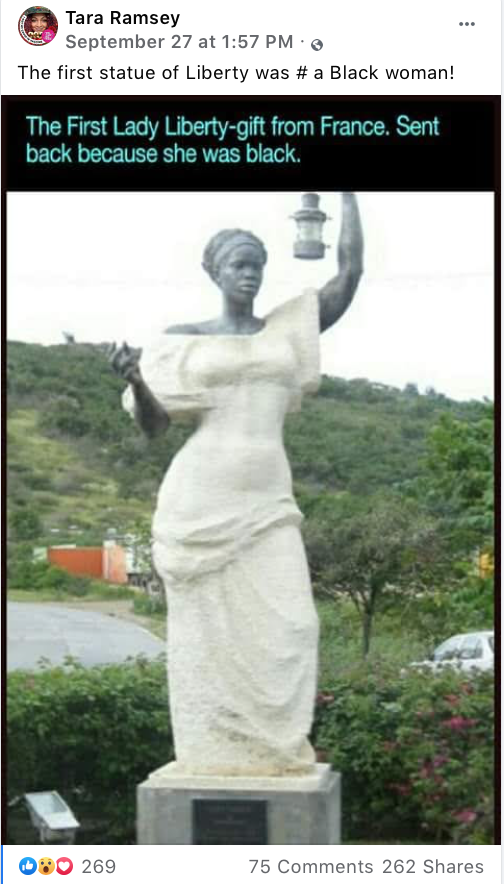 The sculpture in this post is no relation to the Statue of Liberty. A Google search using the keywords "Black Statue of Liberty" finds it is "Lady Liberty" by artist Theodore Bonev, installed in 2007 on St. Martin, a French- and Dutch-occupied island in the Caribbean.

The earlier Statue of Liberty was unveiled on October 28, 1886 and has remained on Liberty Island in New York Harbor ever since. A Google search on whether the statue was ever sent back to France found no such results.

Did initial drawings of the Statue of Liberty look like a black woman? An extensive report from the National Park Service (NPS) says a version of this rumor has circulated since 1998. It concludes that "aesthetic overlap between [sculptor Frédéric-Auguste] Bartholdi's Egyptian proposal and the Statue of Liberty project, and the preliminary nature of the statue's study models, makes it impossible to rule out an 1870-71 Liberty model that has design origins in Bartholdi's drawings of black Egyptian women in 1856."

In June 2021, France gave the U.S. the Statue of Liberty's 'Little Sister,' a smaller but otherwise exact replica.

Lead Stories reached out to The Statue of Liberty -- Ellis Island Foundation about the model for the statue. This article will be updated if a response is received.