Did the Supreme Court in the U.S. rule that the COVID-19 "pathogen is not a vaccine", is unsafe and "must be avoided at all costs," and has the court canceled "the universal vax"? No, that's not true: The United States Supreme Court has not issued a ruling regarding COVID-19 vaccines, according to the court's published opinions.

The claim appeared as an article (archived here) published by Best News Here on October 9, 2021, under the title "BREAKING NEWS: The Supreme Court In The US Has Ruled That The Covid Pathogen Is Not A Vaccine, Is Unsafe, And Must Be Avoided At All Costs-Supreme Court has canceled universal vax". It opened:

Please ALERT everyone in the family, friends and relatives!

Readers saw this title on the webiste: 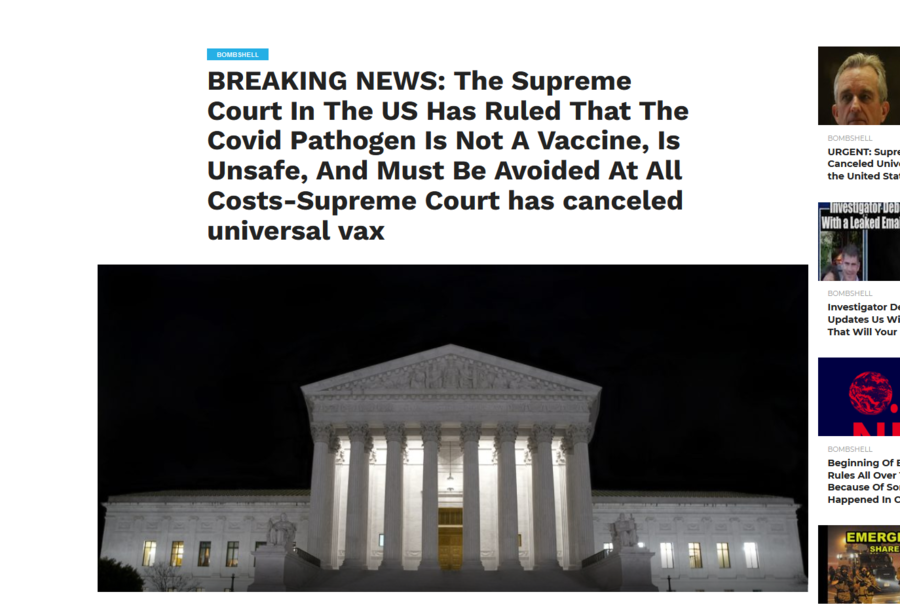 The lawsuit was filed by a group of scientists led by Senator Kennedy. Robert F. Kennedy Jr.: "The new COVID vaccine should be avoided at all costs. I urgently draw your attention to important issues related to the next vaccination against Covid-19. For the first time in the history of vaccination, the so-called mRNA vaccines of the latest generation directly interfere with the patient's genetic material and therefore alter the individual genetic material, which is genetic manipulation, which was already prohibited and was previously considered a crime."

The claim that the Supreme Court is ruling on the COVID-19 pathogen not being a vaccine is nonsensical. "A pathogen is an organism that causes disease," according to Healthline.com and the CDC. Therefore, a pathogen, which SARS-CoV-2 is, is NOT a vaccine by the very definition of a pathogen.

Robert F. Kennedy Jr., an outspoken anti-vaccine advocate who has been banned from Instagram for posting false COVID-19 information, has denied that he filed the purported lawsuit referenced in the story. He told The Associated Press:

The article about the Supreme Court is misinformation. The quote is fabricated. Clearly somebody made it up and is promoting it because the same quote keeps coming back no matter how many times I deny it. The same article keeps reappearing.

Lead Stories has reached out to Kennedy's office for further comment, and will update this story if a response is received.