Did the U.S. Navy Judge Advocate General's Corps convict Hunter Biden, son of President Joe Biden, of sexual assault against six women and then sentence to him to death for said crimes? No, that's not true: An on-duty public information officer at the Pentagon told Lead Stories that this claim was "Completely false." This claim was made on a self-described satirical website that publishes articles like this one for "entertainment purposes."

The U.S. Navy Judge Advocate General's Corps on Wednesday convicted and sentenced Hunter Biden to death after 6 women appeared via ZOOM to testify how Biden and his handlers had lured them into no-escape situations where they were drugged, raped, and threatened to remain silent "or else." 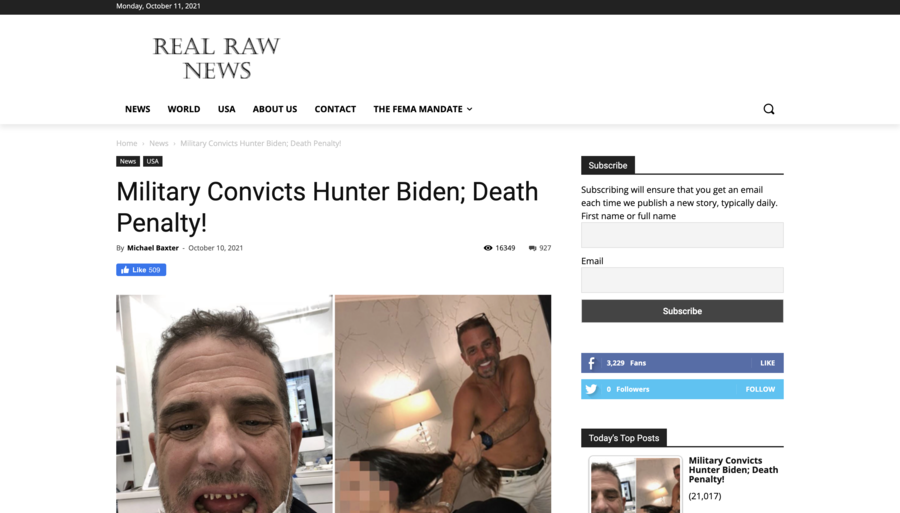 The article continued, "The first, a woman identified only as 'Ashley,' recounted a disturbing tale...'My parents were political donors and got invites to events. That man...Hunter Biden was at one of them. I was with my parents and their friends when he came over to say hello. He gave off creepy vibes to me right away...I was about to excuse myself to grab a soda when Hunter said he'd get it for me. I started to say 'no thank you,' but he was already walking toward the bar...or whatever it was. As he handed me the drink, he brushed a finger over mine and it sent chills down my spine. I shouldn't have drank the drink. I felt lightheaded and my legs felt rubbery. Everything went blurry. And next thing I know he is holding my hand, leading me up a staircase.'"

In an October 12, 2021, email from an on-duty officer at the Pentagon to Lead Stories, the Hunter Biden claim was categorized as, "Completely false." The Pentagon has previously pointed out to Lead Stories that military tribunals have no jurisdiction over U.S. civilians.