Does a short clip taken from a press conference by the New South Wales Ministry of Health to update the public on COVID-19 tell the whole story of recent deaths there? No, that's missing crucial context: Dr. Marianne Gale, the deputy chief health officer of New South Wales (NSW), did not say, "The vaccinated are dying in Australia from COVID". While her public statement revealed that six of the seven people who had recently died of COVID-19 in NSW were vaccinated, the clip used with this podcast video left out the overall rate of vaccination in New South Wales, and the recency of some of the deceased's vaccinations and detailed numbers on vaccination and hospitalizations, which are consistent with a successful vaccination program, in which breakthrough infections naturally occur.

The original press conference was broadcast live on Facebook on September 27, 2021. A small portion of the announcement was clipped and used in a video published by The Hodgetwins on October 7, 2021. It was captioned and titled:

The Vaccinated Are Dying In Australia From 'COVID'

The video posted by the Hodgetwins, bracketed by bold type that reads, "'THE VACCINATED' ARE DYING IN AUSTRALIA FROM COVID," only contains about 40 seconds of Gale's remarks starting at the 2:13 mark. At 2:52 one of the hosts of Hodgetwins can be heard abruptly saying, "All right cut her off."

Before detailing deaths, Gale had congratulated people for getting vaccinated and urged those who hadn't to do so as soon as they could. She also urged people to come forward for testing if they had any symptoms.

The reported vaccination rate for New South Wales was announced earlier in the press conference by Brad Hazzard, minister for health and medical research. He thanked the community and said that 85.7% of the population over 16 had had their first dose of the vaccine and 60.4% were fully vaccinated.

Embedded below is a copy of the 45-minute-long update from the NSW Ministry of Health, posted on YouTube by 7News Australia. Gale addressed the press for about six minutes. The video below is cued to begin at the 6:18 mark.

This information below (7:52 in the video),about the number of hospitalizations, was not included in the Hodgetwins video.

Currently in hospital we have 1,155 COVID-19 cases admitted
213 people are in intensive care, of whom 113 are requiring ventilation.
Of the 213 people in ICU -- 160 are not vaccinated, 45 have received one dose of the COVID vaccine, and eight people have received two doses of the COVID-19 vaccine.

Below is a chart depicting the 85.7% vaccination rate in NSW as it was on September 27, 2021, with blue representing people who have not been vaccinated. For comparison, another chart shows the proportions of the COVID patients in the ICU as reported at the press conference. (Current NSW vaccine information here) 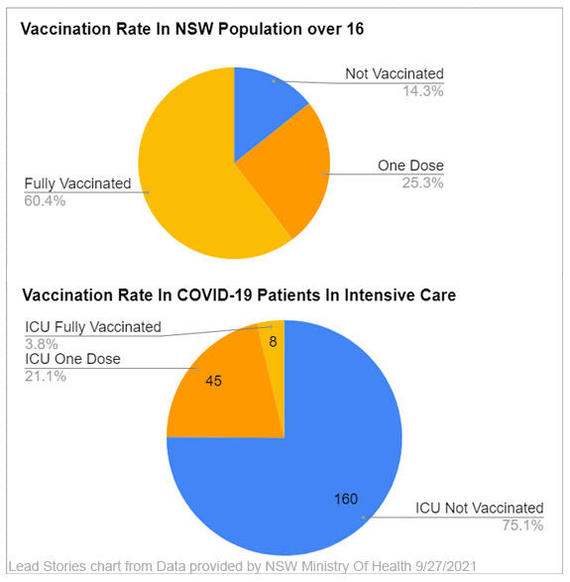 The Hodgetwins edit only included the part of Gale's announcement relaying the news of seven deaths:

As the minister said, tragically today we announce the deaths of seven people who have lost their lives to COVID-19: four women and three men.
One person was in their 40s, one person in their 50s, two people in their 70s, two people in their 80s and one person who was in their 90s.
All of those individuals had underlying health conditions.
One person was not vaccinated, three people had received one dose, and three people had received two doses of the COVID vaccine.

Gale's announcement, which was abruptly cut off in the Hodgetwins video, continued:

And we do know that a number of those individuals who were vaccinated, unfortunately had just received their COVID-19 vaccination not long before acquiring their illness. So we know in a number of cases unfortunately the vaccine didn't have enough time to provide the protection that we would have wanted.

The Hodgetwins make jokes about the two doses of the vaccine at the 3:50 mark in their video:

"I don't get that, if you getting vaccinated, why do they have to break it up in two shots?"

"Maybe if they give you one big shot -- BOOM -- Your heart explodes!"

The Centers for Disease Control and Prevention explains the way the mRNA vaccines work and why it takes time after receiving a vaccine for the body's immune system to mount a response:

After listing where the people who had died were from, Gale goes into more detail, explaining:

An October 7, 2021, report in australianseniorsnews.com says that a fourth Campbelltown Hospital patient who contracted COVID at the hospital has died. There has been a problem with COVID outbreaks in public hospitals in NSW. An August 24, 2021, article on abc.net.au titled, "Families speak out over COVID-19 outbreaks in New South Wales hospitals" reports the statistics at the time:

Twenty per cent of COVID-related deaths in NSW this year have occurred due to outbreaks in public hospitals, amid growing concerns of serious flaws in the state's hospital system.

Seventy-five people across NSW have died since the beginning of the Delta outbreak, according to the latest health department statistics. Sixteen of those people who died were patients who acquired COVID-19 during their hospitalisation.