Does drinking out of a water bottle that's been left in a hot car give people breast cancer due to dioxin exposure? No, that's not true: Dioxins can give people cancer, but dioxin is not found in the plastics used to bottle water, be they hot or cold. BPA, which is found in the plastic of water bottles, may be harmful to the human body, although the Food & Drug Administration has not agreed with scientists who have declared it a risk. 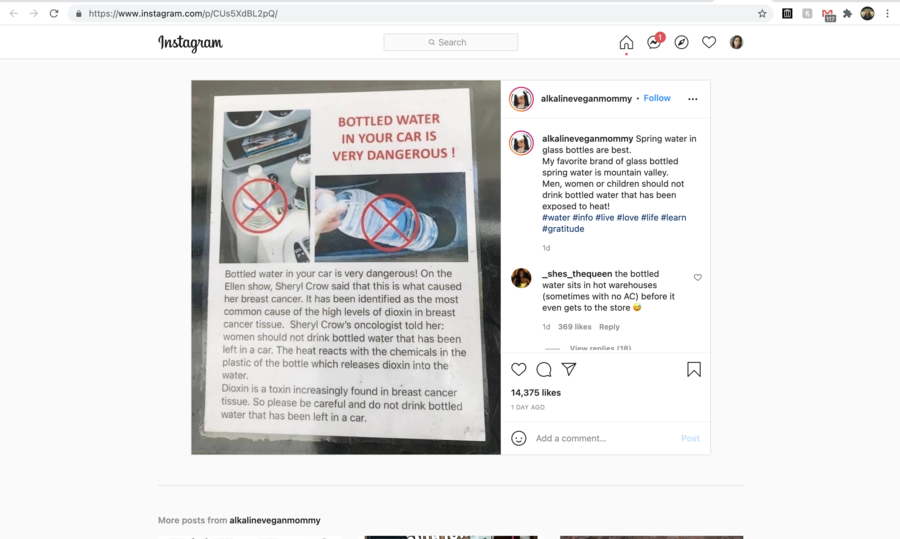 Dioxins are defined as a group of "chemically-related compounds that are persistent environmental pollutants (POPs)," by the World Health Organization (WHO). While highly toxic and capable of causing cancer, they are so omnipresent that "all people have background exposure, which is not expected to affect human health," WHO says.

BPA, which is in plastic water bottles, can mimic estrogen, leading to cell proliferation, which contributes to cancer development and progression, according to a 2015 paper in the journal Medicine, titled, "Bisphenol A and Hormone-Associated Cancers: Current Progress and Perspectives." The article explores BPA's role in breast, ovary and prostate cancer.

The journal Environmental Science and Pollution Research published a review of research about BPA in March 2021: "It enters the human body via oral, inhaled, and dermal routes as leach-out products. BPA may be anticipated as a probable human carcinogen."

The FDA's website does not contain any agency declarations of BPA risk, based on its presence in water bottles.

Rolf Halden, director of the Center for Environmental Health Engineering at Arizona State University, said in 2004 that there are no dioxins in plastics but that there's a different concern about hot plastic bottles holding water:

There is another group of chemicals, called phthalates that are sometimes added to plastics to make them flexible and less brittle. Phthalates are environmental contaminants that can exhibit hormone-like behavior by acting as endocrine disruptors in humans and animals. If you heat up plastics, you could increase the leaching of phthalates from the containers into water and food.

The Breast Cancer Research Foundation wrote in an October 8, 2021, email that, "While we can't confirm if this claim is specifically true for causing breast cancer, drinking water from old plastic bottles, particularly after they may have been sitting in a hot car, is not good for your health in general due to the chemicals that leach into the water."

We have contacted Halden to see if his response needs to be updated and will add to this story if appropriate.