Does the grid pattern on a seismic activity map indicate the La Palma volcanic eruption and earthquakes are an artificial attack? No, that's not true: The grid effect which appears on the European-Mediterranean Seismological Centre (ESMC) map, showing the seismic activity on the island of La Palma is not the result of a pattern on the ground, but is due to the global earthquake mapping center only extending the longitude and latitude coordinates for two decimal degrees. This level of detail is sufficient on a global map. The regional earthquake map of La Palma -- in Spain's Canary Islands off the northwest coast of Africa -- provided by the Spanish National Geographic Institute carries the coordinates to four decimal degrees and on that map there is no apparent grid pattern in the local seismic activity at this scale.

The question about the grid pattern on the ESMC map has been highlighted by many channels. Some inquiries are simply curious and others are hyping disinformation. One example of the latter is an article published by halturnerradioshow.com on October 22, 2021, titled "BULLETIN: EVIDENCE THAT LAPALMA ERUPTION & EARTHQUAKES ARE ARTIFICIAL ATTACK!" (archived here) which opened:

UPDATED 1:53 PM EDT - SEE BOTTOM -- The volcanic eruption which began on the Island of LaPalma in the Canary Islands, Atlantic Ocean, off the northwest coast of Africa seems to be getting some help: artificial help to make it WORSE! Evidence below:

When the Cumbre Viejo volcano on La Palma began erupting on September 10, it immediately became the focus of intense attention because that island is the only place in the world which can generate a Tsunami wave, which is capable of literally destroying the entire east coast of North America.

Below is a comparison image showing the grid pattern which appears on the EMSC map shared in the Hal Turner article. This map has the longitude and latitude coordinates for two decimal degrees. The map from the Spanish Instituto Geográfico Nacional shows seismic activity plotted with coordinates detailing the location down to four decimal degrees. 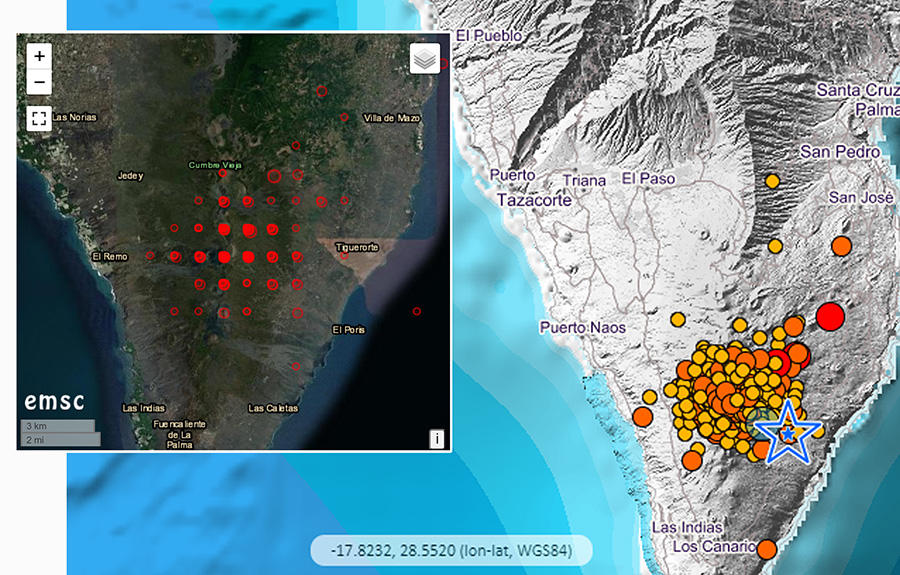 On October 23, 2021, @bowler_organics posted a tweet addressing concerns similar to those raised in this Hal Turner article. He wrote:

1. Some are reporting #LaPalma island is being manipulated unnaturally in order to trigger a #Landslide leading to a #Tsunami. The evidence, allegedly, lies within the @LastQuake earthquake map. I have my doubts

He went on to explain that the granularity of the mapping was dependent on how detailed the coordinates were by their decimal points. The verified Twitter account of EMSC replied to him:

.@bowler_organics Thank you for raising this point! And YES you are right, and as you clearly show, our location are up to 2 digits and that's the reason of the gridding effect! We provide data at global scale, where indeed 2 digits are generally enough 1/n

In the following thread EMSC also included an October 22, 2021, tweet from the verified account of @USGSVolcanoes which was addressing the question of whether a large slide at La Palma could trigger a tsunami that would reach the east coast of the United States. Their conclusion is, no. The tweet contains a link to a report released by the U.S. Geological Survey on October 21, 2021, titled, "Volcano Watch -- The Canary Islands 'mega-tsunami' hypothesis, and why it doesn't carry water."