Did Rep. Alexandria Ocasio-Cortez say "it is time to redefine 'natural food"? No, that's not true: This article is fake. The "Minneapolis Red-Star Tribune" does not exist, and there is no record of Ocasio-Cortez ever mentioning "cellular agriculture" when describing the Green New Deal. 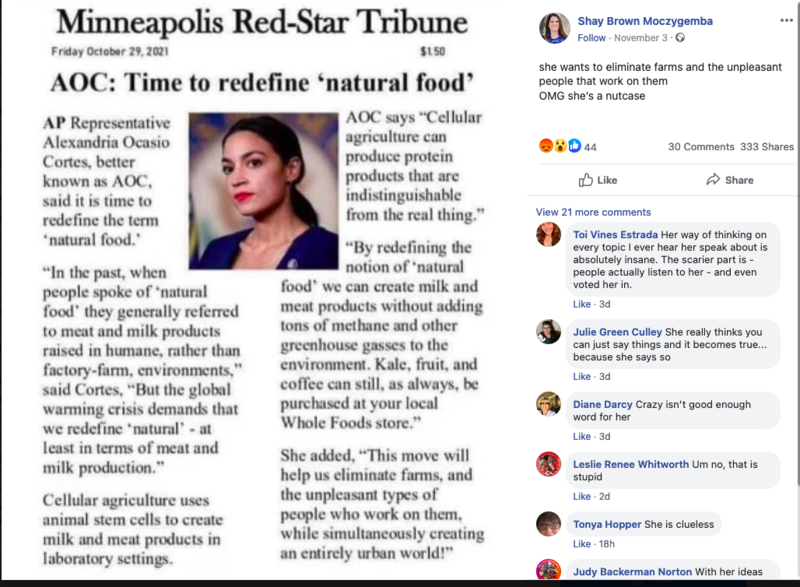 A Google search using the keywords "Minneapolis Red-Star Tribune" displayed no indication that the publication seen in the post exists.

A Google search using the keywords "Alexandria Ocasio-Cortez Cellular Agriculture" did not produce any results, suggesting that this article -- which misspells Ocasio-Cortez's name as "Cortes" -- is not real.

Lead Stories reached out to Ocasio-Cortez through her office and will update this story if a reply is received.

The Green New Deal platform seeks to transition America to 100% clean energy by 2030.

As described by Ocasio-Cortez at 0:11 in this October 14, 2020 video published on her YouTube channel, the Green New Deal is comprised of three main principles:

One: a ten year timeline for decarbonization.

Two: making sure that we are creating jobs in any climate legislation.

And three: that we are centering and focusing on disproportionately impacted communities.

However, she does not mention "cellular agriculture" or make the remarks attributed to her in the fabricated article. There is no publicly available record of Ocasio-Cortez stating any portion of this claim in any other interview either.

The claim made in this post seems to be a satirical spin on the controversy and confusion surrounding proposals in the Green New Deal from different sides of the political spectrum.

Jacobin Magazine, which is self-described as a "leading voice of the American left," published an August 11, 2019, article that boosts lab-made meat as a way to entice millions of Americans to get on board with the Green New Deal.

It also features a March 1, 2019, Washington Post article where criticism from the right includes former White House adviser Sebastian Gorka saying supporters of the New Green Deal are trying to "take away hamburgers."