Does the number of reported adverse reactions to COVID-19 vaccines in the United States equal half of all such reports for all vaccines over the last 30 years? Yes, that's true: Those numbers are found in the Vaccine Adverse Event Reporting System (VAERS), based on data through October 22, 2021. But the numbers don't tell the full story. The COVID vaccine rollout is considered the biggest and fastest in U.S. history and the first such mass vaccination program since VAERS was launched. The meaning of VAERS reports is unclear until they are verified. As the disclaimer for the VAERS website says, "The reports may contain information that is incomplete, inaccurate, coincidental, or unverifiable."

IN LESS THAN ONE YEAR, COVID 'VACCINE' REACTIONS ACCOUNT FOR 50% OF REPORTED ADVERSE VACCINE REACTIONS. EVER. 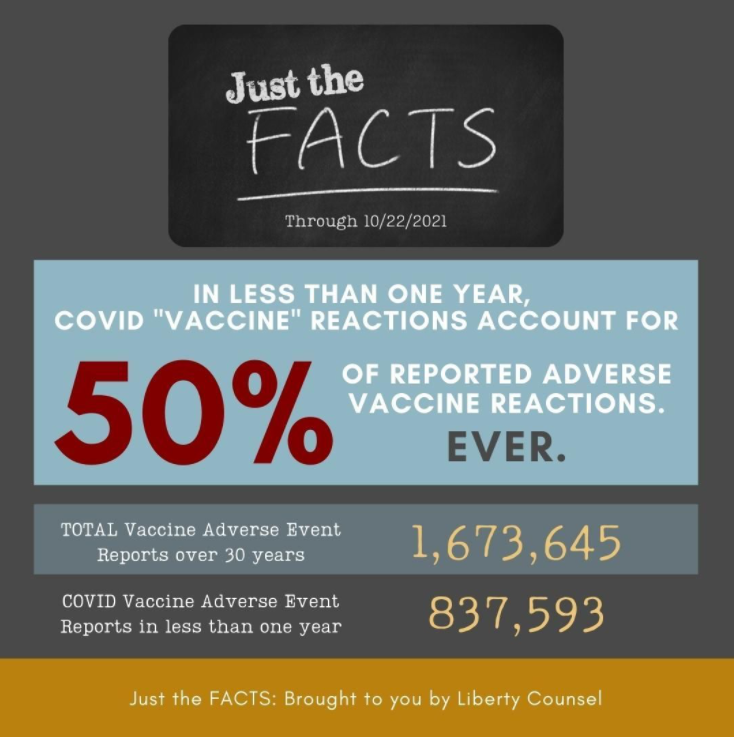 These numbers are from the VAERS database, run by the Centers for Disease Control and Prevention (CDC) and the Food and Drug Administration (FDA). While Lead Stories couldn't precisely match the figures cited by Liberty Counsel, we came up with very similar numbers on November 4, 2021.

VAERS data ... are updated every Friday. Hence, results for the same query can change from week to week.

The number of VAERS reports would logically correspond to the size of each vaccination campaign.

So far, the COVID-19 vaccines are the fastest vaccines ever created. The virus was discovered and a vaccine was developed and tested within 12 months, UCLA Health reported. More than 426 million doses had been administered as of November 4, 2021.

The next fastest vaccine rollout was for mumps, 60 years earlier. From development to deployment, it took about four years, but the number of doses in the U.S. in the years since is dwarfed by COVID. The National Health Service in the United Kingdom estimated that by 2003 about 500 million doses of the MumpsMeaslesRubella vaccine had been delivered worldwide, only about 12 million per year worldwide.

The other factor likely to have affected VAERS reporting is the internet. When VAERS was launched in 1990, Tim Berners-Lee's World Wide Web had few users and reports were filed on paper. VAERS reports can now be filed by anyone with internet access, estimated at 93% of the U.S. population.

The list itself cannot be used to prove or quantify, since all it shows is a chronological correlation, not the causal link that would be more difficult to establish. It's the equivalent of a police precinct's running "blotter" of reports that may serve as a starting point for police work, not an end point.

Liberty Counsel is a 501(c)(3) tax-exempt nonprofit organization that has close ties to Liberty University. Its website has a page on "legal help for religious exemptions from vaccinations." It includes a vaccine exemption guide and a sample letter on how to ask an employer for a religious exemption.

And Mat Staver, founder and chairman of Liberty Counsel, is featured in a video discussing "COVID shot exemptions, vaccine passports, and religious freedom."