Does a photo show that archeologists have uncovered the skeleton of a giant? No, that's not true: This picture was created in 2011 for a Worth1000.com Photoshop hoax contest called "Size Matters 4," which had a size-altering but photorealistic theme. This entry was made by the designer posting as Whitmath57.

The Photoshop hoax contest was held on August 14, 2011. At the time the contest platform was called Worth1000.com but it is now part of the DesignCrowd.com community. The contest entry has since been circulated as an actual hoax beyond the context of the contest. One example is a post published in the Facebook group "NASA, UNIVERSE, UFO ALIENS AND SPACE." on December 11, 2021, with the caption: 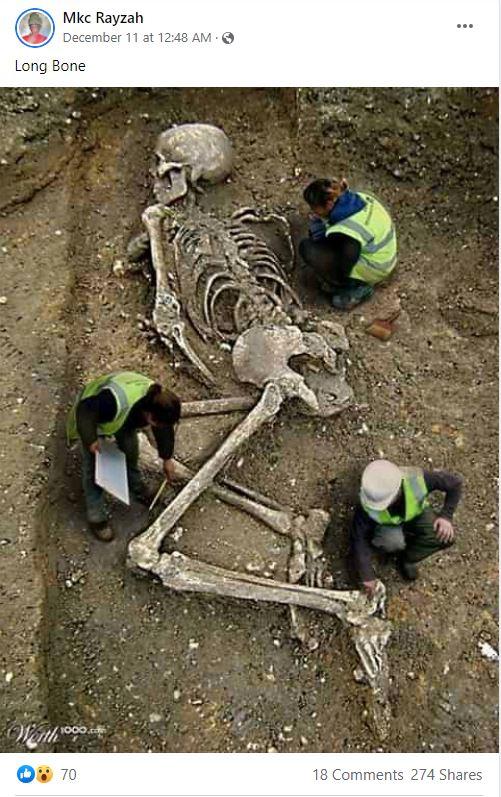 The image posted to Facebook has a Worth1000.com watermark in the lower left corner. The original Worth1000 design platform became designcrowd.com in 2014 and all of the images and records of past photoshop contests were preserved on the new website. The Photoshop contest entry by Whitmath57 can be found on designcrowd.com. A June 9, 2016, blog post explains the changes:

If you're looking for Worth's amazing creative content, then you've rocked up to the right place!

Just in case you missed the news, Worth1000.com is now part of DesignCrowd.com and BrandCrowd - and we've preserved all the amazing Worth1000 content here so you can search the archives to find old favorites and new contest art.

We're delighted to have Worth1000's talented users and their treasure trove of imaginative and original content, built over many years, as part of our design community.

The designers entering the original contest "Size Matters 4" were given this task:

In this contest, your task is to change the size of something (or things) in your image, in a way that is extraordinary, but not impossible.

Think an over sized camera, an orca whale creating a tidal wave endangering an oceanside city. The trick in making a successful hoax is believability, so don't over do it.

For good measure, consider adding a synopsis story about your hoax to your author comments (i.e. "this wasp was found in a nest a mile away from a nuclear reactor"), as your image will likely be seen by many people around the web.

A May 27, 2016, DesignCrowd blog article titled, "Giant Skeletons Seem Too Real To Be A Hoax" features a collection of additional Photoshopped giant skeletons from the DesignCrowd community. Lead Stories has also debunked other giant skeleton hoax photos (here and here).