Does a video show China's "Artificial Sun" rising to break a record for heating a loop of plasma and holding a temperature of 126 million degrees for 17 minutes? No, that's not true: This video shows a rocket launch and is unrelated to the caption. Although the caption may sound unbelievable, a new world record of 1,056 seconds, more than 10 times the previous record of 101 seconds, was set by the EAST superconducting tokamak nuclear fusion reactor on December 30, 2021. This took place inside a nuclear fusion reactor on the ground in Hefei, Anhui Province, in eastern China. The "artificial sun" is a nickname for the reactor, not something launched into space.

Viral posts on several platforms have repeated this false claim since at least September 2021. Some use a video of earlier rocket launches or a video of a December 23, 2021, launch by China. One example of a miscaptioned video was published on January 7, 2022, in an Instagram post by that_spiritual_guy. It was captioned:

"artificial sun" has set a new world record after superheating a loop of plasma to temperatures five times hotter than the sun for more than 17 minutes. it reaches temperatures of around 126 million°

why would y'all think this is the first time we've seen a fake sun or moon in our sky? they clearly have the tech. this is the truman show. !!
#eyedontmiss

The caption within the video read:

CHINA'S "FAKE SUN" RAN IN THE SKY FOR 17 MINS
WHY AREN'T MORE PEOPLE TALKING ABOUT THIS? 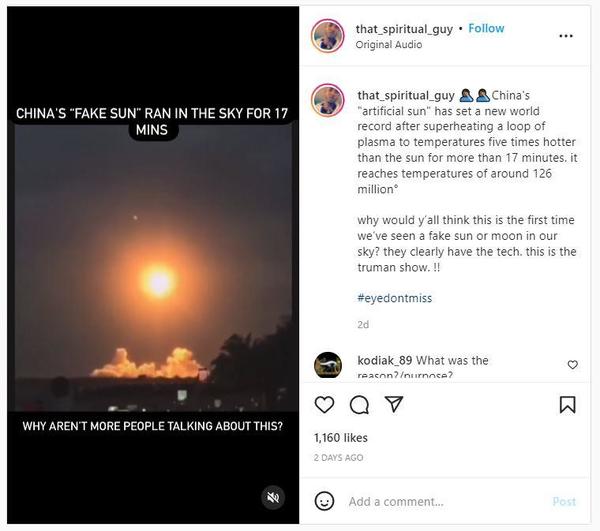 A January 10, 2022, comment left on Twitter from @mrchan to @Hoaxeye shared a link to a dated and captioned video of this rocket launch taken from the same beach, but a slightly different vantage point. The 39-second-long video posted on weibo.cn on December 24, 2021 (pictured below), follows the rocket until it disappears above the clouds. A flag being waved by one of the spectators is visible in both the videos. This has been identified as the Chang Zeng 7A rocket that was launched December 23, 2021, from the Wenchang launch site at 10:12 UTC -- 6:12 in the evening local time. A space flight news website reported the rocket was carrying two satellites. 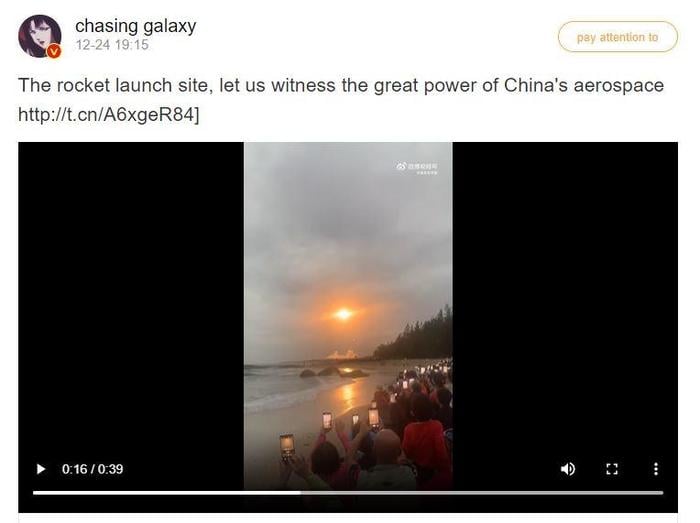 EAST already scored a previous record in May, running for 101 seconds at a temperature of 120 million degrees Celsius.

On January 10, 2022, smithsonianmag.com published an article titled, "China's Artificial Sun Just Broke a Record for Longest Sustained Nuclear Fusion." This article contains an additional photo of the EAST reactor inside a concrete building. This is not something that launches into the sky.

An article on nuclear.duke-energy.com explains the difference between fission and fusion:

The foundation of nuclear energy is harnessing the power of atoms. Both fission and fusion are nuclear processes by which atoms are altered to create energy, but what is the difference between the two? Simply put, fission is the division of one atom into two, and fusion is the combination of two lighter atoms into a larger one. They are opposing processes, and therefore very different.