Are schools in Florida "forcing" students to stand during the national anthem? No, that's not true: At least one county (Orange County) has explicitly said that students can opt out from standing during the anthem with parental consent as well as during the daily Pledge of Allegiance recitation, according to a First Amendment specialist at the Freedom Forum Institute.

The claim appeared in a Facebook post (archived here) published on May 10, 2019. The image in the post featured children standing with their hands over their hearts. The text reads:

FLORIDA SCHOOLS ARE FORCING STUDENTS TO STAND DURING NATIONAL ANTHEM 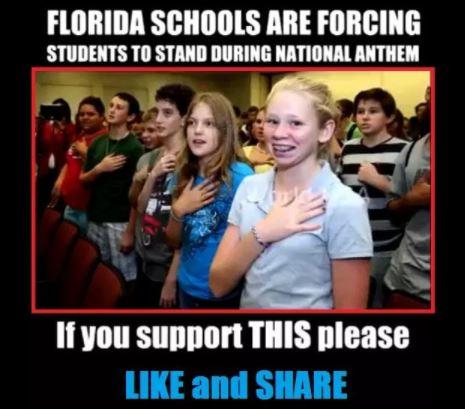 While the post refers to the national anthem, it is the spoken Pledge of Allegiance that Florida law requires to be "recited at the beginning of the day in each public elementary, middle, and high school in the state." This fact check examines that issue as well.

Kevin Goldberg of the Freedom Forum Institute told Lead Stories the emphasis on group participation to stand for the national anthem is a form of coercion, but "students are not literally 'forced' to stand due to exceptions provided by the First Amendment and in the Florida statute."

He also expanded upon his platform's article, titled "CAN STUDENTS BE FORCED TO STAND WHILE OTHER STUDENTS RECITE THE PLEDGE?" in a February 16, 2022, email:

If the school district/school/teacher says that students may opt-out of the anthem -- either with or without parental consent -- the claim is inaccurate, as students are not 'forced' to stand; if the student is not given the option to opt out, then that student's constitutional rights are being violated because they are being forced to stand even if it conflicts with their beliefs. In either instance, the connotation that Florida is uniquely authoritarian is inaccurate.

When it comes to the process for opting out, as about 2/3 of the states allow the student to decide for themselves whereas about 1/3 -- including Florida -- require parental consent. And, while there are fewer laws regarding the national anthem, they do exist in many states around the country.

Lead Stories also reached out to the University of Miami School of Law. In an email response on February 15, 2022, Caroline Mala Corbin, who is a law professor specializing in the First Amendment, cited her technical law review, titled, "The Pledge of Allegiance Revisited: Speech Rights vs Parental Rights" and said:

As a matter of constitutional law, schools may not force public school students to participate in the pledge of allegiance.

This has been true since the Supreme Court decided West Virginia State Board of Education v. Barnette in 1943. In that case, the Supreme Court held that it violated the Free Speech Clause of the First Amendment to make public school students join the pledge. The Free Speech Clause protects both your right to speak, and your right to refrain from speaking, and students have the right not to be forced into repeating the government ideological messages.

Lead Stories reached out to the Florida Department of Education and will update this story if a response is received.