Can a gas station be cited for vandalism if stickers are put on the gas pump? No, that's not true: A claim that putting stickers on the gas pump would hold the owners responsible is false, according to the sheriff where the claim was made. "I've never heard of anything like this," Marion County, West Virginia, Sheriff Department Chief Deputy Jason Bearden said.

I saw a sticker like this one on a gas pump in Kingmont. 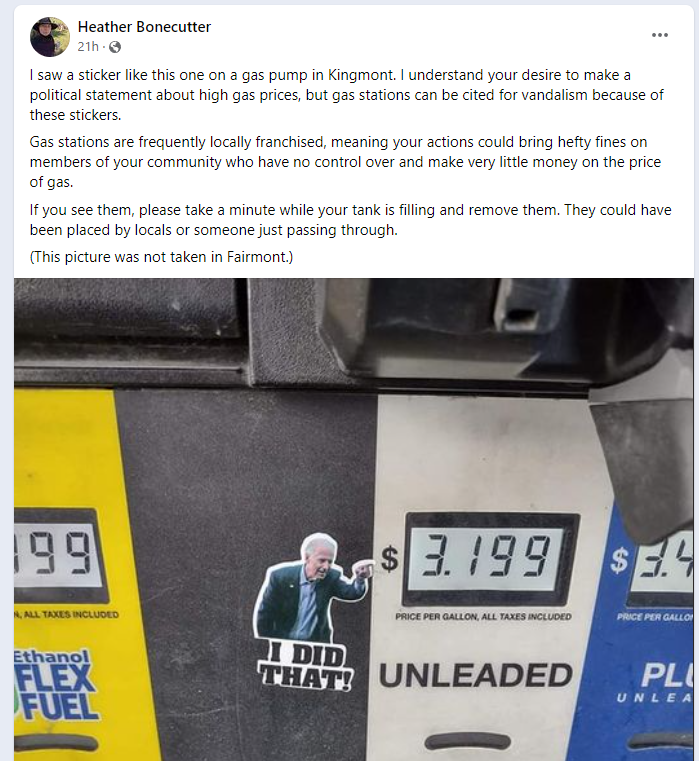 The post showed a sticker on a gas pump of a cutout of President Joe Biden with the words "I did that" underneath the image, which was placed so that Biden was pointing at the high price of $3.199 per gallon for gas. The whole post read:

I saw a sticker like this one on a gas pump in Kingmont. I understand your desire to make a political statement about high gas prices, but gas stations can be cited for vandalism because of these stickers.
Gas stations are frequently locally franchised, meaning your actions could bring hefty fines on members of your community who have no control over and make very little money on the price of gas.
If you see them, please take a minute while your tank is filling and remove them. They could have been placed by locals or someone just passing through.
(This picture was not taken in Fairmont.)

Chief Deputy Bearden, who spoke to Lead Stories by phone on February 17, 2022, said he was not aware of any citations that had ever been issued to a gas station for vandalism. He explained the gas stations would not be held liable for such stickers on the pump:

I don't see how they would be responsible for that. It would be the person that put the sticker on there.

Although the post uses "citation", the standard criminal court term for a low-level charge, Lead Stories has checked to see some gas station franchisors can, by contract, penalize franchisees for not cleaning up graffiti and stickers. We will update update this fact check when we hear back from an expert on franchise gas station operations.