Is this an authentic photo of Steve Bannon? No, that's not true: This photo has been altered. The original photo was taken by photographer Mark Wilson for Getty Images on April 20, 2017. The photo has been edited to change the overall contrast and color saturation to add blemishes, bloody mouth and stained shirt.

The image search engine TinEye shows early copies of the altered image were published in 2017 by the satire website theonion.com. The altered photo has resurfaced from time to time, recently in a tweet (archived here) published by Jon Cooper, a New York state Democrat who was involved in the presidential efforts of both Barack Obama and Joe Biden, on February 7, 2022. The tweet opened: 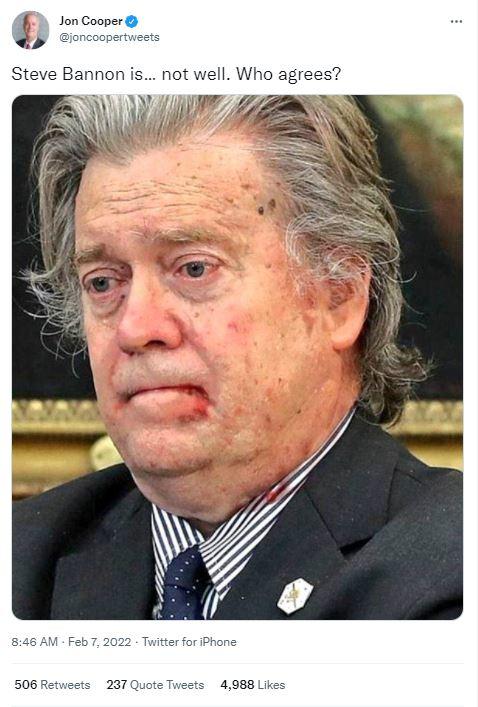 The original photo by Mark Wilson can be viewed on gettyimages.com. It is captioned:

Although the TinEye crawler first encountered the altered image on the satire website theonion.com in August 2017, most of those early links return a 404 error or the image doesn't load. TheOnion.com used the altered image again in an August 20, 2020, slideshow titled, "The Onion Remembers Steve Bannon, Trump's Most Encrusted Advisor." In the screenshot below showing TinEye.com search results, the top thumbnail, also a broken link, is a cropped version of the original photo, and the lower thumbnail is the altered image.