Do COVID-19 booster shots cause rapid cancer growth? No, that's not true: Michel Goldman, one of the authors of a paper misused on social media to make the claim, told Lead Stories in a March 21, 2022, email, "This is an abusive and unacceptable interpretation." The paper cited illustrates a single case of a 66-year-old man who had already been diagnosed with a "rare, often but not always, aggressive (fast-growing) form" of lymphoma, which scans showed had progressed quickly over the course of 22 days. During this timeframe, he got his third COVID shot. The single case in the paper produced no conclusion -- it was a set of observations based on cancer devlopment in the one patient.

The study cited in the Facebook post links to another social media post on Telegram, which cites a pre-print study published in the National Library of Medicine at the National Institutes of Health. The Telegram post appears below:

The study published on November 25, 2021, Rapid Progression of Angioimmunoblastic T Cell Lymphoma Following BNT162b2 mRNA Vaccine Booster Shot: A Case Report, has not yet been subjected to professional peer review. That's the customary process through which the methodology and conclusions in draft scholarly writings like this are challenged by professional peers, sometimes causing authors to restate their findings.

This is what the Lymphoma Research Foundation says about the disease:

Angioimmunoblastic T-cell lymphoma (AITL) is a rare, often but not always, aggressive (fast-growing) form of peripheral T-cell lymphoma (PTCL). While AITL only accounts for one to two percent of all NHL [non-Hodgkin lymphoma] cases in the United States, it is one of the more common subtypes of T-cell lymphomas. Elderly patients are more likely to be diagnosed with AITL.

Unlike the social media claims, the study's six authors aren't saying the Pfizer booster shot caused the cancer, only that it may have sped up its progression. In the medical imaging below, the 66-year-old man shown had already been diagnosed with AITL when the first scan (left) was taken on September 8, 2021. Twenty-two days later, the September 30, 2021, image shows his cancer had spread dramatically through his lymph system. The man received his booster shot eight days earlier on September 22, 2021. 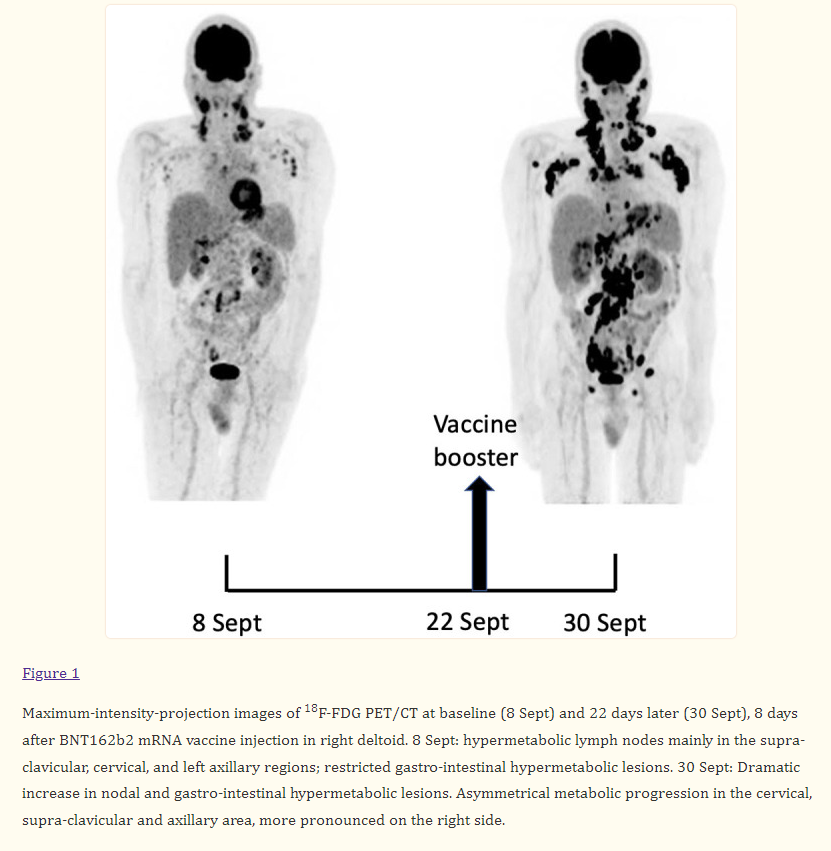 What the medical imaging doesn't tell us is how much the AITL had spread prior to the patient getting his vaccine booster shot, only how much it changed over the 22 days illustrated in the study. The authors said their findings shouldn't be used to come to general conclusions:

At this time, extrapolation of the findings of this case to other patients with AITL or other peripheral T cell lymphoma involving TFH cells is premature. AITL patients are rare and their mutation profile is heterogeneous. Furthermore, their immune reactions might be affected by their treatment. It is therefore unlikely that existing pharmacovigilance systems will be efficient to identify extremely rare cases like ours. ...

This observation ... suggests that vaccination with the BNT162b2 mRNA vaccine [Pfizer] might induce rapid progression of AITL. Dedicated studies are needed to determine whether this case can be extrapolated to populations of patients with AITL or other peripheral T cell lymphoma involving TFH cells.

A unique aspect of this study is that the patient highlighted in it is Goldman. The study includes the following:

The patient is the corresponding author of this case report. He hopes that this report will incentivize investigations to clarify the possible impact of anti-SARS-CoV-2 mRNA vaccination on the course of AITL. He remains convinced that mRNA vaccines represent very efficient products with a favorable benefit-risk ratio.