Is there a successful self-made billionaire prison investor offering tips and advice to Twitter followers about how to get rich buying private prisons? No, that's not verified: The @prisoninvestor1 account of "Dallas Liam" uses inflammatory tweets to get attention, but does not appear to be a verifiable real person who is investing in private prisons. There is also no record of "Prisons for America LLC," which Dallas Liam is purportedly the chairman of. The only results in online searches are mentions pointing back to the @prisoninvestor Twitter account.

This makes my blood boil, that smile I had in my last post is gone! I speak on this all the time yet we keep saying reform police, how about we throw away the WHOLE system and start over. The police are just the slave catchers...nothing has changed just been redesigned. @realnathandaley I'm ready to have that conversation.
When I say we are used as commodity and disposal...that's EXACTLY what I mean. 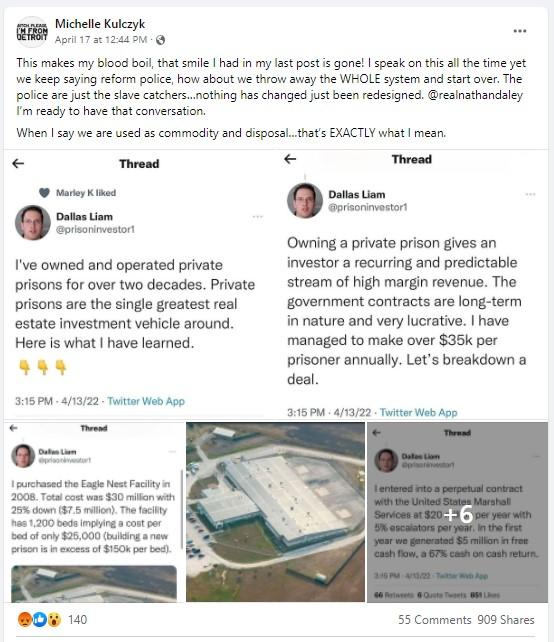 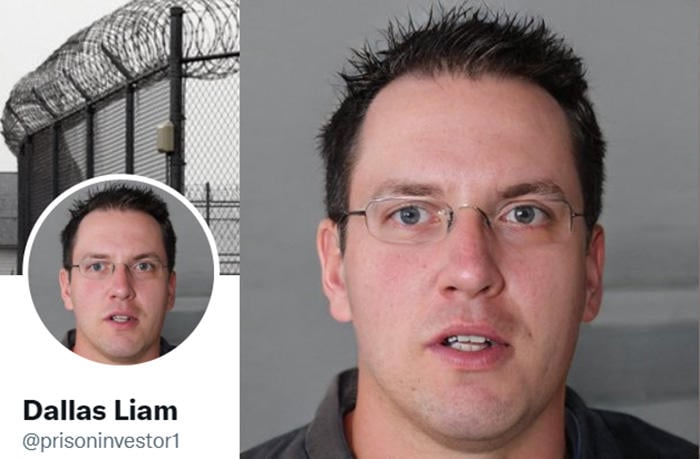 Previously the @prisoninvestor1 account (archived here on April 30, 2021) used a photo of Ryan Bundy, the son of rancher Cliven Bundy for a profile picture. The photo matches an image of Bundy used in a 2018 article in reviewjournal.com. At the time the @prisoninvestor1 tweets were archived in 2021, the account was posting tweets that were similar, if not identical, to the tweets being posted in 2022. The image below shows the identical tweet posted in April of 2021 and 2022. The thread from 2021 was featured in an April 29, 2021, article on thestonkmarket.com. 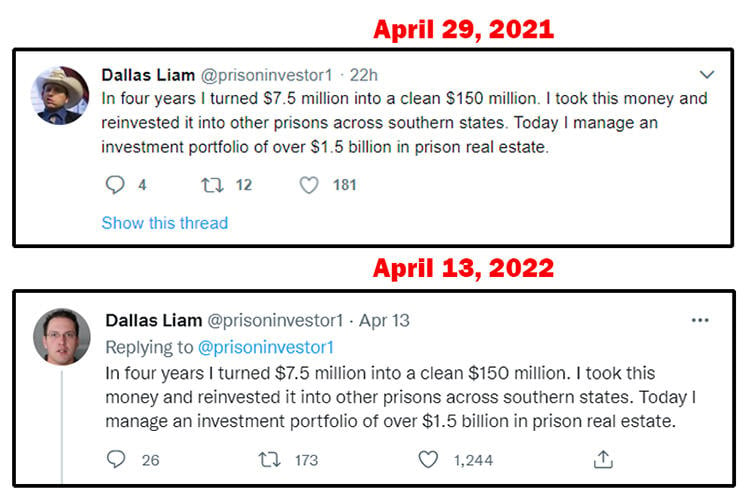 One of the tweets featured in the Facebook post mentioned above contains an image. A reverse image search identified this as the Karnes County Texas Detention Facility, as seen here on the website of The GEO Group, which bought the facility in January 1998. In the tweet with that photo, @prisoninvestor wrote that they purchased the Eagle Nest facility in 2008:

The Maverick County Detention Center in Eagle Pass, Texas was purchased by The GEO Group in 2017. It is located near the border with Mexico and is about three hours away from the Karnes County Detention Facility on the outskirts of San Antonio. But @prisoninvestor1 claimed in the tweet that they purchased the "Eagle Nest Facility," not Eagle Pass. A careful reading of the 2021 stonkmarket.com article shows the claimed purchase was of an Eagle Pass facility:

According to Dallas he purchased the Eagle Pass facility for only $25,000 per bed with a 25% down payment.

In an April 20, 2022, tweet (archived here) @prisoninvestor1 posted two images. Lead Stories used Google's reverse image search to identify them. The photo of the house on the left appears in the Library of Congress photo collection, captioned, "Mulberry, U.S. Route 521, Camden, Kershaw County, SC." The other photo shows Lieber Correctional Institution in Ridgeville, South Carolina. The photo of the prison appears in an article in thetimes.co.uk. These two sites in South Carolina are located about a one-hour, 40-minute drive from each other -- they are not on the same land. The tweet's impossible narrative reads:

My great great great grand daddy was a large plantation owner in South Carolina. This is a picture of the house he lived in. He operated a massive cotton farm. The house doesn't exist anymore. But we built a state of an art prison on the land. He would be very proud right now. 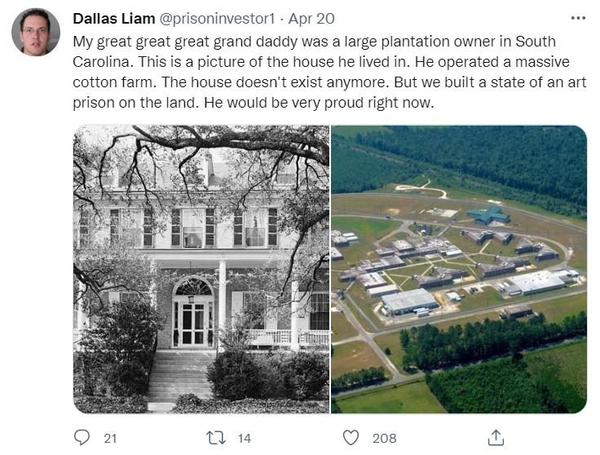 Lead Stories reached out to The GEO Group by email on April 25, 2022, and will update this article as appropriate if a response is received.

Lead Stories also reached out to the Twitter account of @prisoninvestor1 through direct message. They did respond, but did not offer a means to verify their identity, and said, "I shield my identity so I don't get hunted and killed by my haters." They also said that they did not do the interview that appears on frankreport.com, that it is fake, and that a post on Reddit was also not by them, but someone who stole their content "for clout on Reddit."