Did Europeans crowd onto a pier and try to flee to North Africa during World War II on the ship shown in this photo? No, that's not true: This image is miscaptioned. It shows the ship Vlora, which had left the port of Durrës, Albania, and crossed the Adriatic Sea in one day, arriving in Bari, Italy on August 8, 1991. This happened after the fall of communism in Albania. The number of refugees on the Vlora was estimated to be between 10,000 and 20,000.

When the ship arrived in Bari, Italian authorities did not allow the Albanian refugees to leave the dock -- that is the scene pictured. Eventually the refugees were taken to a stadium where conditions were terrible. In the following days most of the refugees were transported back to Albania.

A miscaptioned social media post that circulated in 2015 has recently resurfaced. The 2015 screenshot was posted on a messageboard, and then a screenshot of that post was posted on Facebook by the page Burds ARE Real on May 1, 2022. The text in the screenshot reads:

These aren't Syrians. They're Europeans trying to get to North Africa during World War II. So next time you think of closing the borders you might want to check with your grandparents. 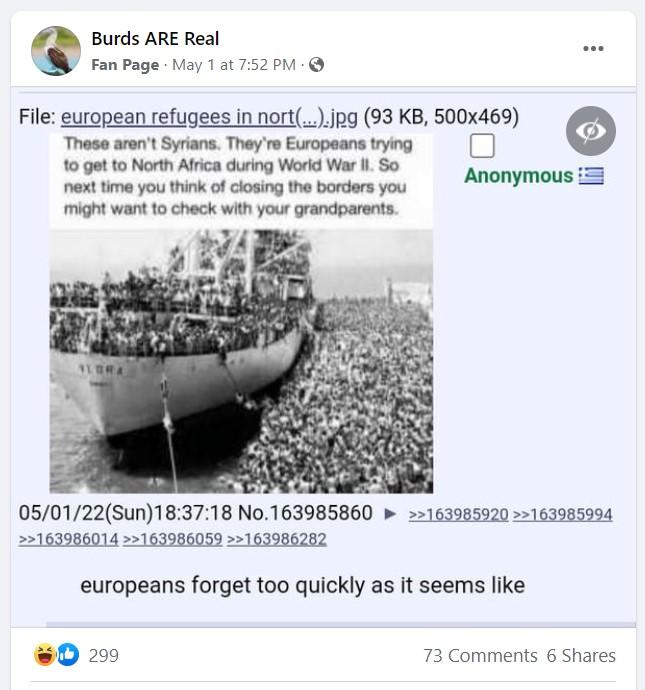 This photo does not show an event from Wolrd War II.

A color version of this photo showing the ship Vlora in the port of Bari can be seen in an August 9, 2021, article on contropiano.org (archived here). The article's title translated to English by Google reads, "30 years ago the landing of the Albanians in Bari: an Italian shame." The article begins:

30 years ago the landing of 20 thousand Albanians in Bari

On 8 August 1991 the merchant ship Vlora arrived in Puglia, full of human beings huddled together like sardines.

As soon as they managed to get off the ship, the migrants were locked up en masse inside the Vittoria stadium in Bari in appalling sanitary conditions, with very little food and little water: an inhumane treatment, more at the behest of the government than local authorities, which they showed much more understanding and solidarity with migrants. 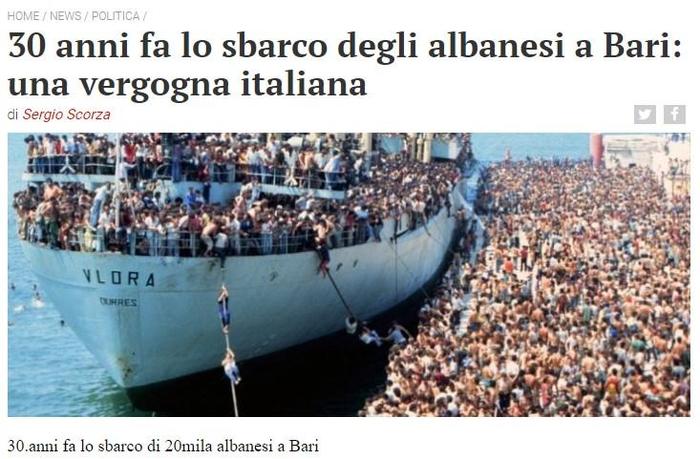 Mentioned in the contropiano.org article is the 2012 documentary "La nave dolce," about the 1991 incident. The seemingly ironic title, "The Sweet Ship," springs from the Vlora having been a merchant ship that carried sugar from Cuba to Albania. The documentary contains color footage of the passage and aftermath, including footage that was shot from helicopters showing the ship underway (21:51 minutes in).

Another set of photos of the Vlora, these in color, also circulated on social media with a false caption. This example originally circulated on Facebook in 2015, and was posted on Twitter (archived here) on April 16, 2022.

The caption in the screenshot reads:

These aren't Syrians, Libyans or Africans; they are Europeans trying to get to North Africa during the last world war. So, next time you think of closing the borders you might want to check with your grandparents.
Save a refugee. Save a life. 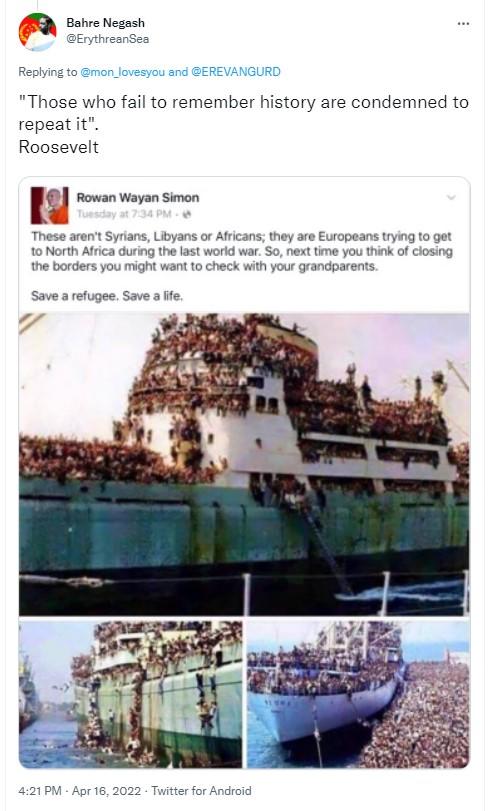 While outside the scope of this fact check, the quote in the tweet, "Those who [cannot] fail to remember history [the past] are condemned to repeat it," is misattributed. It was not former President Franklin Delano Roosevelt who said this but philosopher George Santayana in 1905. The quote was later paraphrased by Winston Churchill in 1948, "Those who fail to learn from history are condemned to repeat it."