Did an ominous cloud signal the end of the world? No, that's not true: This shelf cloud was photographed in Anna, Illinois, in 2018 and the world hasn't ended in the years since.

The video of a dramatic cloud moving toward the parking lot of a Walmart shopping center was captured by Maranda Marie Benefield in Anna, Illinois, on August 7, 2018. She posted the images on Facebook and they soon went viral. The video recently resurfaced, where it was posted on Facebook again by a different person on May 3, 2022. It was captioned:

End of The World and it's starting at Walmart.
Fair use notice. 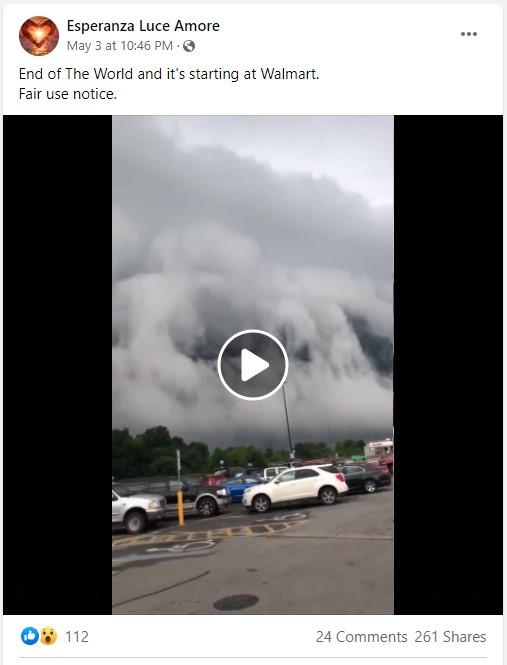 Benefield's images of the cloud went viral and appeared in news station weather features in places as far away as Tampa, Florida. This wtsp.com weather feature about the images includes an infographic about how a shelf cloud forms. The illustration shows the sharp contrast between the cold air of the gust front (blue), which rushes out ahead of the storm cloud, and the warm moist air (red), which is displaced and lifted by the cold gust front. 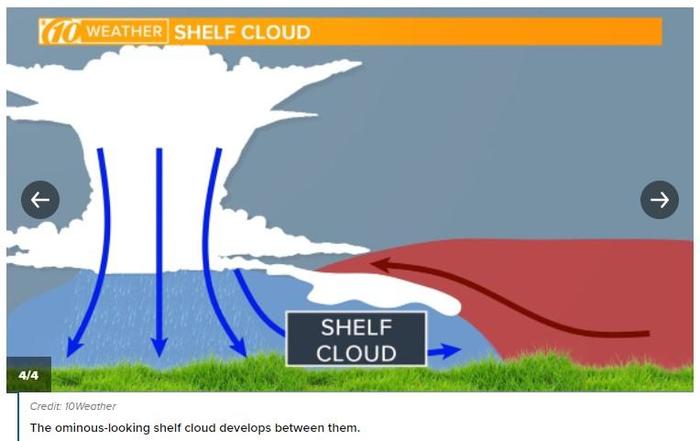 Although dramatic to see, this cloud did not produce a strong thunderstorm. The National Weather Service report of "Storm Data and Unusual Weather Phenomena" from August 2018 does not list a storm on August 7, and the National Oceanic and Atmospheric Administration (NOAA) does not have any storm events recorded in Union County, Illinois, in the month of August 2018.

Additional photos of this August 7, 2018, cloud taken by Donna Smith were posted on Twitter by meteorologist Beau Dodson.

Not every shelf cloud has the ragged appearance of the cloud featured. These jagged features, which some people think look like fingers reaching down, are called fractus clouds. They gave this shelf cloud a waterfall-like appearance. Surprisingly, the direction these jagged clouds move is not down, but upward with the warm air draft. This upward action is apparent in this time-lapse video of a different shelf cloud taken in Cleveland in 2016.