Can HIV be reversed naturally? No, that's not true: "Unfortunately not," Dr. Monica Ghandi, an HIV and infectious disease specialist, told Lead Stories. A video with a headline making the claim about HIV never gives specific proof of how HIV can be naturally reversed. The speaker in the video only implies that boosting one's immune system could help but provides no specific method for reversing HIV naturally and makes several false claims about HIV that experts denied.

The claim appeared as a video published on Facebook on April 25, 2022, under the title "Instagram just deleted this video. How to reverse HIV naturally ! Take notes and improve your life! All praises due to the most high!! #ministerofhealth #yada #yadadiannation." One of the individuals in the video opened it by saying:

So, now, we have to understand that HIV was an invention created by the West. 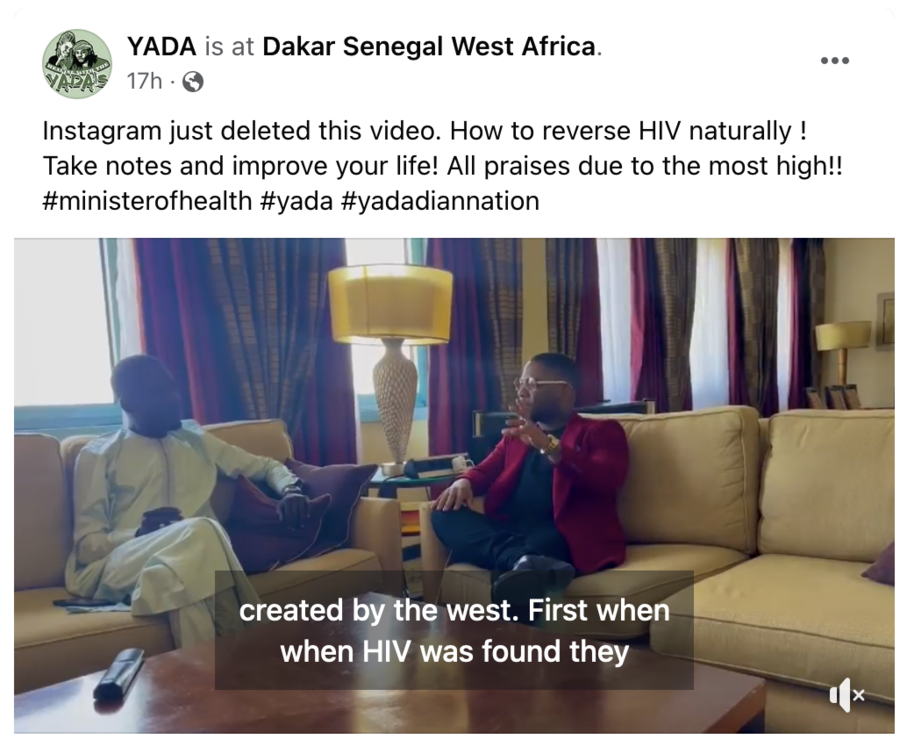 The six-minute and 20-second video was posted by a man named Yahdan Yada who calls himself an herbalist on his website. He makes multiple false claims about HIV, beginning with the headline that offers knowledge on "How to reverse HIV naturally," providing no proof of a way to cure a person once they have contracted HIV.

Lead Stories spoke with Ghandi, director of the UCSF-Bay Area Center for AIDS Research (CFAR), professor of medicine, associate chief of the Division of HIV, Infectious Diseases, and Global Medicine and medical director of "Ward 86" HIV Clinic, San Francisco General Hospital, via telephone on May 13, 2022. She explained that HIV cannot be naturally reversed because it is a retrovirus, which is described by the National Institutes of Health as:

A retrovirus is a virus that uses RNA as its genomic material. Upon infection with a retrovirus, a cell converts the retroviral RNA into DNA, which in turn is inserted into the DNA of the host cell. The cell then produces more retroviruses, which infect other cells.

Gandhi said the only way to treat a retrovirus is, "to suppress the virus from replicating by giving antiviral treatments. And it really is not possible to reverse naturally through immune enhancements or anything that people can take."

Richard Jeffreys, the Basic Science, Vaccines and Cure Project director with Treatment Action Group, also spoke with Lead Stories via telephone on May 13, 2022, and said that the claim that HIV could be reversed naturally was "not true":

As you can imagine, in the days before there was effective treatment, people tried everything and it didn't work. Good nutrition is good for health, but it can't cure HIV infection.

He expanded on the ways HIV directly targets the immune system cells, which is why a person cannot treat or cure HIV by boosting their immune system without drugs:

It's undermining the ability of the body to actually suppress HIV by targeting the immune cells that should be leading the work. It infects those cells, it damages those cells and their functionality and that's what allows the virus to keep replicating in the absence of treatment.

It's the specific immune response to the virus where there's a problem and that's what's going to need to probably be fixed to obtain a long-term cure. Thankfully we have treatments which can suppress the application and that does act as a cure for, for the most severe manifestation of the disease, namely AIDS.

At the 3:04-mark of the video, Yada says, "...it is highly important for us to eat foods that go with our genetics and the foods of our ancestors before the colonizers came and promoted certain foods." Gandhi addressed the claim that changing a diet would naturally reverse HIV:

There are certainly long-standing kinds of nutritional differences and how people eat and the things that they eat and herbs or other natural treatments that people have used across cultures. I would certainly applaud anyone's focus on their own health. But, it's really the nature of the virus that, even if you work with your kind of genetics, even across different populations, HIV is able to infect diverse populations. There's never been a group that is able to not be infected except for one exception.
We're really well aware of that, none of those supplements or different nutritional practices or different kinds of working with genetics is going to reverse the fact that the virus intercalates within our chromosome. Which is why it's a chronic viral infection.

At the 4:58-mark of the video, Yada claims, "Now they started giving these people drugs for HIV and people that didn't even have HIV started taking the drug and got HIV. This is all documented, bro. They didn't have HIV: they was misdiagnosed, took the HIV medication and got HIV."

Jeffreys explained that this was not possible, explaining that "AIDS denialism" contributed to such misinformation:

No, you can't put a retrovirus into a drug and have it survive. In the early days, some of the treatments were not pleasant but they've gotten a lot better. And they don't cause AIDS.